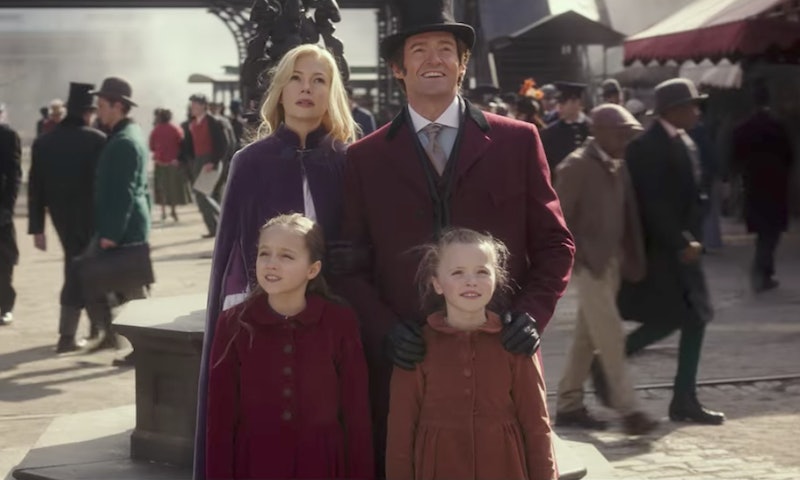 With every successful modern movie musical comes the predictive industry pieces: is the movie musical finally back to its studio system glory days? Though 2016's La La Land took some heat for its simplistic take on the history of jazz, the bittersweet romance was a hit overall — critically, amongst audiences, and during awards season. So, does Hugh Jackman's new starring turn as career entertainer P.T. Barnum owe something to the Damien Chazelle film? The latter may have warmed audiences to song-and-dance again, but The Greatest Showman isn't the next La La Land. Not all musicals are created equal, nor should they be.

The vast difference between the two is evident in the first trailer for The Greatest Showman, which was released on June 28. But almost no information about the film — except for the various superstar and newcomer names involved — was available to me before I visited its Brooklyn set earlier this year. I had to wait until I walked into a repurposed Williamsburg armory to understand the scope of the project. And that turned out to be a full-size big top populated by dozens of costumed extras; real circus performers contorting their bodies, flying through the air, and throwing things that are on fire; world-class dancers; and Jackman at the center of it all, in the most resplendent, reddest tails you've ever seen. La La Land is about a brief relationship that helps two frustrated artists to flourish, but The Greatest Showman isn't just about the origins of the Barnum & Bailey Circus — it's about the birth of show business as we know it.

"I went back to him and said, 'Look, if you’re really gonna put The Greatest Showman above your head on a poster, you should really play to your strengths.'"

Jackman and The Greatest Showman have been a package deal throughout the movie's lengthy development process. Eventually, Jackman was joined by Zac Efron as Phillip, a potential collaborator with stars in his eyes and family money in his pocket; Michelle Williams as Barnum's wife Charity; Rebecca Ferguson as his Swedish opera-singing discovery Jenny Lind, and an ensemble portraying Barnum's "oddities," including Zendaya and Yahya Abdul-Mateen II as a sibling trapeze act. "What’s interesting about them is that they’re not oddities because they have an extra leg or horns or weird freaky tattoos or things," Abdul-Mateen says on set, "but they’re black trapeze artists during the 1800s... that definitely would have been rare at the time." The "heart" of the film, almost everyone the visiting press speaks to tells us, is the relationship between Barnum and the misfits he brings together.

"I went back to him and said, 'Look, if you’re really gonna put 'The Greatest Showman above your head on a poster, you should really play to your strengths,'" Gracey says. "And I grew up seeing him in Australia doing musicals. So I said it should be a musical. And that really naive remark has cost me seven years of my life, because it is so difficult to do an original musical."

Honestly, the director doesn't seem to be too broken up about the time spent. He's more eager to share the clips he has queued up for the assembled journalists and to get our take on them. He asks us to let him know, for example, if he's achieved his goal of making the first time Efron's Phillip sees Zendaya's Anne as dreamy and world-stopping as "when Tony sees Maria for the first time in West Side Story." When the clip stops rolling, we all murmur our entranced approval.

One clip that seems to be in the running for the most representative of the movie's vision is the intro to the opening and closing number, "The Greatest Show." Jackman stands underneath bleachers waiting to take the center ring, while audience members without an inch of space between any of them rhythmically stomp in anticipation above. It's inspired by scene in Steve Jobs, since Gracey considers both men similarly revolutionary. It's also a very unsubtle, Queen-esque reminder that The Greatest Showman isn't a period piece. The director describes it as "a storybook world. It’s not being faithful to the period; we have things that weren’t invented yet, but it feels of its own universe."

The result is a pop/period mash-up that would would make Baz Luhrmann blush. The film's costume designer Ellen Mirojnick tells us that she doesn't want the audience to be able to tie the looks she's created — inspired as much by avant garde designers as they are the big top — to any particular era, including the mid-1800s, when Barnum's career had really taken off. “Hopefully the audience is able to look at the whole movie and say, 'well that was delicious,'" she says.

And circus coordinator Matthieu Leopold had the same type of freedom to include more modern performance elements in his choreography. Leopold was responsible for casting the real circus acts featured in The Greatest Showman, but also had to get the actors who were new to this particular kind of entertaining up to speed. He choreographed Phillip and Anne's aerial love duet, "Rewrite The Stars," and has nothing but praise for Zendaya and Efron's work ethic and fearlessness. "They came in, smiles through the roof and just crushed it," he remembers.

The time-bending tone of the movie extends to its songs, as well. Though the Barnum spectacular isn't scheduled to hit theaters until Christmas Day 2017, composers Benj Pasek and Justin Paul's Oscars will have already collected a few layers of dust by then. But the team actually booked this flashy new movie musical long before they collected their trophies for writing La La Land's "City Of Stars," not to mention the Tonys heaped onto their Broadway musical, Dear Evan Hansen. Though it's taken longer — seven years, to be exact — to come to fruition than the movie that brought them to the Academy Awards, The Greatest Showman was the first major motion picture to book the young talents, and the teeth-cutting they did there helped them get acclimated to Hollywood. (It hasn't jaded them yet — before sitting down to take questions, Pasek and Paul shake hands with each of us.)

"We definitely were trying to be really chill about the whole thing," Paul says about being in the studio with Jackman. "We’d never met any celebrity before." When Jackman walked into another room, the two would silently freak out.

The composers worked closely with Gracey throughout the process as well, as he wanted the songs in the film to be both theatrical and familiar to a contemporary audience. Paul says that the director referenced "everything from Ingrid Michaelson to Kanye," as they honed the show's song list, and producers like Ryan Lewis were brought on board to add to the soundtrack's radio-friendly quality. "To get to work with these pop guys and find this interesting marriage between [pop and theater] has been a real adventure and a real journey for us," Pasek adds.

That stirring song that plays over the trailer is sung by Lettie Lutz, the circus's Beaded Lady, played by stage actor Keala Settle. "This Is Me" isn't easily confused with any of La La Land's old Hollywood numbers; it's a pop anthem that wouldn't sound out of place on Katy Perry's Prism album — though it's Settle's forceful and emotional vocal performance that took her all the way through the early-stage readings of the script (which, for musicals, are usually populated by lesser known actors who don't expect to be cast) to filming a big-budget holiday release. Her come-to-Jesus number is a response to Barnum turning away from his circus family when he's accepted by high society. It hurts so much, Settle says, because Barnum gives Lettie a life when he first meets and validates her.

"He looks at her and says, 'You’re beautiful and I’ve never seen someone like you in my life, and your voice takes my breath away, will you be a part of the circus?,'" Settle explains, with tears in her eyes. "And the second that that happens, and she realizes that one person, sorry, gives a sh*t about who she is, it's enough for her to at least start trying to repair who she is as a woman."

So though The Greatest Showman leans towards spectacle where La La Land chooses intimacy, the hope is that audiences will still emotionally connect to its band of outcasts and the visionary who brought them out of the shadows and in front of a crowd. "To celebrate one’s otherness," is how Abdul-Mateen sums up the film's message. "That if you’re different you still matter. And you matter, period."