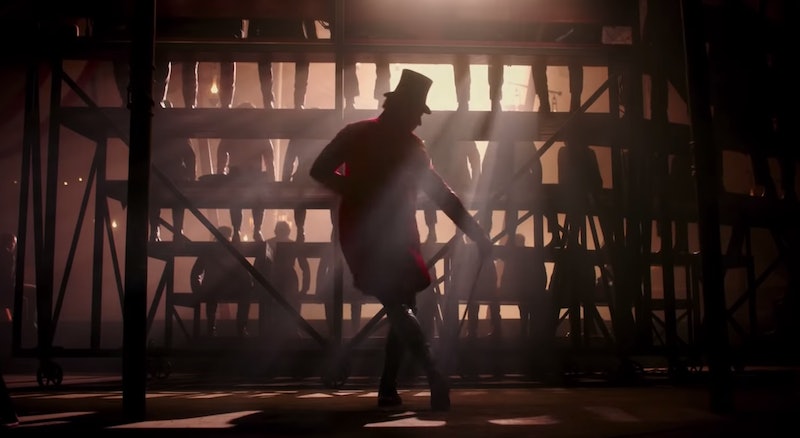 Probably one of the biggest sleeper hits of the past two years was The Greatest Showman. Now, over a year since its premiere The Greatest Showman sequel is in the works, but the star of it all, Hugh Jackman is cautioning fans not to get too excited quite yet. No doubt his newest statements will make fans of the film — "the third-highest grossing live-action musical of all-time," behind Beauty and the Beast and Grease, according to Deadline — both extremely happy, and, perhaps, a bit apprehensive.

Talk of a Greatest Showman sequel has been thrown around in interviews, especially by Jackman, who starred as P.T. Barnum, almost since it was released in theaters in late 2017. And the actor's latest update might give fans the hope they've so desperately needed. “The real answer is ‘could be,’ I’m not sure,” he said in an interview with Steve Wright’s Big Guests show on BBC Radio 2 Monday, April 1, according to the Evening Standard. “I’m being completely honest with you, there is talk of something going around but no one is really sure. But I think someone is working on a treatment for something," he said. "I know they are, they’re working on a treatment for something.” This likely means that someone is writing a pitch for the sequel, which, though it technically means that a Greatest Showman sequel is in the works, also means that it's not a done deal yet.

As Jackman said later in the interview, it took eight years to get The Greatest Showman in theaters, so having a treatment in process or being discussed doesn't necessarily mean fans will be seeing a sequel soon. But he did say that he'd like to be involved somehow. “I would like to be a part of it for sure, and I don’t know if it would be centered on my character,” he said.

This isn't the first time Jackman has voiced an interest in doing a Greatest Showman sequel. In an interview with Radio 5 in January, the actor emphasized that his decision to commit to a sequel would depend on the story and the timing. "If a genuine opportunity came up where it felt like the right thing to do, then yep, I'd get the top hat back out," he said. In that same interview, he also made sure to give credit to the fans, saying, "It's clear to me and to everyone that people love these characters. I loved this movie, I loved this character and it was one of the great joys of my life."

If, for some reason, there is a sequel without Jackman, it could easily focus on one of the many other characters form the film's ensemble. In fact, The Greatest Showman ended with Barnum handing over the circus to Phillip (Zac Efron), creating the perfect jumping off point for a sequel focusing on Efron's character.

It might take some rewriting in the stars, but if Jackman is telling the truth, then fans of The Greatest Showman should definitely be on the lookout for a potential sequel — with or without him.

More like this
The Trailer For The Whitney Houston Biopic Has Twitter Feeling Heated
By Radhika Menon
Olivia Wilde & Harry Styles' Relationship Timeline Started With 'Don’t Worry Darling'
By Jake Viswanath
Harry Styles’ Red Carpet Looks Have One Thing In Common
By El Hunt
Everything To Know About Taylor Swift’s 10th Studio Album, 'Midnights'
By Grace Wehniainen and Jake Viswanath
Get Even More From Bustle — Sign Up For The Newsletter