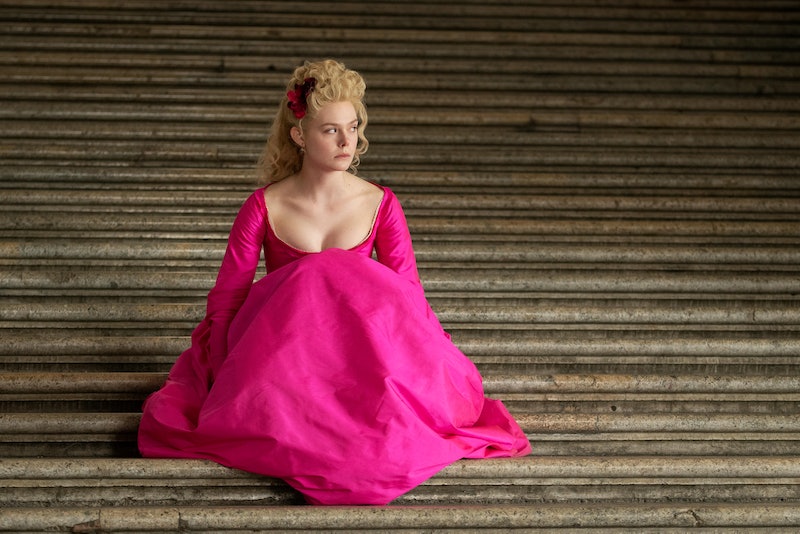 One of Hulu’s newest additions to its original lineup is The Great, starring Elle Fanning and Nicholas Hoult. It tells the story of Catherine the Great and her rise to power, living in Russia in the 18th century. The fashion from that era was so mesmerizing that it's still trending today, so costume designer Emma Fryer enjoyed recreating some of the most memorable looks of the time.

In rich tones, heavy silks, and luxe velvets, Fryer hit the ground running to costume the cast with an arsenal of period looks. She sourced the pieces from vintage stores as well as pulling from modern reinterpretations of fashion from the past. There were lace underpinnings, corsets, ruffled trim, and of course, endless rows of buttons.

Fashion from the 18th century is notorious for being painful to wear, from constricting corsets to tight footwear. But Fryer says the actors were committed to wearing the pieces even if they were a bit uncomfortable. "The cast were incredible wearing their corsets," she tells Bustle. "A few little tweaks were made in the making process so as to make them more comfortable to wear, but not many." As for the shoes, the cast found a way around the constant pain. "When [they] were blocking scenes, some did choose to wear more comfortable shoes before changing into their character footwear for shooting the scene. In some cases Wellington boots were worn for rehearsals."

Bustle caught up with Fryer to talk all things period fashion and the story behind the stunning costumes she created for Hulu’s The Great.

"[Transformation of Catherine’s power] was achieved with the color palette and pattern. When we first meet Catherine, she is a young girl looking for love and sunshine. The color choice for her clothes reflect this at the beginning. I used soft, romantic, whimsical colors with minimal decoration, silk jacquards with delicate self-pattern.

"Catherine’s colors were very different to the color of Peter’s court. The court palette was made up of rich jewel tones, winter fruits, dark reds, aubergine, gold, silver, plum, rusts, bronze. When Leo is given to Catherine as a gift, her color palette gently changes, still youthful, but more playful. I used similar colors for both characters, e.g. apple greens.

"As Catherine becomes stronger through the series and she starts to take actions, bolder color was introduced into Catherine’s wardrobe. Silk damask fabric with stronger pattern, plain silks that were more vivid and eye catching in color."

“Tony’s concept for the show was always very clear ‘fictionalized fun, incorporating historical facts, occasionally.’ I wanted this to be reflected in the costuming of the show. I referenced historical 18th century Russian, European clothes, looking at paintings and reference books of the period. I also explored contemporary fashion as a huge source of inspiration. Costumes weren’t copied from specific outfits from the time, but were designed and created incorporating the essence and elements of the 18th century wardrobe but with a modern, contemporary twist.”

“The underpinnings are so important to achieving the correct silhouette. With all the lead female cast, the starting point of building a costume was making the corset and the underpinnings. This sometimes had an influence on the final design of a costume. The cast were incredible wearing their corsets, a few little tweaks were made in the making process so as to make them more comfortable to wear, but not many. Wearing a period corset and correct underpinnings enabled cast to have the right posture and feel for the period, this was very important to them.”

“Costuming has to be from the feet up. Shoes are so important.

"I remember having a conversation in a fitting with a cast member about wearing the correct footwear. The right shoes were crucial to him, enabling him to create and feel right for the character. Both Catherine’s shoes and Peter’s boots were custom made for them.

"When cast were blocking scenes, some cast did choose to wear more comfortable shoes before changing into their character footwear for shooting the scene. In some cases Wellington boots were worn for rehearsals. ... For example for Catherine and Aunt Elizabeth before stepping out of the carriage into the mud at the Russian front!”

“Three workrooms were set up to build costumes for the show. Fabrics were sourced in the UK and Europe, mainly France and Italy. Trimmings and embellishments were sourced also in Europe and the UK. Costumes were adorned with decoration sourced from markets. Aunt Elizabeth’s costumes were decorated with lavish adornments, antique lace and trim, all sourced from vintage markets in London.”

“To choose ‘one [favorite] costume’ is so difficult. It was such a delicious project to costume, there are so many. I loved and definitely had so much fun costuming Peter, his punk rock, 18th century style. I adored Catherine’s pink dress in Episode 10 and her look for The Datcha, when she meets the Swedish king and queen. The coat Catherine wore in these scenes is the first piece of clothing not influenced by Western fashion. It has a more Russian feel, a move towards her embracing Russia and gaining strength and power.

“Some of the jewelry was antique. A lot of jewelry was sourced in Italy. In keeping with the costume design of the show, pieces chosen were an essence of 18th century Russia and Europe mixed with some contemporary jewelry pieces.”

"And 'buttons’ became a challenging world sometimes. A men’s coat needed between 25-30 buttons. I would find a delicious vintage button, perfect for a costume only to discover that there weren’t enough for a whole coat — just one or two not enough.”

“I had great fun costuming Peter, his capricious, sulky, paranoid, insecure character: 18th century punk rock, bad boy. I wanted to mismatch the fabrics in his costumes using a catwalk chic, contemporary style. I mixed textured gold, bronze, metallic leather breeches, with rich animalistic fabrics for his coats and linings, finished with a stock in an unconventional modern patterned fabric in silk or chiffon. His costumes became a delicious mix of mismatching and twisting of fabrics and textures, coming together to create a cool, modern vibe, tailored with an 18th century silhouette.”

Correction: A previous version of this story misidentified Elle Fanning. It has been updated.

More like this
Wait, Is Barney Stinson Related To Sophie On 'HIMYF'?
By Gretchen Smail
Everything To Know About 'Only Murders In The Building' Season 3
By Gretchen Smail and Kadin Burnett
15 Of Carrie Bradshaw’s Best Handbags From Sex & The City
By Dominique Norman
'Emily In Paris' Lucien Laviscount & Lucas Bravo Owned Paris Fashion Week
By El Hunt
Get Even More From Bustle — Sign Up For The Newsletter
From hair trends to relationship advice, our daily newsletter has everything you need to sound like a person who’s on TikTok, even if you aren’t.

This article was originally published on June 2, 2020