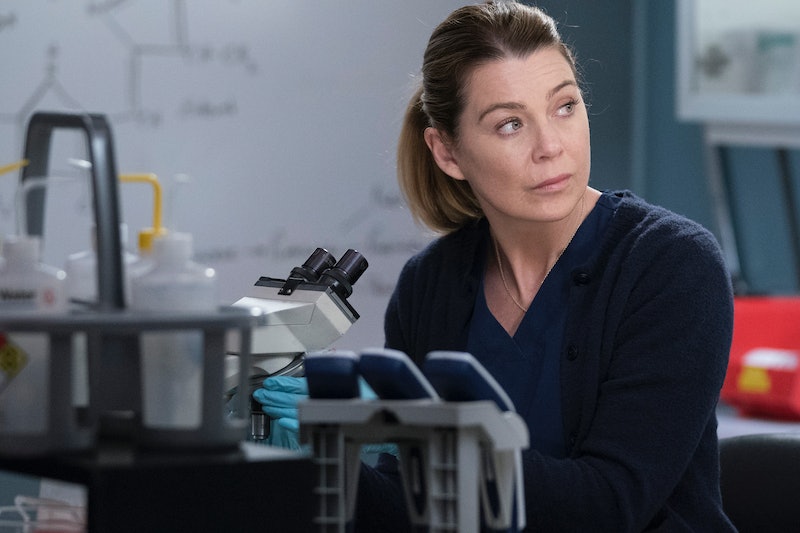 The doctors of Grey's Anatomy may spend a majority of their time saving the lives of fictional patience, but in reality, the actors themselves are doing their part to help make the world a better place. Just recently, the Grey's Anatomy cast granted a Make-a-Wish request, and the video footage alone is guaranteed to move you to tears. The popular ABC series recently partnered with the Make-a-Wish Foundation in order to make 17-year-old Isabelle's dream come true. Her ultimate goal? Getting the chance to meet Ellen Pompeo, AKA Meredith Grey herself. And as you can imagine, the cast and crew did everything in their power to make sure her visit was an unforgettable experience.

The official Grey's Anatomy Twitter account posted a video of Isabelle's time on set, where she not only got to meet several cast members, but was also given her very own set of scrubs and lab coat, along with a professional Grey Sloan Memorial badge. Oh, and then to top it off, she even got to direct a scene for an upcoming episode. To say that she had an absolute blast would be an understatement and the video footage of her special day is beyond sweet and will make you love the show even more — if that is at all possible.

"That was really cool," Isabelle can be seen saying in the clip. However, some Grey's fans may have noticed that, given that she is only 17 years old, the series would've come out when she was around just two or three years old. (Anyone else feeling super old right about now?) Obviously, she wasn't watching the show at that young of an age, but it just goes to show how great it is to have streaming services like Netflix around so that future generations can enjoy TV shows and movies from any era in time.

Giacomo Gianniotti, who plays Dr. Andrew DeLuca on the series, truly believes that this is why Grey's remains just as popular as ever to this day. "We're still having all these great ratings and people are showing up for it," he told E! News during a recent interview, adding:

"It's a real blessing, it's exciting. Netflix has really reopened this whole thing—having Grey's Anatomy released on Netflix, I think mothers who grew up watching it in their sort of teens and college are now watching it with their daughters. It's sort of reintroducing it to a new generation that didn't grow up with it, obviously."

Given that the show is now currently in the process of filming its fifteenth season, it's hard to mess with that logic. And while there's been some debate about how much longer the series will go on for, right now it remains a small screen favorite among many. In fact, it just became the longest running medical drama, surpassing the likes of ER. And when you factor in that Grey's has granted 17 wishes just like Isabelle's throughout its 15-season-run, it deserves to stick around for however long it wants.

More like this
Meet The New Team Of Residents Joining 'Grey's Anatomy' In Season 19
By Brad Witter and Sophia Moore
Netflix Just Rebooted A Classic ‘90s High School Drama
By Maxine Harrison
Every Horror Movie Reference In The 'PLL: Original Sin' Premiere
By Alyssa Lapid
You Can Now FaceTime With 'Bridgerton's Regé-Jean Page
By El Hunt
Get Even More From Bustle — Sign Up For The Newsletter