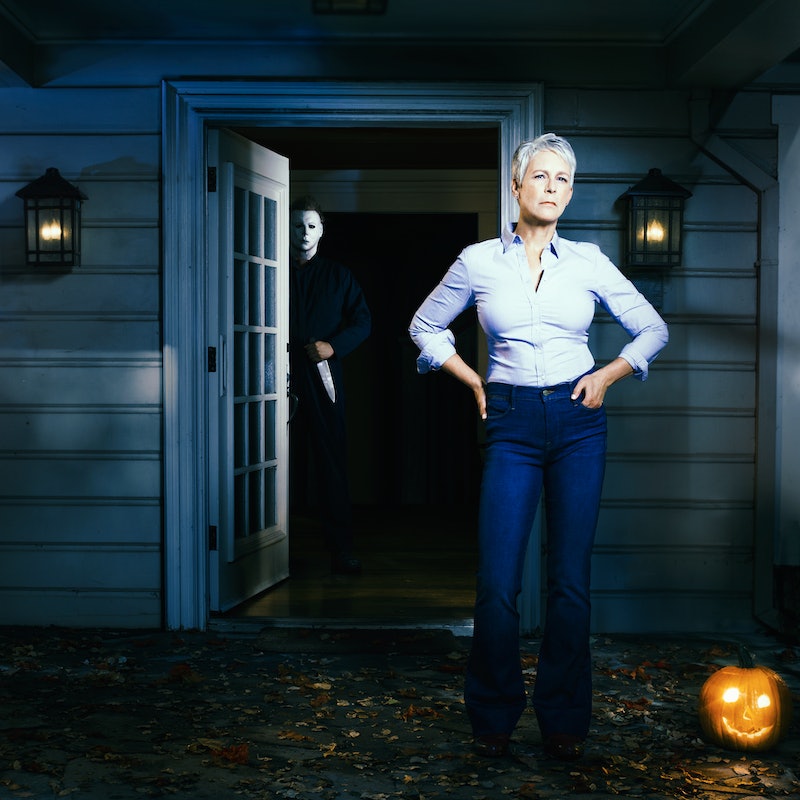 Major spoilers ahead. The new Halloween movie, out Oct. 19, beckons to fans of the 1978 original Halloween to return to the story that started 40 years ago. Even though the original 1978 Halloween led to the release of nine other movies about spooky killer Michael Myers over the next 31 years, the new Halloween disregards all of them. Everything about the new movie is about as terrifying as scary movie fans would hope, but the Halloween 2018 ending could go down in horror history for being equally empowering and freaky.

As mentioned before, 2018's Halloween sort of picks up after 1978's Halloween ended, but it doesn't just pretend that those 40 years didn't pass by. Jamie Lee Curtis returns as Laurie Strode, but she's now a grandmother and a survivalist who practices shooting and rigs up her home security in fear of Michael Myers' return. Well, most of those Halloween movies have one thing in common: Michael Myers always returns, and of course he does so in this year's Halloween. In the new movie, however, Laurie doesn't have to face the killer alone.

Laurie, her daughter Karen (Judy Greer), and her granddaughter Allyson (Andi Matichak) end up fighting Michael towards the end of the movie, and they prove that Laurie's survivalist efforts paid off, even though they isolated her from her family for years. But that hidden shelter underneath the kitchen island ends up coming in handy. Early in the movie, Michael Myers escaped institutionalization during a patient transfer and Halloween night for Laurie, her family, and the rest of the town is ruined. After various people lose their lives to Myer's horrific attacks, Laurie, Karen, and Allyson, end up trapping Michael in the hidden shelter beneath the kitchen, which Laurie and Karen know is actually a trap. Pretty genius. Once Michael goes into the trap, Karen uses a flare to start a blaze that the house was rigged for, seemingly burning the masked killer alive.

Another pattern that anyone Halloween would know is that Michael Myers doesn't seem to ever really die. Either you think Michael Myers dies and it's a decoy killer, or sometimes the serial killer just cheats death for no apparent reason.

If you wait until the very end of the credits of this Halloween, you'll hear the haunting sound of Michael's heavy breathing. So even though the ending to this sequel portrays a badass group effort of three generations of women to defeat Michael Myers, their seemingly fool-proof trap may not have been Michael-proof, because maybe nothing actually is.

But comparing the endings of the 1978 low-budget horror movie that was Halloween to the new version shows just how much Laurie Strode has changed after her first encounter with Michael Myers. In the first movie, Laurie finds herself suspecting a "boogyman" following her, and she's drastically unprepared when actually encountering Michael Myers, even though she does survive. But in the new movie, Laurie's totally ready to fight, no matter what anyone thinks. So as scary as it is, the new version of Halloween may have you cheering as much as it has you grimacing and shielding your eyes.