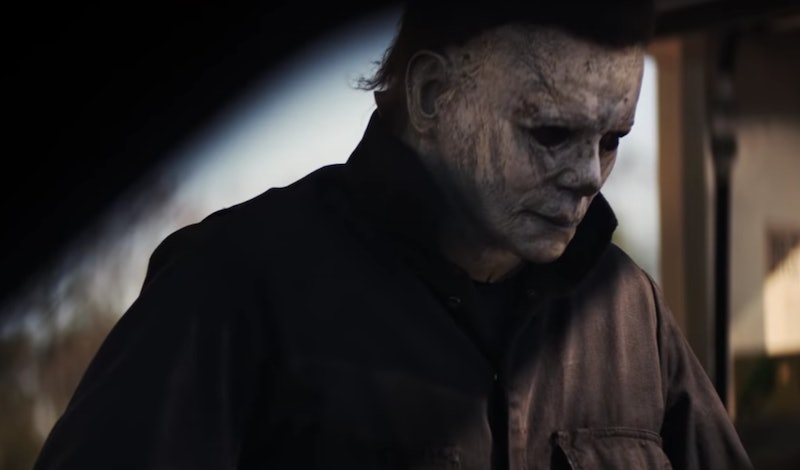 Caution: major spoilers ahead. Once again, it's Halloween time, and there's only one horror movie franchise boasts the holiday's very name. A total of 10 movies have come out in the past 40 years as part of the franchise, and the new Halloween, out Oct. 19, is the eleventh installment. But it probably won't be the last. Despite Laurie Strode's (Jamie Lee Curtis) triumphant feat in burning Michael Myers alive at the end of the new movie, the Halloween post-credits scene proves that the spooky series might just go on forever. Because burning Michael Myers alive doesn't necessarily mean he's dead, duh.

There is no traditional post-credits scene after Laurie, her daughter (Judy Greer), and her granddaughter (Andi Matichak) capture and burn Michael Myers in the hidden room beneath the kitchen island. Instead, if you stay to the very end of the credits, you'll just hear the horrific serial killer's signature heavy breathing. And that development cements what Halloween fans have known for a long time, which is that Michael Myers doesn't ever really die.

Even though the 2018 Halloween disregards all of the sequels that came after the original 1978 Halloween, the post-credits noise seems to nod to the other 10 sequels that came out between '78 and '09, many of which feature Michael Myers coming back to life after seeming to die at the end of the previous installments. In fact, the 2018 Halloween isn't even the first one to end with Michael Myers burning alive, as 1981's Halloween II ends with Michael and Dr. Sam Loomis (Donald Pleasence) apparently dying in a fire.

1982's Halloween III followed a complete different storyline from the original two of the series. Then the fourth installment, 1988's Halloween 4 picked back up the thread of Halloween II. The 1988 movie revealed that Laurie (Curtis) was dead, but that Michael and Dr. Loomis had somehow survived the fire that had supposedly killed them in the end of '82's Halloween II. In Halloween 4, Michael Myers and Dr. Loomis both had scars — you could see Michael's on his hands and Loomis's on his face — but you never really receive too much of an explanation as to how they survived the inferno which should have ended them.

The Halloween series that has unfolded over the past 40 years is almost more fun because of the frequent fake-out deaths of its iconic baddie. Even more fun is the fact that Michael Myers and Dr. Loomis aren't the only characters to cheat death. Laurie Strode even returned after the series had killed her off for 1998's 20th anniversary movie Halloween: H20. So it turns out that Halloween 4 only posited that Laurie had died, but H20 ended up revealing that Curtis's character had actually faked her death.

Call it the magic of Halloween the magic of Hollywood, but the characters from the beloved Halloween series have a way with coming to life even after they're shown dying on screen. (Though, to be fair, we don't see Michael's body at the end of the 2018 movie.) The end of this new Halloween honors that longstanding tradition and sets it up for Michael Myers to return again in yet another installment.

More like this
Judi Dench Isn’t The Only Surprise Cameo You’ll See In Christmas Movie Spirited
By Sophie McEvoy
The 'Love, Lizzo' Harry Styles Scene Is Just 1 Moment That Made Fans Feel Seen
By Brad Witter
Blake Lively's Reaction To Ryan Reynolds' Dance Video Was Pure Thirst
By Stephanie Topacio Long
Emma Corrin Spoke Out Against “Clickbait” Headlines Surrounding Gender Conversations
By El Hunt
Get Even More From Bustle — Sign Up For The Newsletter