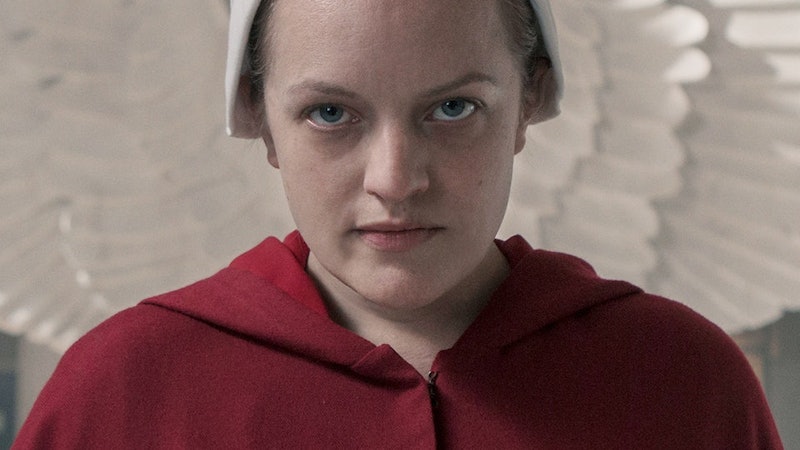 The Handmaid’s Tale is full of warnings.

More than three decades after its 1985 release, Margaret Atwood’s dystopian story has re-entered the zeitgeist, thanks to an acclaimed Hulu series and an anticipated sequel, The Testaments, due in September. Recent legal crackdowns on reproductive freedoms have made the red dress and white bonnet (dubbed the "protest uniform of 2019") recognizable in resistance movements all over the world. But the threat to reproductive rights isn’t the only warning found in Atwood’s tale. The world is in the middle of an unprecedented climate crisis, and scientists from the United Nations warn that humans have only a decade to stop the destruction and create a livable planet. It's time to revisit the other warnings The Handmaid’s Tale delivers — the ones about environmental breakdown, human survival, and all that is at stake.

Environmental crisis is the backdrop of Margaret Atwood’s dystopian storyline. "The air got too full, once, of chemicals, rays, radiation, the water swarmed with toxic molecules," Offred tells the reader. She's describing The Republic of Gilead, a totalitarian state that arose out of environmental chaos, including nuclear war, waste producing uncontrollable radiation, toxic pollution, and ecosystem breakdown. "Meanwhile [these toxins] creep into your body, camp out in your fatty cells," Offred says. "Who knows, your very flesh may be polluted, dirty as an oily beach, sure death to shore birds and unborn babies." Just as the pollution infects beaches and animals, it affects bodies too, severely damaging the ability of people with uteruses to reproduce. With the very future of humankind thrown into question, those who can reproduce — primarily cis women — are forced to bear children for the wealthy ruling class of men.

Eleanor Rowe, an English scholar at Brown University who studies gender and culture in literature, tells Bustle that Margaret Atwood’s work, including The Handmaid’s Tale, typically centers themes of nature, gender, and power. “Atwood calls much of her writing 'speculative fiction,' meaning that she is thinking and writing about things that really could happen or have already happened," Rowe says. "Across her body of work, there is a recurrent theme of the dangers of putting women’s bodies up as collateral against the perils of a frightening or unstable world. The spectre of a potentially unlivable environment, and the consequent idea held by those in power within the text that humanity must persist at any cost, regardless of who is harmed, is woven very intensely into The Handmaid’s Tale."

Like Rowe describes, in Gilead, reproductive justice is the collateral damage in humankind’s frantic attempt to survive the environmental crisis. With only one of every four women in Gilead able to reproduce, the government believed they faced a choice: Force them to give birth, or allow the population to decline until human extinction. Reproductive servitude is justified as the only way to ensure human survival.

Many reproductive and environmental justice activists understand that racial and economic justice are at the core of their respective struggles. Decades of environmental racism have produced vast racial disparities in terms of where toxic waste facilities are located and which communities suffer the health ramifications of this proximity. Legacies of unregulated toxic pollution, which can produce devastating reproductive health consequences — including low birth weights, infertility, birth defects, and reproductive cancers — affect communities of color far more than white communities. In the fictional and futuristic world of Gilead, the internal reproductive organs of people, regardless of race, are affected equally by toxic poisoning. This has not been the case historically, and is not the case today. The dystopian world of Gilead is a fictionalized place where reproductive justice is believed to be a necessary sacrifice to solve the environmental crisis. In real life, many people of color, particularly those who are poor, have been — and are being — marginalized by reproductive and environmental injustices.

Atwood’s message from 1985 was built on environmental concerns of the time, like pollution, toxic radiation, and population growth. Thirty-four years later, environmental concern is centralized around climate change, and an explicit shift in the television series reflects that. The show’s narrative of environmental degradation shows Gilead decreasing their fossil fuel emissions, transitioning into an organic, sustainable agricultural system, and ending exponential consumption of material goods. Gilead acted to stop climate change; it just sacrificed any semblance of human rights and dignity in order to do so.

"This novel allows us to see that it’s not just in a dystopian future that women’s bodies are threatened, brutalized, and made into sacrificial offerings that might be held up in support of something like a 'greater good,'" Rowe says. "Stories like this should make us reflect very deliberately both on contemporary inequality, and the way that the value of women is weighed in our society."

Yes, The Handmaid’s Tale is a cautionary tale of reproductive injustice at its worst. But just like in the real world, reproductive justice is not a stand-alone issue, separate from other contemporary racial and environmental inequalities. The novel should remind readers that reproductive justice and climate justice are connected struggles, and that leaders cannot confront climate change by viewing human rights as a necessary sacrifice. Gilead paints a dark picture of what this could look like, when human survival for the privileged few is prioritized over the fundamental rights of all. It’s not just about acting to stop climate change — it’s about acting on climate change with justice as the driving force. This is the ultimate warning readers can take from Margaret Atwood through her illustration of Gilead’s violence and environmental breakdown: If justice is sacrificed to stop climate change, the world won’t be worth living in.