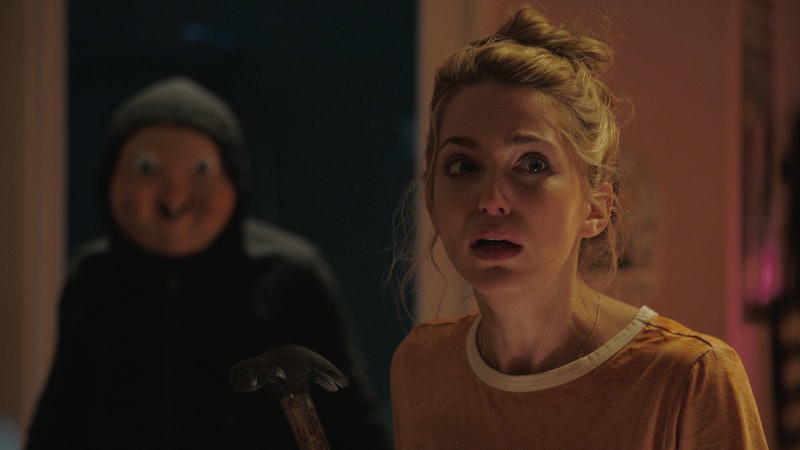 Two things you should know about me. First, I love scary movies, especially when those scary movies have a touch of fun. The second is that I absolutely live for Halloween. And if these are two statements that you wholeheartedly relate to, then you need to stop what you're doing and watch the first trailer for Happy Death Day immediately. Due for release on the appropriate day of Friday, Oct. 13 (the most ghoulish of horror dates when knife-happy goons like Jason Voorhees like to get busy), Happy Death Day looks like a slasher take on Groundhog Day with a side of campy Scream Queens humor, and I'm so into it already it's unreal. So into it that I'm going to just come right out and say it: Happy Death Day could rule Halloween 2017. I want tickets now.

The movie follows a college student who has to relive the same day over and over again. So far, so very Bill Murray, right? Except the twist here is that our long-suffering protagonist is murdered every time and will be forced to repeat the same horrifying day on a loop until she can figure out the identity of the masked killer preying on her. The killer incidentally wears a baby mask, because as that terrifying episode of the Rugrats proved, being chased by a giant baby is the thing of nightmares.

As a longtime fan of the slasher genre, I'm beyond happy to see that a mainstream horror movie has finally returned to it. Though we've had TV shows like Scream, Slasher, and Scream Queens all bringing slasher themes to the small screen with pretty great finesse, it's been a while since we've gotten to properly enjoy a new one in theaters.

One of the most satisfying things about the first trailer for Happy Death Day is that it also looks like as though it's doing something fresh and fun with the genre, while still playing with classic tropes. And that's something that's always given slashers, and the horror genre in general, fresh life.

Back in the late '70s and early '80s, movies like Halloween and Friday The 13th managed to establish a whole new era of horror, and in the '90s, Scream heralded a horror renewal where movies outsmarted the tropes of their predecessors. Of course, by the '00s, movies like the Saw franchise and Hostel edged away from tradition, establishing this period of horror as a time of nihilistic brutality. Hopefully, the release of Happy Death Day may be the movie of the '10s that helps to kickstart a whole new exciting era of horror and a return of the traditional slasher movie. I'm so ready for that to happen.

Seriously, sign me up right now. Because I'm here for everything that this trailer is serving up (including that fine-looking cake), and can't wait to give it all my best screams this Halloween.