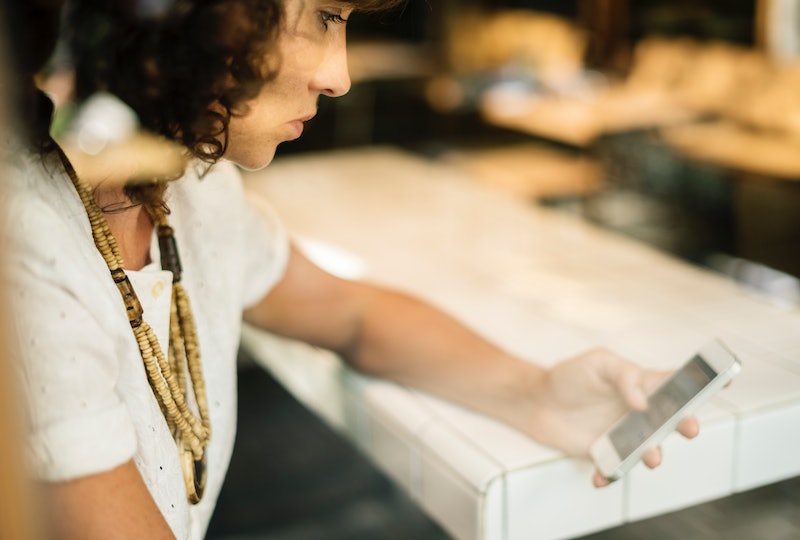 Almost every hour, there is a new report detailing the horrific details of Harvey Weinstein's alleged assaults on women. Ashley Judd and Gwyneth Paltrow claimed he asked them to give or receive massages from him. Italian actor Asia Argento alleged he raped her when he invited her to his hotel room for a party, but instead she found herself alone with him. And then there was the especially monstrous New Yorker audio recording in which Weinstein admitting to groping a model's breast and tried to force her to sit alone with him — so she did not "embarrass" him. (Sallie Hofmeister, Weinstein's spokesperson, insists all contact was consensual.) The reports are disturbing to nearly everyone, but for sexual assault survivors, they're especially traumatic.

Survivors have a particularly fragile relationship with news on sexual harassment and assault, as they may trigger memories from their very own past. Every tweet, every article, every new revelation can cause a survivor to be re-traumatized, resulting in panic attacks, flashbacks, or feelings of helplessness and hopelessness — all signs of post-traumatic stress disorder.

Here's how you can support those people in your life who have been triggered by all the graphic, disturbing details.

Jessica Moreno, community initiatives expert at the national anti-abuse organization Break the Cycle tells Bustle that it is more than OK to step away from the screen. "Culturally," Moreno says, "we've convinced each other that if we unplug, we'll miss out on the next big story, bargain, or life event."

So how can allies help? It's a good idea not to force someone to watch the news or read Twitter updates on the report. "Give yourself and others permission to turn 'it' off." Moreno says survivors may not be able to switch their memories off, but how they consume media is still within their control.

"While survivors cannot 'turn off' their lived experiences, we can all be mindful of the amount of toxic content we let in," she says. This also means if you know someone is likely to feel triggered by the case, don't expose them to it needlessly.

Moreno suggests an online wellness plan. Friends of survivors can offer pleasant videos or photos that calm one's nerves. "Just like too much toxic media can shift our mood over time," Moreno says, "so can the warm and fuzzy or silly content. Many of us have our go-to wellness favorites. ... If your lunch break ritual is to catch as many cute puppy videos before break's over, you are practicing online wellness."

Moreno says it's important to counter toxicity in media. "Whatever your go-to media source is, it's increasingly important to have content that uplifts you, makes you laugh, or generally helps balance out the dose of toxic media available to us," Moreno says.

Acknowledge That Their Feelings Are OK

Sonia Ossorio, president of the National Organization for Women, New York, says allies can help by validating the feelings of survivors. "It's key that survivors acknowledge that it's OK that they are feeling overwhelmed and to consider reaching out for extra support," Ossorio suggests, while recommending that survivors reach out to national hotlines like RAINN.

Ossorio says that there is a silver lining to these reports. Perhaps such optimism can be offered to survivors through their friends and family.

"Although the onslaught of terrible headlines can be unquestionably difficult," she says, "the positive side is that women coming forward are able to recognize that they are not alone. In the [alleged] case of Harvey Weinstein, we can see that there is a shift underway in public attitudes toward sexual assault and sexual harassment and that this is resulting in perpetrators facing some real consequences."

Encourage Them To Talk To Advocates

Allies can recommend survivors to talk to trained peer advocates if they feel overwhelmed. Moreno suggests a chat program at the Love Is Respect website.

"Being online is becoming more and more like real life," Moreno says. "When tough stuff happens to us in real life, we would call a friend or be connected to sources of support. The same applies online. If online content is hurting your heart, it's OK to say so."

If you're not a survivor and still want to help, don't worry. According to Moreno:

Anyone can be a support to survivors. You don’t have to be a counselor or therapist. The best thing you can do for a survivor is listen without judgement, and validate their experience and feelings.

Being there for a survivor seems like the most healing gesture from an ally. Survivors "just want to know you will stand by them and not feel like they are a weirdo now that you know their story," Moreno says. "Avoid the temptation to quickly move away from this hard and possibly uncomfortable conversation. Approach with love and let them know you appreciate them trusting you with their story."

It comes down to switching off for survivors and being humanely present for allies. In our media landscape, these two seemingly simple acts can be incredibly helpful. After all, as human beings, we aren't psychologically built to read and process endless reports of trauma, abuse, and violence on such a grimly constant basis.

It's absolutely normal and even healthy to step away from the screen or kindly suggest the same to a friend who may feel overwhelmed and triggered by the inundation of these reports. Your well-being, and that of your loved ones, is top priority.