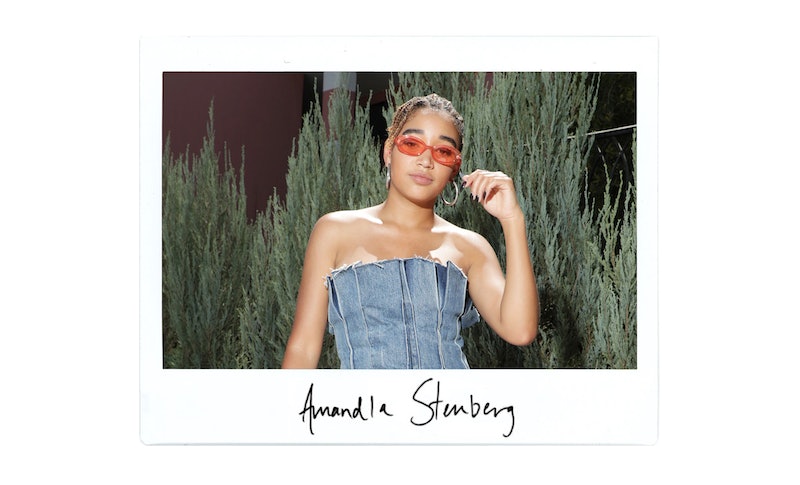 When celebrities hang out with Bustle editors, we want to give them the chance to leave their mark. Literally. So we hand them a pen, a piece of paper, a few questions, and ask them to get creative. The rest is up to them. This time, Amandla Stenberg is leaving her mark in the Bustle Booth.

Amandla Stenberg is the coolest person at this party. I'm sure that's a general rule at most events the 20-year-old actress and activist attends, but the party we're both currently at is not your run-of-the-mill, coolers-of-beer and bags-of-potato-chips kind of bash. We're at the Levi's Party in Indian Wells for Coachella weekend and the guest list is stacked with notable uber-cool, uber-stylish celebrities aplenty.

There's Hailey Bieber in her loose-fit 501s, St. Vincent in a Hawaiian shirt behind the turntables, Jaden Smith beaming from his neon pink hair, and Snoop Dogg being, well, Snoop Dogg. And yet, while all of their outfits are worth fawning over, Stenberg still manages to stand out. Maybe it's her inherent swag and confidence that emanates from her as she lounges by the hotel pool, red goggle sunglasses shielding her face from the desert sun. Or perhaps it has to do with her 90s-inspired, all denim ensemble, which includes a pair of baggy wide-leg jeans, a distressed denim corset, and chunky sneakers. The answer: It's all of it.

Of course, Stenberg is more than just a cool party girl. In 2015 and 2016, TIME magazine named Stenberg one of the most influential teens, commending her for speaking out against cultural appropriation and the gender binary. Besides being a social activist, she's also been extremely busy on screen. In 2018 alone, Stenberg starred in several films, including The Darkest Minds, Where Hands Touch, and The Hate U Give, which earned the young actor an NAACP Image Award for Outstanding Actress in a Motion Picture last March. She was also in a little film created by Beyoncé called "Lemonade" — you might've heard of it. Oh, and on set, Queen Bey walked up to Stenberg and said she hoped Blue Ivy would grow up to be just like her. Casual.

Stenberg has also recently made headlines for coming out as gay in an interview for Wonderland magazine, conducted by her then girlfriend King Princess (who also happened to be a performer at this year's Coachella festival). And when Stenberg is not busy doing all of that, you can find her toying with her violin, an instrument she's been playing since she was a kid. According to a recent interview with Vanity Fair, Stenberg implied that music might be an industry she could potentially get into.

Accolades and accomplishments aside, Stenberg appears to be as "normal" and laid-back as you'd expect a 20-year-old to be. She took a brief pause from the Levi's Party to fill Bustle in on how she likes her coffee, what she thinks about female film directors, and what her next movie project is going to be (using emojis).