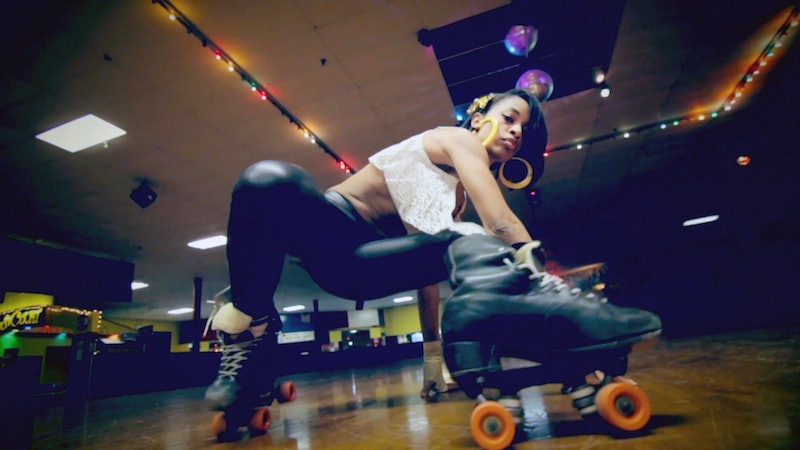 When was the last time you thought about rollerskating? Do you remember attending a birthday party at a rink as a child? Or maybe going to a nostalgia-fueled event as an adult? For some, rollerskating isn't a fleeting memory, but a crucial form of community-building, self-care, and pride that not many people on the outside know about. The new HBO documentary film United Skates, from directors Tina Brown and Dyana Winkler, will share the world of African-American rollerskating with a much larger audience when it premieres on Feb. 18.

In United Skates, rollerskating is a microcosm of the black experience. There's the lighter, joyful side of it: Rinks are shown as an incubator for hip hop artists like Salt-N-Pepa and Coolio, who are interviewed in the film. We also get introduced to each region of the country's unique skate-dancing style, from L.A. to Chicago to Ohio to New York. But there's a darker side, as well: The arbitrary rules listed on skating rink doors that recall Jim Crow laws, and the way that rink after rink has closed down rapidly since the 1980s, some due to gentrification, resulting in the loss of a safe space for black people to gather. The analogy of this underground world of skaters to the history of being black in America is surprisingly strong, and it's why Brown and Winkler decided to make their documentary.

"When we realized that it was so much more than just skating, that's when we fell in love," says Winkler, speaking over the phone ahead of the film's release. "Otherwise it's just an entertaining music video."

Neither Winkler nor Brown are skaters, nor are they black. (Winkler is American and from Hawaii, Brown is Australian.) This made them hesitant to take on the project at all. Brown explains that they sat down with the black skaters they'd met to broach the topic.

"We said this is something very special and we hope that someone from the community tells it. And it was the skaters that said, no we want that to be you ... Finally we said, 'OK we will work with you, but it has to be a film that's made with you, by you, for you.'"

The first-time filmmakers' journey toward making United Skates began when they were documenting the Central Park Skaters in New York City. "They were kind of an older group of skaters and they skate outdoors, and we followed them for a little bit," Brown explains. "And from there we met two African-American skaters, who basically told us where the huge community of skaters were ... We didn't set out to find it. It found us."

The two skaters said Brown and Winkler should follow them to an event in Virginia, which they did because, as Winkler says, "that's what a good documentary filmmaker does." When the women got there, they were shocked to find thousands of attendees from all over the country. "They had brought in their own DJs, everyone was dressed to kill, there was music pumping out the doors. And we just walked into a steam, and we just thought, 'Where are we? How do people know to show up at this random rink in Richmond, Virginia in the middle of the night?'" says Winkler. "We just started asking a whole bunch of questions."

It was at that event that they met Reggie Brown, one of the film's primary subjects. "He wasn't initially someone we were filming," Brown explains. "He just really wanted to make sure we were speaking to the right people and we were connecting with the right skaters." This was also the case with Phelicia Wright, who became their subject representing the West Coast.

Aside from letting members of the skating community lead the way, Winkler and Brown were sure to constantly question themselves to keep things in perspective.

"I think the way to be a responsible filmmaker is to continually ask yourself everyday of making the film, am I telling the right story? Am I telling the story that they're asking us to make?" Winkler says. "When you stop checking in with yourself and you just start running with what you think is cool, I think that's when problems arise."

It was also key that the directors have black consulting and executive producers. "We would check in with them in terms of the direction we were taking with the story and the scenes that we had on screen and just to make sure how we were representing African-Americans was accurate, was respectful," Brown explains. "There were some things that we thought were fine, and then there was so much underlying information that we didn't even know about that, thankfully, our team was able to shed some light on."

Both Brown and Winkler acknowledge that their privilege as non-black women allowed them to film scenes that they otherwise might not have been able to. "[The skaters] would tell us about these rinks that had kicked them out, or were mistreating them, or had put signs up that were discriminatory," Winkler says, "and we would go and they would not treat us in that same way. And so we were able to use that unfortunate privilege to get [rink owners and employees] to admit to things on camera, to film stuff that otherwise wouldn't be filmed."

While the film ends on a somewhat hopeful note — including the reopening of Wright's home rink in L.A., World on Wheels — the directors point out that rinks are still closing down all over the country. That said, Brown, Winkler, and the skaters they worked with are optimistic that United Skates can help.

"We had a very profound conversation with the skaters before making this film about what it would mean for the community if we made it and if it did well," Brown explains. "Up until this film, it's stayed fairly underground. It's not been commercialized, it's not been in the mainstream." The skaters decided that since the community has such a high risk of disappearing, it was worth it. "They were willing to share this secret, this magic with the larger world in order to save it," Brown says. "And so our hope is that that is what can happen."