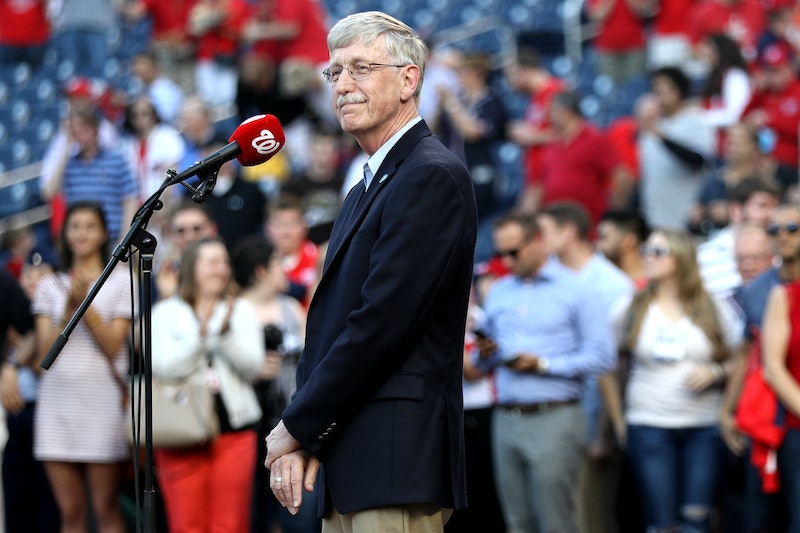 For women in STEM — science, technology, engineering and mathematics — there are challenges in every area, from getting tenure at academic institutions to facing bias when it comes to publishing results. One area in which STEM gender inequality shows up often? All-male speaking panels at conferences. These panels are where STEM experts are invited to show off their knowledge, discuss important topics publicly, and debut new work — and the fact that they're often all-male is a huge issue for female representation. The National Institute of Health's director, Francis S. Collins M.D. Ph.D., has had enough, and has just released a statement against 'manels' — and declared that going forward, he will not speak on panels that only feature men.

His statement is both an announcement of intent and a challenge to others. "I want to send a clear message of concern: it is time to end the tradition in science of all-male speaking panels, sometimes wryly referred to as “manels,"" it says. "Starting now, when I consider speaking invitations, I will expect a level playing field, where scientists of all backgrounds are evaluated fairly for speaking opportunities. If that attention to inclusiveness is not evident in the agenda, I will decline to take part. I challenge other scientific leaders across the biomedical enterprise to do the same."

Manels are an issue across STEM disciplines, experts say. "In all fields, but particularly the STEM fields, women have gotten short shrift when it comes to equal recognition for their work and representation at high-profile meetings and conferences," Lauren Segal, Senior Vice President of Communications and External Affairs at the American Association of University Women, tells Bustle. "And these are among the barriers that keep women out of leadership roles — and make them feel unwelcome in a male-dominated environment." Visibility matters — and all-male panels shouldn't be seen as normal.

Social media has known about the pervasive issue of manels for a while; a sarcastic Congrats, You Have An All-Male Panel! sticker actually exists, and women have been calling out manels in the press for years. Organizations including Women Also Know Stuff and 500 Women Scientists work to create more visible diversity at conferences by providing databases of female experts on every STEM discipline. There's no longer any excuse for conference organizers and panel-runners to say they just "couldn't find female experts" in the relevant area to join their event.

However, it's clear that the problem persists, and that more needs to be done, especially by leaders in the community. Collins' move is part of a wider trend towards boycotting male-dominated panels; in 2018, top Spanish academics announced their own boycott in an attempt to create more gender equality in Spanish academia.

Dr. Evi Abada M.D., children's health researcher and member of the leadership board at 500 Women Scientists, tells Bustle that Collins' move isn't just symbolic: "The scientific community is better served when a diversity of voices are brought to the decision making table, as well as addressing policy issues. This move by a prominent leader in the field in addressing gender disparity, especially with regards to panel discussions is not only laudable, but certainly the next best step in the right direction."

If women in STEM lose out on these opportunities, not only do they fail to reap the career rewards of prominent panel positions — which are very important for many STEM jobs — but their research and perspectives also get sidelined. This is an issue for everybody, because snubbing women's contributions to big areas of STEM research deprives us all of their benefits. It's also a problem for women in particular, because female scientists have spearheaded initiatives for gender-blind research and studies that involve women's health — and their absence from public forums means those breakthroughs don't get heard, or funded.

Experts are hopeful that Collins' move will spearhead a bigger change, in biomedical conferences and across STEM. "For far too long, women’s voices have been shut out," Segal says. "Making sure they are included is not only good for women, but good for everyone. Society benefits from hearing a full range of insights and opinions — and women have a great deal to offer." Here's hoping that this new public shaming of manels makes a real difference in the future.