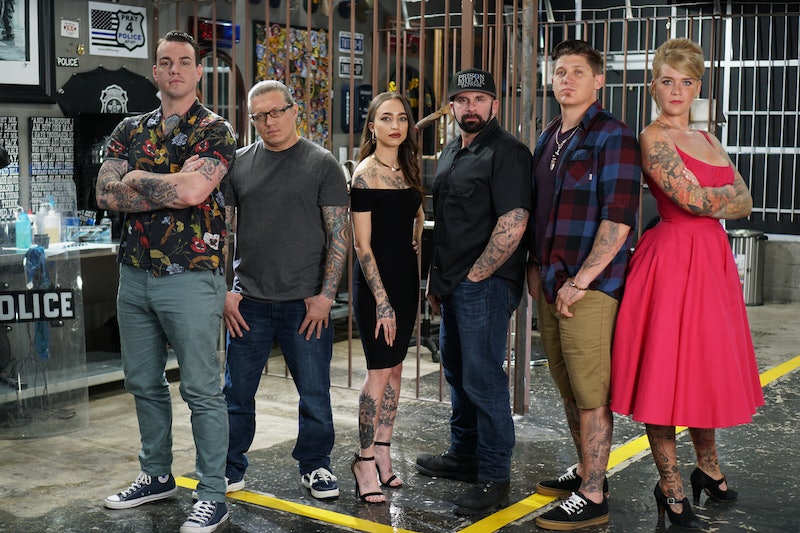 An establishment run by first responders, for first responders, the tattoo shop in Hero Ink, A&E's new unscripted series, is a special place for retired and active police officers, fire fighters, military members, and more to bond over their service and the art of tattooing. According to the network, it's located in Houston, Texas, and each of the show's 30-minute episodes document the stories of first responders who visit the shop for a tattoo inspired by their experiences on the job. Of course, anyone can visit for the shop, but it tends to draw a continuous crowd of front line men and women because most of the artists are veterans themselves.

Per The Houston Chronicle, the shop is located in the Rice Military neighborhood of Houston and is owned by 25-year Houston Police Department veteran BK Klev, who helps match clients and artists based on their histories in the field. Most of the tattoos created on the show pay tribute to inspiring — and sometimes heartbreaking experiences — customers have had on the job.

One Prison Break artist featured on the show is still an active firefighter. Robbie Carson is 29 years old and splits his hours between saving lives and tattooing. "I don't sleep," he told The Chronicle. "I have such a passion for helping people and being there for someone on their worst day, which is my firefighting job. Ninety percent of my job is not that serious, as far as firefighting goes. … Then you have that 10 percent that's super intense, and that's what I love about it. … When I'm not at the fire station, the following day I'm tattooing, and I'm completely involved in the artistic world."

Carson added that the two jobs are more alike than people might realize. "Working at Prison Break is like working at a fire station," he continued. "I'm always joking around with the first responders who come in. I was also prior active duty Marine Corps, and a lot of the first responders were prior military … and we just banter and it's hilarious. It's like tattooing at the fire station. It's really awesome and unlike any of the other studios I've worked at. You have that camaraderie, that sense of family."

Other times, Carson's jobs overlap in more unfortunate ways. He said that he once had to transport a tattoo client of his to the hospital.

As you can probably imagine, most of the tattoos and shop memorabilia have a running theme of Americana and patriotism — lots of red, white, and blue, bald eagles, and liberty bells. But of course, that's not all you'll see on the show. According to the network, a service animal tattoo is featured on the inaugural season, as well as personalized memoirs to loved ones. According to CNN, owner Klev even recently gave a 6-year-old aspiring police officer who's battling cancer a tour of the shop. She showed up in her very own uniform and told him she was fighting sickness-causing "bad guys" in her lungs. Her uncle received a tattoo in her honor.

"I created this tattoo studio specifically for my brothers and sisters in blue and all first responders from across the country," Klev told CNN. "You're given the opportunity to tell a story, and not just any story, but a story that has defined you and your life and your career, to people who are part of that with you, to a fellow first responder. That's healing."