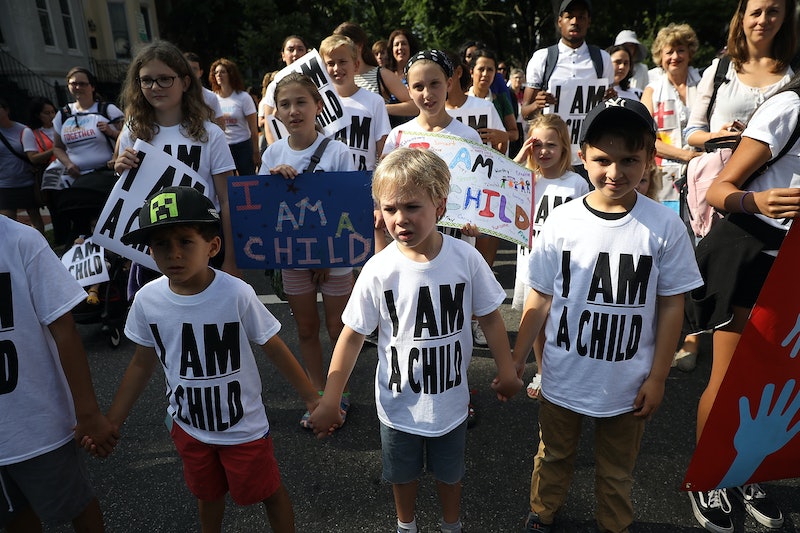 On Tuesday, a longstanding children's publication condemned how migrant children are being treated at the southern U.S. border. In a statement, Highlights for Children magazine said family separation and poor conditions in border facilities must be addressed — and that it has a moral imperative to speak out on the matter.

The magazine published its statement on Twitter on June 25, attributing it to Highlights CEO, Kent Johnson. The statement stressed that, as a publication that prioritizes children's well-being, it staunchly denounces how the U.S. government is handling migrant children who arrive at the U.S.-Mexico Border. As the statement reads:

Our company's core belief, stated each month in Highlights magazine, is that 'Children are the world’s most important people.' This is a belief about ALL children ... With this core belief in our minds and hearts, we denounce the practice of separating immigrant children from their families and urge our government to cease this activity, which is unconscionable and causes irreparable damage to young lives ...

Johnson also indicated that "this is not a political statement about immigration policy," but, rather, one "about human decency, plain and simple.”

The CEO requested that, regardless of their political views, people take action to denounce family separations at the border and demand that detained children are treated more humanely. The CEO emphasized that Americans should contact their representatives to convey these messages.

Highlights' statement comes following the recent documentation of "inhumane" conditions at U.S. border facilities, CBS News reported. As the outlet indicated on June 21, doctors and attorneys who visited a detention facility in Clint, Texas last week found that around 250 children were being housed there — and that they had insufficient access to food, water, and hygiene facilities and materials.

NPR noted that the Flores settlement, an agreement which dictates how the government should treat detained children, mandates that children detained by U.S. border patrol officials be released to the Office of Refugee Resettlement within 72 hours. However, the outlet noted that some children at the Clint detention center said that they had spent weeks there.

NPR added that over 200 children were transferred out of this facility on June 24 following reports about its condition. On Sunday, Vice President Mike Pence told Face the Nation that the "system is overwhelmed" and that Congress needs to pass a bill to help cover the costs of housing migrant children.

As for the administration's family separation policy, President Trump signed an executive order back in June 2018 outlawing the government's heavily-decried practice, CBS indicated. A U.S. district court order also banned the practice last year, NBC noted. However, according to a Los Angeles Times article published in May, the government is still separating families by taking advantage of various loopholes in the law. Separated children, including infants and very young kids, are then typically held away from their families in youth detention facilities, like the one in Clint, CBS News noted.

In an interview on NBC's Meet the Press on Sunday, President Trump agreed with host Chuck Todd that conditions in youth detention facilities are "terrible." However, he blamed President Obama and congressional Democrats for the family separation policy and the state of detention facilities.

Following the reports coming out of Texas, it's certainly clear why Highlights, a magazine which has been working on behalf of children since it was founded in 1946, is taking a stand to decry what's happening at the border. If the response on Twitter is any indication, many people are grateful that the magazine is using its platform to advocate for migrant children's rights.