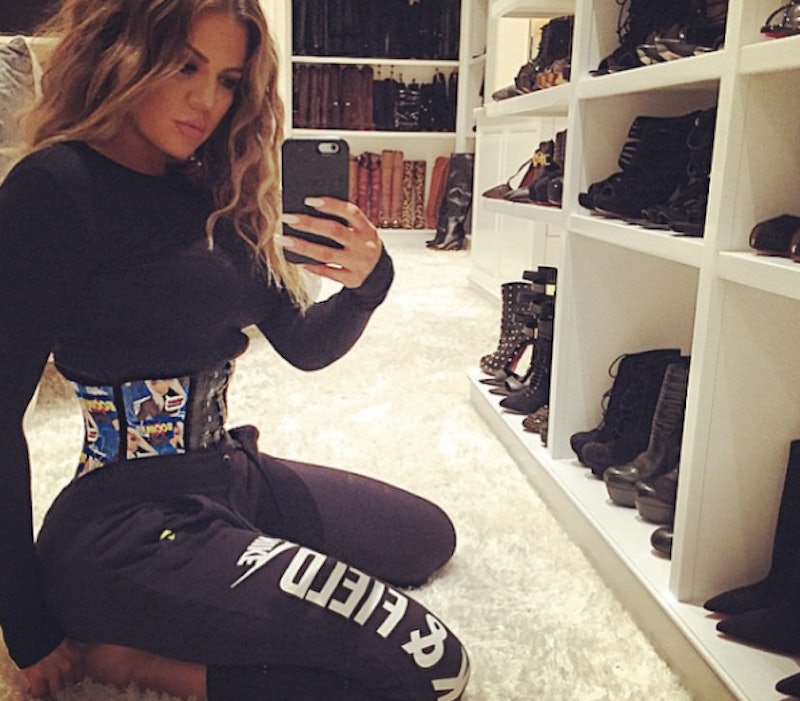 Every morning, before slipping into her work clothes, Sarah Woodyard puts on a corset. As a Milliner and Mantua-Maker at Colonial Williamsburg, wearing a historically accurate corset is part of Woodyard's job, where she spends her day educating visitors on life in the American colonies. The kind of corset she wears varies: some days, she puts on 18th century stays; on others, she'll opt for a corded corset circa 1800. Either way, the corset is an essential component to her work uniform. Though Woodyard can spend up to 18 hours encased within cotton-covered bands of metal or bone, she's not complaining: "[Wearing a corset] is like you're being gently held and hugged the entire day," Woodyard tells me.

The corset is one of the most misunderstood garments in fashion history. It's an easy target for fashion revisionists: removed from the body it once adorned, the corset's stiff structure, and it's unforgiving gridiron bone frame, looks suspiciously like a medieval torture device: crude but effective.

“It would be a terrible thing to have to wear that every day, all day. It would be like living in a cage,” says Zoe Helene, cultural activist and founder of Cosmic Sister, a women's collective promoting gender equality. “[Corsets are] absolutely about holding women back. There’s no doubt in my mind about that, and if you have a doubt, you haven’t worn one long enough,” says Helene.

But according to Woodyard, someone who does wear a corset most days, all day, corsets are actually supportive, allowing women to perform household duties without back pain. “I've found that they often are an aid to my day. And that back support really helps me not have a sore back at the end of the day. I've done eighteenth century laundry and cooking. And when you're having to pick up heavy buckets of water, or bending and moving heavy objects [the support of the corset] is really helpful," Woodyard tells me.

But weren’t corsets supposedly uncomfortable and even painful, squeezing organs into oblivion? “I don’t think that a lot of folks realize that there [were] stay makers in the 18th century that...[made women] a pair that fits [their client], and fits them well,” says Ms. Woodyard. “So I often compare the word fitted versus tight, that the stays should be fitted, but they shouldn’t be tight. And if they’re too-tight, then you need to fix them.”

Beyond fitted, tight, or anywhere in between — corsetry has a long history that stretches far beyond our current assumptions. Manipulating the body through the use of undergarments stretches back as far as antiquity, when Minoan women from the island of Crete bound their breasts with a band of soft leather, called apodesmos. But with the apodesmos, the body still performed an important role in shaping the clothes that wrapped around it. It wasn’t until the medieval era that the body was considered an object that needed to be obscured or changed. As French historian Georges Duby wrote in his book L'Europe au Moyen Age, the frills and ornamentation associated with that era "disguise the body, enveloping it in unreality, masking the attributes of men and women alike."

The origin of the word “corset” to describe a fitted female undergarment is murky. According to Dr. Joan Evans in her book Fashion in Underwear: From Babylon to Bikini Briefs, in medieval times, the word denoted some kind of cloak for, ironically, men. It wasn't until the turn of the 19th century that "corset" was used to describe the controversial undergarment (it was instead referred to as "stays"). Nonetheless, the earliest form of the corset wasn't even an undergarment. It first appears in the 1300s to describe a soft, fitted bodice that nipped in the waist and was worn over a linen shift. This basic form was used as a blueprint for shaping the Western female body with varying versions of the corset over the centuries, from the inflexibly stiff stays in the eighteenth century, to the shapewear that exists today.

“There is no natural body, but only a cultural body,” wrote Denia Bruna, the curator of the Bard Graduate Center’s exhibition, "Fashioning the Body,” in an essay for the exhibition catalogue. “The body is a reflection of the society that presided over its creation.” In other words, undergarments like the corset were used to create and mold the body, shaping and disguising the figure to form a “cultural body,” designed to fit the aesthetics of any given time.

However, during the Age of Enlightenment, intellectuals began questioning the corset and its artifice, arguing that the corset was, at best, the physical embodiment of censorship, and, at worst, a way of deforming and destroying the natural body. Anatomists and doctors began advising against the wearing of stays.

In 1768, French physician Joseph Raulin, in his manifesto, “De la conservation des enfants,” wrote, “These whalebone stays are pernicious in pregnancy.” Naturalist comte de Buffon wrote, “This uncomfortable garment—which was conceived to support the waist and prevent it from losing its shape—actually creates more discomfort and deformity than it prevents.”

But it's interesting to note that these criticisms were primarily directed at women, even though “deformity” of the body was practiced from birth with both sexes. According to an essay by Anaïs Biernat in Fashioning The Body, babies began their life swaddled to encourage warmth and the development of a straight spine. As they grew, both boys and girls wore stays as a preventative orthopedic device, to ensure proper spinal alignment. Once boys turned six, they gave up stays, while girls continued to wear them.

And women, by and large, ignored these criticisms. In fact, there is ample evidence that most women (even some of the women who were proponents of dress reform) continued to believe that wearing corsets was essential, even as men mocked them with satirical attacks such as articles and poems and illustrations lampooning the way undergarments like the corset and the bustle and the panniers created an artificial body. This pokes holes in the popular notion that women only wore corsets to play into a body type idealized by the male gaze.

“On one hand, there probably is the male gaze in the 18th century encouraging these women to dress in a certain manner to uphold respectability because there’s pressure to do that," says Woodyard. “But on the other hand, there’s this theory that women often dress for each other and that they’re competing with one another. And so, stays are the accepted garment for the period, then there might be women who are wearing them because of the larger social pressure from other women to do that.”

When people think of corsets, the image that comes to mind is often nineteenth century tightlacing. Rumors flew around that women were becoming ill and dying from the effects of lacing their corsets too tight; that women were getting surgery to remove ribs. These rumors were false. "A woman’s body is quite malleable. You can quite comfortably minimize the body without causing distress or discomfort," says Woodyard. "I think a lot of people have this misconception that you’re almost forced into one size of stays. I don’t think that a lot of folks realize that there are staymakers in the 18th century and that their specialty to work with a client, measure their client and make them a pair that fits them well."

Although tight-lacing — where women laced their corsets too-tight to create a tiny waist — had come into fashion during a brief period during the Victorian era, it was not widely practiced. But the fact that it was practiced at all inspired satirical newspaper items and cartoons (by men, of course) lampooning (and exaggerating) the lengths women would go to slavishly follow the whims of fashion. It also helped perpetuate the idea that corsets were somehow “unnatural” and “oppressive,” ideas that led the way to the next evolution of corsets known as the “girdle.”

By the turn of the 20th century, these negative attitudes towards the corset came to a head. This paved the way for designers like Paul Poiret and, later, Coco Chanel to emerge and loudly proclaim that they had killed the corset, subsequently “freeing” women from the oppressive garment. But this "victory" was hollow at best: women merely traded in their corsets for the girdle, which while less confining, still shaped the body to fit a specific body ideal.

As the decades wore on, girdles had adjusted to fit the boyish figure of the 1920s, the sinuous curves of the 1930s, the sharp lines of the 1940s and the womanly hourglass of 1950s. However, by the time second-wave feminism took hold in the late 60s, the girdle began going out of favor. By the 1980s, diet, exercise and plastic surgery took its place, manipulating the body into the perfect athletic form.

It wasn’t until the early 2000s, with the introduction of Spanx, that a new form of corsetry had again become widely used to create an illusion of an idealized body under clothes. Today, women continue to try an manipulate their bodies, with Kardashians and Instagram stars alike peddling waist trainers — a corset-like device that holds the promise of shrinking the waist down for a perfect hourglass figure.

It's easy to fetishcize the corset and it's subsequent evolutions when extreme versions of the garment dominate our understanding of corsets. When our understanding of historical dress is rooted in books or museum exhibitions, where it is removed from the human beings who wore them, the corset can look like an abstract torture device. But, like all clothes, it was lived-in, and as such, it was not a static image of conformity; rather, it was a garment that was meant to fit the person wearing it – the person who chose to wear it.