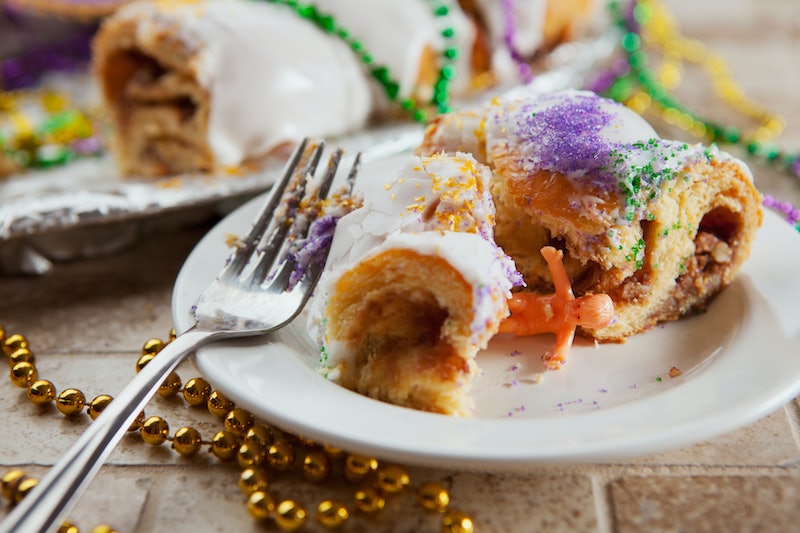 In the early weeks of the New Year, delectable ring-shaped pastries covered in purple, green, and gold sprinkles known as king cakes begin to appear in bakeries across New Orleans. But while these celebratory desserts are an important part of contemporary Mardi Gras celebrations, the history of king cake actually dates back hundreds of years. Traditionally, king cake is baked and served during the Catholic celebration of Epiphany, which falls twelve nights after Christmas on Jan. 6; the feast day of Epiphany, which is also known as Three Kings’ Day, marks the visit of the Magi and the end of the Christmas season. But while many forms of this pastry are used as celebratory centerpieces around the world, the cakes have a special place during Carnival in New Orleans, where thousands of the cakes are eaten from Epiphany through Fat Tuesday.

The king cake tradition dates back to Old World Europe. In France and Spain, a cake wreath symbolic of a crown, originally thought to have been made with a French bread-like dough or brioche topped with sugar, was eaten to mark the occasion of Three Kings' Day. It is thought that the king cake was brought to America by the French around 1870, where the custom was quickly embraced in New Orleans before spreading to parts of Mexico and Latin America.

In order to make the dessert even more festive for Mardi Gras celebrations, people eventually began baking small symbolic treasures into the cakes. According to NPR, “In the late 19th century, the Twelfth Night Revelers, a New Orleans social group that hosted the first Mardi Gras ball of the season, took up the custom of hiding a bean (later replaced by a pecan or a jeweled ring) inside the cake.” The person to find the token in their slice of cake would be king or queen of the ball, a tradition that is still honored today.

To keep up with the demand for the sweet treats, commercial bakeries in New Orleans began producing king cakes in the 1940s and 1950s. Donald Entringer, president of McKenzie’s Bakeries, was the first to bake pink plastic babies into his cakes. Entringer secured permission from the health department to bake the toy into the cake, and the babies, symbolic of infant Jesus, became a traditional part of Louisiana-style king cake. Today, many bakeries choose to leave the baby outside the cake for the host to sneak in at their discretion.

Baking toy babies into a tasty ring-shaped pastry may seem like a wacky prank, but for the people of New Orleans, that trinket is all part of the celebration. The finder of the baby must host the next party and supply the king cake.

One thing's for sure: The tradition is a tasty part of Carnival that anyone can enjoy. You can even make the colorful cake yourself at home. Just be sure to wear a costume and about 20 strands of beads when you dig in!