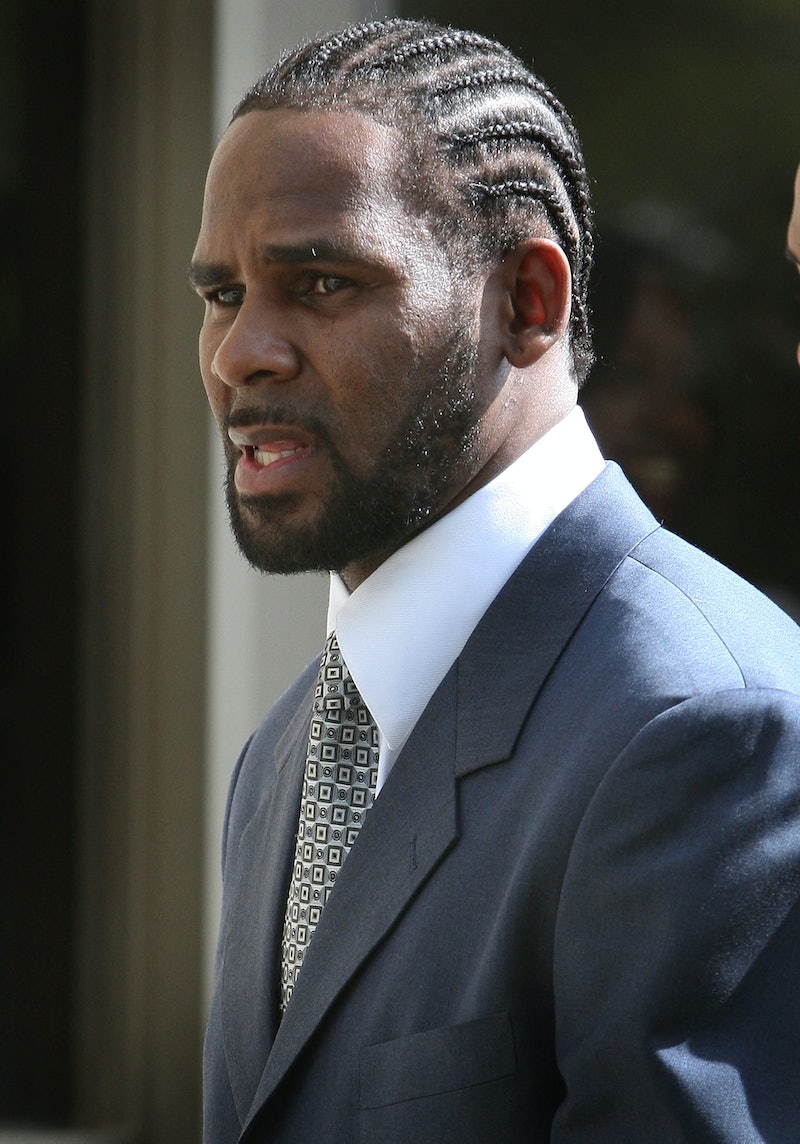 BuzzFeed News published a report on Monday outlining new allegations accusing R&B singer R. Kelly of running a "cult" and trapping women against their will, demanding sexual favors, and controlling every aspect of their lives. According to the report, the singer allegedly lures young women with musical aspirations by promising to help their music careers. As most familiar with Kelly's name know, this is far from the first instance in which the singer has been accused of sexual or violent abuse against female victims — frequently underage girls. Kelly has denied several of the allegations and been acquitted of others.

We can only wonder why folks would persist in defaming a great artist who loves his fans, works 24/7, and takes care of all of the people in his life. He works hard to become the best person and artist he can be. It is interesting that stories and tales debunked many years ago turn up when his goal is to stop the violence; put down the guns; and embrace peace and love. I suppose that is the price of fame. Like all of us, Mr. Kelly deserves a personal life. Please respect that.

Here's a rundown of the previous allegations made against Kelly.

After meeting the late singer Aaliyah in 1991 when she was 12, Kelly married her when she was 15 in August 31, 1994, in Illinois. Although the state's age of consent was 17, the marriage certificate falsely listed Aaliyah's age as 18; Kelly was 27.

According to a memoir by Demetrius Smith, who worked for Kelly for various years, he and the singer procured two fake IDs for Aaliyah in Illinois — one from the Public Aid office and one from Federal Express — for the purpose of marrying the teenager, who believed she was pregnant. Kelly reportedly decided to marry the young singer after receiving faulty advice informing him that he would face no legal repercussions for the relationship if they were married.

The marriage was annulled in Detroit six months later after Aaliyah's parents learned of the situation, with both singers signing a legal agreement not to discuss the matter. In a 2016 interview with GQ, Kelly responded to the question of whether he felt he did anything wrong by marrying Aaliyah by saying, “Absolutely not. Absolutely not. That's my answer forever: Absolutely not.”

A woman named Tiffany Hawkins filed a lawsuit alleging that in 1991, at the age of 15, she began having sexual relations with the singer. A friend of Hawkins testified as a witness in the case and also accused Kelly of having groped and engaging in sexual intercourse with her when she was 14 and the singer was 24. He filed a suit against her as well, claiming she demanded money and a recording contract with him or else she would "publicize the false allegations" that Kelly was the father of her child.

Hawkins never made any sort of paternity claim. Kelly's charges against her were dismissed. He reportedly settled with Hawkins for $250,000 in 1998.

Tracy Sampson accused Kelly of coercing her into sexual activities while she was a 17-year-old intern at Epic Records. Although he insisted he was innocent, Kelly settled with Sampson out of court for $50,000.

After receiving a video that allegedly showed Kelly having sex with a young girl, which would be statutory rape, the newspaper forwarded the video to the police. The singer Sparkle, with whom Kelly made the 1998 song "Be Careful," identified the girl depicted in the video as her niece. Kelly maintained that he was innocent, claiming that the video was fake. "It's crap, and that's how we're going to treat it," he said at the time.

Patrice Jones sued Kelly for allegedly initiating a sexual relationship that spanned nine months, beginning in 1998 when she was 16. The lawsuit accused Kelly of having used his fame and power to entice Jones by feeding her promises to teach her about the music industry and involve her in music videos. After getting pregnant in 1999, Jones claims Kelly coerced her into getting an abortion. Kelly and his lawyer denied that the singer ever had any sexual contact with Jones.

A second video of Kelly and the girl in the first video is sent to the newspaper. The girl was eventually identified as the singer's goddaughter. Kelly was arrested on 21 counts of child pornography, though it was later reduced to 14. He was eventually acquitted on all charges.

In 2002, 33-year-old Montina Woods alleged that she was unknowingly recorded having a sexual encounter with the singer in a studio. Kelly's team called the lawsuit "ridiculous" and insisted it was a case of "people just piling on." Kelly ultimately settled with Woods for an undisclosed amount.

Kelly was again arrested after officials found 12 photos depicting a naked female minor, three of which displayed Kelly engaging in sexual activity with the girl.

Kelly's spokesman, Allan Mayer, said the arrest was "a classic case of piling on, in which a local jurisdiction tries to make headlines by attaching itself to a celebrity case. As far as we can tell, the charges all relate to R. Kelly's arrest last summer. In other words, there is nothing new here."

Andrea Kelly sought a restraining order against Kelly, accusing the singer of domestic violence throughout their relationship. "My wife and I had a heated argument, and we are now in the process of working it out," Kelly said.

Although she rescinded the order weeks later in an attempt to work out her problems with Kelly, the couple ultimately divorced in 2009.

Having heard rumors that his famous brother's legal team might suggest that he was the man in the sex tape, Carey Kelly publicly accused his brother of attempting to bribe him with $50,000 to testify that the singer was not the person shown in the video.

"My brother wanted me to do some sh*t pertaining to this case that would leave me behind bars with a record deal," he said. "It doesn't make sense, so I turned it down. Since I couldn't lie for him in a court of law, we're back to beefing again, and we ain't brothers no more."

A R. Kelly spokesperson said, "This is not the first time Carey has made ridiculous accusations against his brother. We're not going to dignify them with a comment."

2008 — Kelly Is Accused Of Having Had Threesomes With Underage Girls

Lisa Van Allen testified in court claiming to have engaged in threesomes with R. Kelly and the 14-year-old girl shown in the sex tape highlighted at the trial. Van Allen claims the encounters took place in 1998, when she was 17 and 18. Van Allen received immunity in exchange for her testimony. R. Kelly's team denied the claim, saying Van Allen was a liar who just wanted money.

In an interview with the radio stations KJLH, George Daniels, the husband of Kelly's former publicist Regina Daniels, accused the singer of having maintained a "secret" and "inappropriate" relationship with his daughter, who at the time of the interview was 21.

The child pornography charges stemming from the video of the 14-year-old girl came to an end six years after his arrest. While jurors claimed to have felt sure that the man on the sex tape was Kelly, uncertainty about the girl's identity led them to a not guilty verdict.

According to BuzzFeed's report, six women are currently living in homes owned by Kelly in the suburbs of Chicago and Atlanta under the singer's rigid control. Kelly has yet to respond to Bustle's request for comment on the latest allegations against him.

More like this
Kelly Rowland Defends Chris Brown At The 2022 AMAs After Crowd Boos His Win
By Jake Viswanath
Mollie King & Stuart Broad Just Shared The First Pic Of Their Baby
By Sophie McEvoy
MOBO Awards Found Kanya King On The Woman Whose Grit & Determination Spur Her On
By Kanya King
The Indigo Girls Taught Me Queer Relationships Could Be Messy, Too
By Hannah Soyer
Get Even More From Bustle — Sign Up For The Newsletter