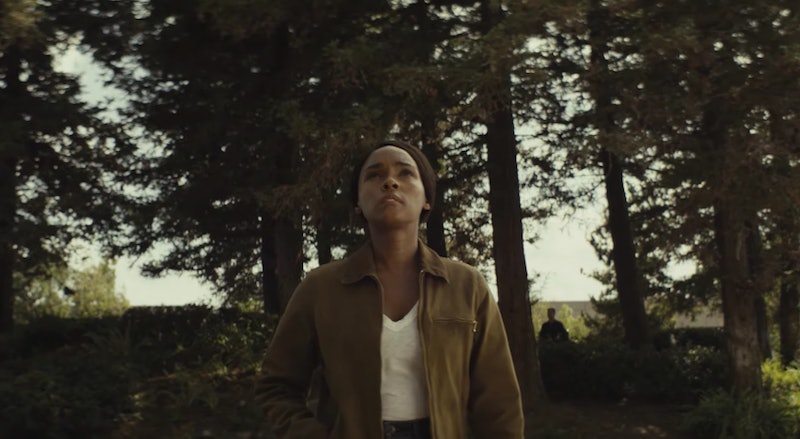 Ever wonder what it would be like to wake up and not remember who you are or how you got there? That's the struggle Janelle Monáe faces in the Homecoming Season 2 teaser. Stepping in for Julia Roberts as the lead in the Amazon Prime series, Monáe takes on the role of Jackie, who, in the teaser, finds herself on a rowboat out in the middle of nowhere with, seemingly, no idea how she got there.

This prompts her to embark on a quest to find her true identity, but in order to do so, she must immerse herself into the world of the Homecoming Initiative and its parent company Geist Group, which could put her in more danger than ever before. "You need to do what you think is right, but you must protect yourself, because nobody else will," Monáe's character in heard saying in a voiceover while the camera cuts to brief flashes of returning characters, such as Walter (Stephan James) and Audrey (Hong Chau), along with newcomers Geist CEO Leonard Geist (Chris Cooper) and Joan Cusack, set to play an unnamed member of the military. But which of them will prove to be friend or foe to Jackie? That's one of many lingering mysteries the teaser leaves up in the air.

"It's doing something that is unique in the television space," Monáe told Entertainment Weekly about the show's second season, which is set to debut on Friday, May 22, on Amazon Prime Video. "When I read these episodes, I was like, 'Oh wow, this is still going to have a very special quality and take everyone in an unexpected place.'"

And if you're wondering how the sophomore season will compare to its freshman predecessor, Monáe promised plenty of tense moments that will leave viewers on the edge of their seats. "It's even more elevated this season — and even more suspenseful," she added. "Nothing is what it appears to be."

Fans can also expect to see a new side of Walter, who will have a much more take-charge attitude moving forward. "We're seeing a dogged, more determined Walter," James told EW about his character during the same interview. "His time away from the facility left a lot of room for thinking about what it is he's gone through. And it's interesting to see how [he and Jackie] use each other, need each other, and bring something out in each other."

Let's just hope this potential team-up will give Jackie the answers she's so desperately looking for.