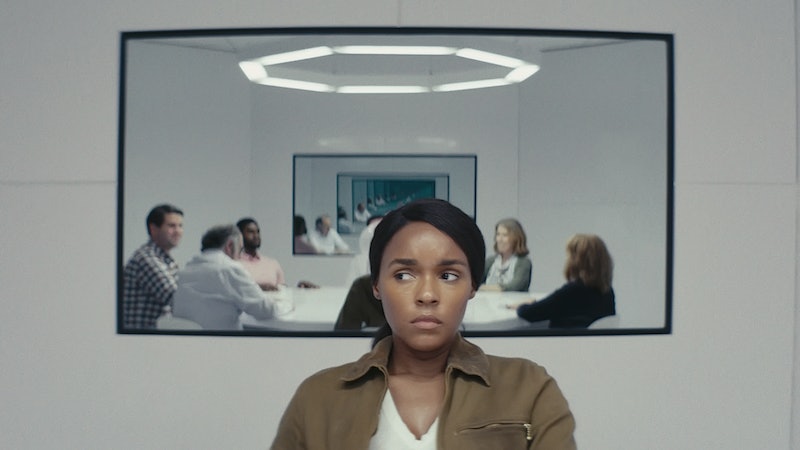 Janelle Monaé: singer, songwriter, actor, and... investigator solving a govenment conspiracy? Her newest role on one of Amazon Prime's breakout shows finds her to try solving a mystery that's left her completely in the dark. Amazon’s Homecoming Season 2 trailer teases that Monaé's protagonist will dive deeper into the Homecoming conspiracy than anyone else, and it might be to her peril.

Monaé’s character wakes up in a rowboat drifting along a lake, without any memory of how she got there or who she even is — including her name. Her search leads her to the Geist Group, the so-called “wellness center" behind the Homecoming Initiative that Julia Roberts’ character Heidi got sucked into during Season 1. Although the star of the show may be new, the story picks up where last season left off, right in the middle of a huge conspiracy.

Stephan James will return as Walter Cruz, who seems to uncover a new piece of the twisted Geist Group puzzle as he tries to heal from his traumatic experience in the Initiative. Like Cruz, Monaé’s character seems to also be a military vet, suggesting she might have been a part of the Homecoming Initiative, or a similar experiment. Joining the cast this season are Chris Cooper as Leonard Geist, the company’s eccentric founder, and Joan Cusack as Francine Bunda, described as “an equally eccentric military woman.”

Monaé previously gave fans a look at the upcoming season in an interview with Entertainment Weekly, calling it “more elevated” and “suspenseful” than the first one. “It’s doing something that is unique in the television space,” she said. “When I read these episodes, I was like, ‘Oh wow, this is still going to have a very special quality and take everyone in an unexpected place.’ Nothing is what it appears to be.”

And for those who are worried about Monaé living up to Roberts’ critically acclaimed work in the series, she assured fans that “there's no replacing Queen Julia,” adding that one of her favorite moments on set was a surprise visit from the Oscar-winning actor. "After we finished shooting a scene I heard this loud scream, and come to find out it was her," she recalled to EW. “For her to respond with excitement, literally, and to meet and hug each other, that was enough to relax me.”

Homecoming Season 2 starts streaming on Amazon Prime Video on Friday, May 22, so there's more than enough time to catch up on Roberts' mystery in the first season.

More like this
'Paper Girls' Season 2 Could Introduce Even More New Characters & Threats
By Brad Witter
'The Sandman’s Ending Is A Departure From Neil Gaiman’s Comic Book Series
By Kadin Burnett
The 'PLL: Original Sin' Creators Say A’s Identity Will Be “Very Clear” By The Season Finale
By Alyssa Lapid
Everything To Know About 'RHOC' Season 17
By Brad Witter and Sophia Moore
Get Even More From Bustle — Sign Up For The Newsletter