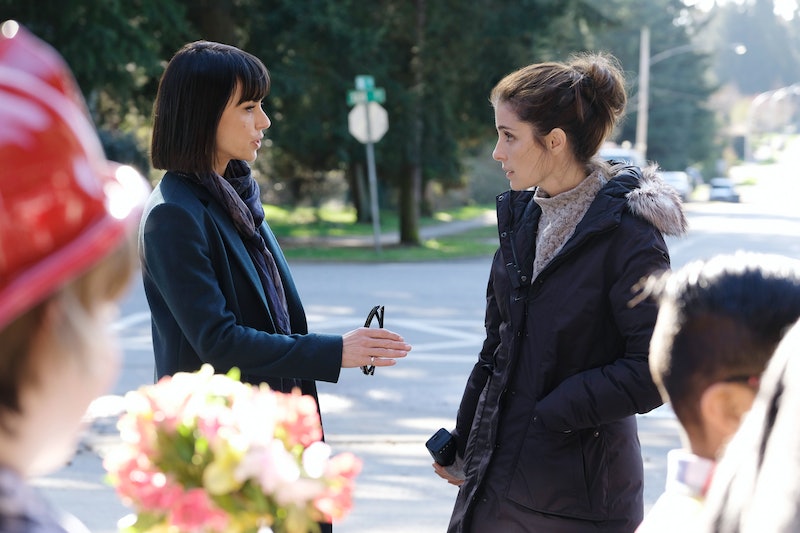 Spoilers ahead for the "Projection" episode of UnREAL. The producers of Everlasting don’t think too much in terms of humanity, or at least, they don’t think much about hurting people. Screaming, outbursts, and ambulance rides make for good television, after all. But in the April 9 episode of UnREAL, viewers get a firsthand look at how those fun, lighthearted hometown dates on Everlasting have much more collateral damage than anyone involved realizes.

After going around with August and Jasper, Serena opts to let Owen take her home to Colorado for a hometown date — she’ll get to meet his family and, most importantly, his young daughter. Serena doesn’t know if she’s really ready for mommy duty, but she likes Owen, so why not give it a shot? It's known that Owen’s daughter is deathly scared of clowns, which seems like a normal fear for a third grader. What’s not normal is that Quinn, scared that Rachel is growing a heart and won’t deliver on what Quinn considers “good” television, hires a clown to come to Owen’s homecoming party, promptly scaring the girl enough to wet herself and run, flailing, across the road, just in the path of an oncoming tractor trailer. The crowd flinches, and then, luckily, Serena, suddenly gaining the speed of Usain Bolt, runs across the road and snatches the girl from becoming roadkill.

Serena is a hero, and everyone on set lets out a sigh of relief. And then, everyone’s eyes move to Quinn, because she set up the whole fiasco that almost killed a cast member’s daughter. Quinn’s reaction is, “Yeah, but no one got hurt, so who cares?” It’s in this moment that Quinn draws a hard line in the sand between herself and the other producers of Everlasting. Chet tells Quinn that she could never say a thing like that if she was a parent (she can’t have children, so this especially stings), and Rachel tells Quinn that Owen’s daughter will have to live with that trauma — and the embarrassment of being so scared she soiled herself on national television — for the rest of her life. Quinn shrugs, and to her, life goes on.

Back on set, Jay finally comes down from his cocaine high and realizes that his dalliances with Alexi have a serious victim — himself. Jay says to himself, “What are you doing?” and he knows that he also has to make a change, whether he has to give up his new show, World Of Dance, or now.

Slowly, Chet, Rachel, and Jay are starting to learn that the things they do on set have consequences to real people living in the real world. Last season, Rachel orchestrated a car crash that killed two people. Chet, who is desperately seeking custody of his son, just almost saw another person’s child taken away from him in a ploy for television ratings. Jay lost his boyfriend and control of his life just because he got a new television show. This trio is seeing that being omniscient in the Everlasting universe has its perks, but you know, living a more just and moral life is better. Everlasting doesn’t tuck you in at night.

But in Quinn’s case, it will have to, because she has driven away every man that wanted to be with her because she is afraid of admitting that she can’t have kids. She is afraid of being rejected, so she rejects first. She doesn’t open herself up anymore, and that’s made her tired, sad, and callous — so callous that she can’t even feel scared when she almost kills a kid on her own show.

So, what happens next? The tighter Quinn holds onto her show, the tougher it will be to fight her, and yet, the other producers must. They have to. Even Chet, in his quest for an Emmy Award, sees that all of this Everlasting fame and acclaim isn’t worth selling your soul for. And if Chet sees something that you don’t in terms of morality, that’s a problem. The other producers on UnREAL are getting a real awakening, and Quinn will miss the boat — or worse — if she doesn’t join them.