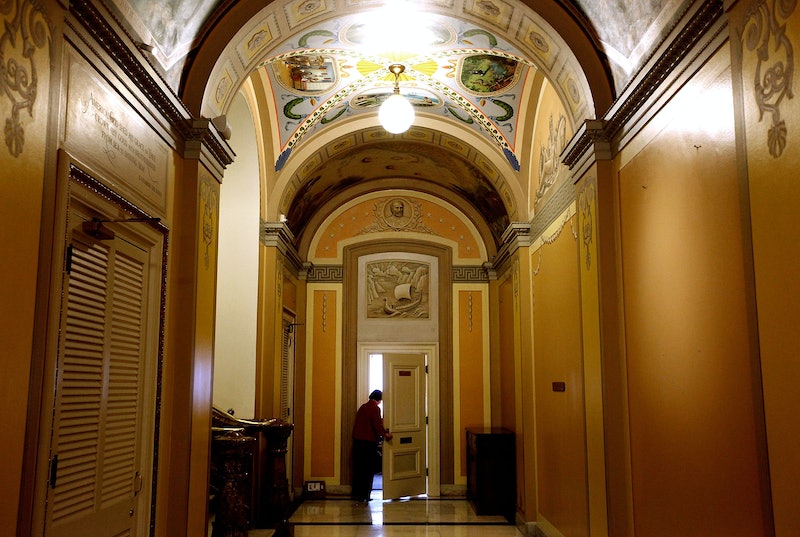 An unfortunate reality of electoral politics, from city councils to the federal legislative branch, is that many decisions that shape the lives of citizens take place behind closed doors. Just before the convening of the 115th Congress, House GOP members took a secret vote to gut an independent ethical oversight panel, proving once again that important decisions can too easily fly under the radar. The House GOP's Office of Congressional Ethics vote and the fallout from it mirrors the last-minute "emergency session" that convened in North Carolina last year — an intentionally secretive measure that resulted in the wildly-controversial passage of HB2, the state's scandalous anti-transgender "bathroom bill."

In both the OCE vote and the passage of HB2, the last-minute, no warning nature of the votes were used to great effect. In a certain light, it's a brilliant political tactic: to rapidly introduce a piece of legislation with no time for public debate. The move also forces the representatives voting on it to make a decision without having time to digest it. Beyond their scope and the size of the legislative bodies, however, the biggest difference between the two bills is that word of the OCE vote broke before it reached the floor of the House. This gives representatives some time to think it over before it's scheduled for a full floor vote on Jan. 3.

Despite the embarrassment heaped upon their N.C. counterparts last year, House GOP members either didn't believe that the media would catch on to their secret meeting, or, more likely, have enough confidence in the Republican-controlled nature of the current House to not worry about such things. It's hard to determine which prospect is worse, but House Minority Leader Nancy Pelosi seems to believe there's little likelihood it won't pass when set to a floor vote.

The last-minute secret session maneuver is as vile as they come in politics, in my opinion, and the fact that they're relatively common makes it all the more disgusting. Whether Republican, Democrat, or independent, we elect our representatives to act in our interests, and actions such as gutting the OCE and the passage of HB2 (which, beyond the anti-trans bathroom portion, also bars N.C. cities from setting minimum wages and makes discrimination lawsuits almost impossible) go against that ideal. It's unclear if House Republicans are merely reveling in their victory lap or are protecting themselves from the supposed "swamp draining" that Donald Trump promised on the campaign trail, but either way, they might have gotten away with it before anyone knew what happened.