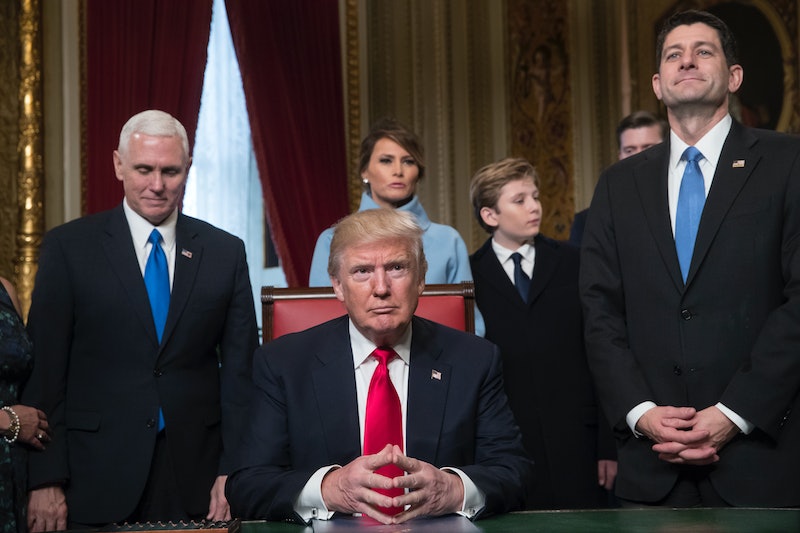 The House of Representatives just passed HR-7, an anti-abortion bill that expands the Hyde Amendment (a 1976 bill which prohibits the use of federal funds for abortions) to exclude the use of insurance for abortion coverage. The bill is titled "No Taxpayer Funding for Abortion and Abortion Insurance Full Disclosure Act of 2017," and this language is misleading, given that no federal funding has gone to abortion coverage in over 40 years. Instead, the bill will expand Hyde Amendment provisions to make them permanent, and will in effect bar tax funding to insurers who provide abortion.

According to the Center for Reproductive Rights, this amendment will be particularly hard on women who won't be able to pay full price for an abortion — members of low-income families, millennial women, and women of color in particular.

HR-7 was passed in spite of the fact that there are already 10 states that don't allow insurance-covered abortions and 15 more that bar Affordable Care Act recipients from getting covered abortions.

Despite passage in the House, the bill is not yet law — it will first need to go to the Senate for a vote, and then head to president's desk to be signed into law. Unfortunately, Republicans also control the Senate. If President Donald Trump's executive order to extend the "global gag rule" and his anti-choice campaign promises are any indication, he will likely sign the bill once it reaches his desk.

The stats on exactly how much an abortion without insurance costs are murky: It usually depends on where you live and what gestation period you're at when seeking an abortion. In 2014, Clear Health Costs, a healthcare information site, found that a Los Angeles Planned Parenthood quoted costs ranging from $648 for surgical abortions up to 11 weeks and $3,275 for 22-24 weeks.

This is also factoring in that this guide was written two and a half years ago, that the quotes they got were from Planned Parenthood (which is also under attack from the 115th Congress), that these quotes were from a liberal state with fairly progressive abortion laws, and that Planned Parenthood operates on an income-based sliding scale.

There's truly no telling what an out-of-pocket, uninsured abortion will cost in 2017, but it's very unlikely that underemployed millennials and people who don't make enough to afford to drop hundreds or even thousands of dollars to terminate a pregnancy.

With this incredibly harmful bill, the GOP-controlled Congress is letting Americans know that their majority support for abortion access doesn't matter. In the few days since Trump's inauguration and the historic turnout for the women's marches around the country and world, massive rollbacks on our rights are already being pushed through. To fight it, you can call your senator now and explain your opposition. Here's how.