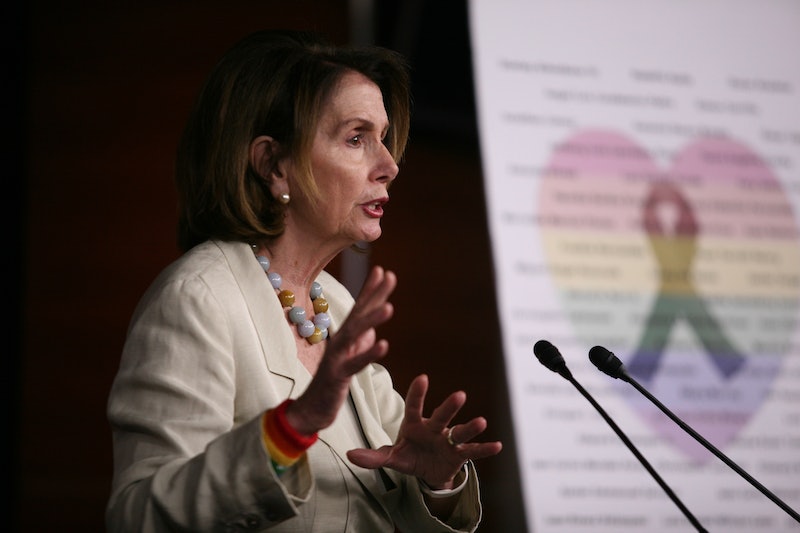 Four years after it was first introduced in Congress, House Democrats passed The Equality Act on Friday in a move to expand civil rights protections for LGBTQ people. Only eight Republicans voted in favor of the bill, BuzzFeed News reported, and The Equality Act was passed in a 236-173 vote.

First introduced in 2015, the bill would expand current protections prohibiting discrimination based on race, religion, sex, and disability to include gender identity and sexual orientation. It would not allow for exceptions in cases of moral or faith-based objection. According to BuzzFeed News, several House Republicans framed their objection to the bill as concern it would have "unintended consequences" for women and religious freedom.

"It would allow the government to force its rigid and unyielding fist inside the church," BuzzFeed News reported Republican Rep. Ross Spano said of the bill, arguing it would intrude on the rights of religious organizations and business owners. "It would deliver a crushing blow to the base of the tree of religious liberty."

Religious groups have also voiced opposition to the bill. In a statement released earlier this week, the Church of Jesus Christ of Latter-day Saints said that although it supported "reasonable measures" toward ensuring "LGBT persons fair access to important rights, such as nondiscrimination," it opposed The Equality Act. The church went on to claim the bill "does not meet the standard of fairness for all" and urged Congress to pass "legislation that vigorously protects religious freedom while also protecting basic civil rights for LGBT persons."

Democrats and civil rights activists, however, have hailed the legislation as common sense civil rights. What's more, House Speaker Nancy Pelosi has argued the bill would move the country "closer to equal liberty and justice for all," The Washington Post has reported.

"For too long, conversations surrounding America's LGBTQ community have focused on 'tolerance,'" Pelosi said in a statement tweeted ahead of the House vote Friday. "But tolerance is a condescending word. As we pass the #EqualityAct today, we take pride in this community and all they have & will achieve."

"This is not about tolerance," Pelosi had said in a speech given on the House floor. "This is about respect of our LGBTQ community. This is about taking pride."

But given the Republican Party's widespread objection to The Equality Act, it's unclear if the bill will ever become law. According to The Washington Post, it faces "long odds" in the Senate, where Republicans hold the majority.

Within hours of the bill's passage in the House on Friday, some Senate Democrats had already urged Senate Majority Leader Mitch McConnell to bring the bill up for a vote. "The Equality Act just passed the House, sending a clear message that discrimination against LGBTQ* people won't be tolerated," Sen. Kamala Harris tweeted. "No one should ever be denied work, service, or a place to live because of who they are or who they love. I urge the GOP to bring it to the Senate floor."

Despite the obstacles likely awaiting the bill in the Senate, supporters of The Equality Act have said the vote is something to celebrate. According to Human Rights Campaign, Friday's vote in the House is "the first time a chamber of Congress approved a comprehensive LGBTQ civil rights bill."