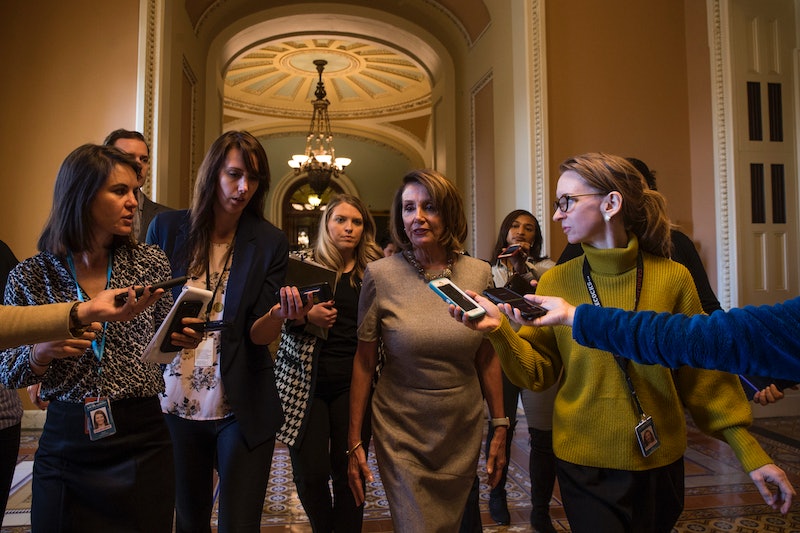 During the shutdown in December, POTUS issued an executive order that not only froze federal workers' pay, but also cancelled their upcoming annual raise for 2019. But on Wednesday, the House voted for federal worker pay raises in opposition to Trump's decision; specifically, it passed a bill that calls for a 2.6 percent cost-of-living increase for all workers. And even though this bill doesn't yet have Republican support in the Senate, there's reason to believe it might, given a specific precedent.

Per Vox, GOP senators have previously supported the idea of giving employees a 1.9 percent raise. Additionally, The Washington Post notes that although a majority of House Republicans did not vote in favor of the pay raise, 29 Republicans did, showing that the bill isn't entirely a partisan affair.

We need to make sure pay is keeping pace with the rising cost of living for those who serve this country in civilian roles, as well as those in military roles. They are no less deserving of our gratitude and fair compensation.

Rep. Gerald Connelly (D-VA), who was the author of the bill, explained to the publication that this pay raise would have extra significance in the wake of the shutdown, which left over 800,000 workers without two rounds of paychecks. “[It's] not only deserved, but it’s also symbolically important," he said.

The bill was not without controversy. Several Republicans pointed out that on Wednesday, House Democrats struck down a bill that would have blocked pay raises to any federal workers who were found guilty of sexual misconduct, or of not paying their taxes. Rep. Mark Meadows, who is the top Republican serving on the House Oversight and Government Reform Committee, said that the bill approved by the House “rewards the bad along with the good."

Per The Washington Post, Meadows said, "[This bill] says it doesn’t matter what kind of job you do, and I think that’s a terrible message to send.”

Now, in order for the bill to be passed into legislation, the Senate will have to approve it, as will POTUS, though Congress does have the option of overriding a veto by him. That would require a large contingent of Republicans to side with Democrats in favor of the pay raise, though.

In August, when Trump first announced his intent to freeze federal pay in the coming year, he cited "serious economic conditions" as the main reason for the decision in a letter to Congress, per USA Today. Trump has not publicly spoken about the pay raise debate in 2019, since he reopened the government after a partial shutdown that lasted over a month.

The federal pay raise bill is just one of many on House Democrats' list of priorities in 2019, now that they hold control of the House. Per The New York Times, Democrats also plan to introduce another bill related to pay, which will aim to close the pay gap between men and women. Whether either of these bills will make it past the Senate and the president is another story entirely.