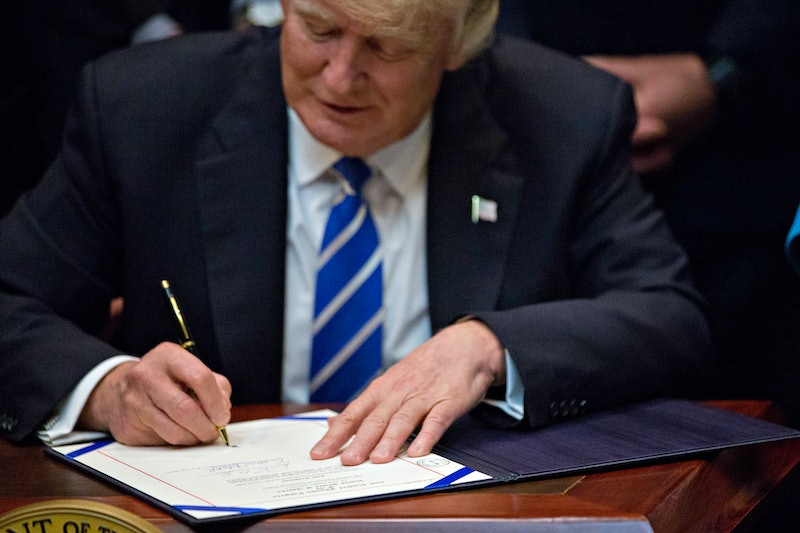 The House voted on Tuesday to repeal the sweeping online privacy protections passed by the Obama administration, and if Trump signs the bill, it will allow internet providers to collect and sell their customers' browsing history without their permission. The Washington Post reports that the measure, approved in the Senate last week, is expected to be signed by President Donald Trump, and is indicative of his administration's plans to roll back Obama-era technology policies.

The rules, established in October 2016 and scheduled to go into effect in December 2017, limited internet providers' (including companies like AT&T, Verizon, and Comcast) ability to use customer's "behavioral data," like browsing histories, mobile location data, and other data generated from internet users for profit, by requiring them to get explicit consent before they share that information and be more transparent about what kind of information they are collecting and why. So it's easy to understand why privacy advocates are concerned about losing these regulations. Per the Washington Post:

"Internet providers can collect enormous amounts of personal information because they can see all of the online activities of users as they browse different sites on the Web... And unlike search engines or streaming video sites... it is far more difficult to choose a different Internet provider."

Supporters of the repeal argued that the regulations "stifled innovation" for the companies required to adhere to the rules. Marsha Blackburn, Chair of the House Subcommittee, which oversees the Federal Communications Commission (FCC), said in a statement that the privacy rules "harm[ed] consumers by creating confusion within the Internet-ecosystem."

However, privacy advocates maintain that the vote prioritizes companies over consumers. Executive Director of the Center for Digital Democracy Jeffrey Chester told the Washington Post that "today's vote means that Americans will never be safe online from having their most personal details stealthily scrutinized and sold to the highest bidder. Donald Trump, by giving away our data to the country’s leading phone and cable giants, is further undermining American democracy.”

In addition to giving internet providers more access to their customer's data without requiring their explicit permission (which companies like Facebook and Google already do), the measure absolves providers from needing to increase protections against hackers, and prevents the FCC from restoring similar regulations in the future.

As the measure heads to the desk of the POTUS, privacy advocates and concerned internet users promise to continue to campaign against rampant data-gathering by Internet service providers.