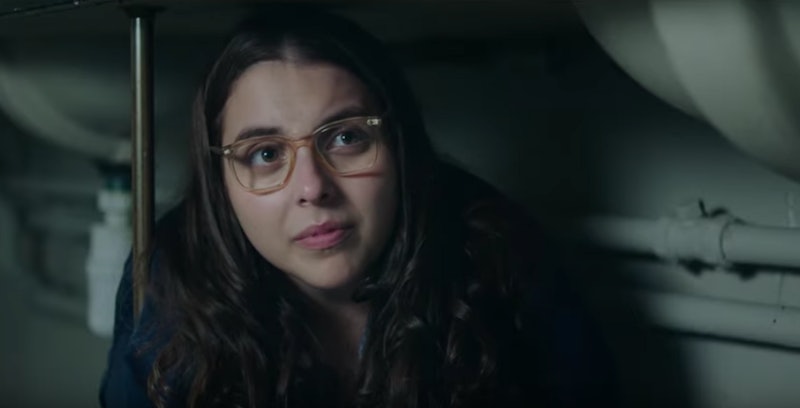 Beanie Feldstein has long played the trusty and intelligent best friend in breakout films Lady Bird and Booksmart. But in her newest role, she's taking the lead and living out everyone's teenage dream. The new How To Build A Girl trailer follows Beanie Feldstein as she transforms herself from a shy teenager into the name on everyone's lips, using everything she can get her hands on — wigs, boys, and a wardrobe that even '80s Madonna would envy.

How to Build a Girl, based on journalist Caitlin Moran's novel of the same name, stars Feldstein as Johanna Morrigan, a 16-year-old British girl who's set on using her writing skills to escape her hometown of Wolverhampton. When a London journalist declines her submissions, she takes matters into her own hands by re-inventing herself as Dolly Wilde, a sharp-tongued and fashionably fierce music critic who never minces words, even when it comes to the most popular bands — a.k.a. a publicist's worst nightmare.

Debauchery, destruction, and romance ensue as she discovers herself in the exciting but treacherous worlds of music and media. While it's sure to be another relatable coming-of-age knockout from Feldstein, it's really all about her British accent, which is truly something to behold.

In order to perfect that thick regional British accent, one specific to Wolverhampton, Feldstein actually worked at a retail shop there and forced herself to never break character, on orders from her director Coky Giedroyc. “I had to speak in an accent the whole time,” she told Entertainment Weekly in September 2019. “I was shaking like a kid on the first day of school. I was like, 'Please don’t make me go in!'" Getting the hang of the word "lovely" was key to mastering her accent. "Once I had that one word I thought, ‘Okay, maybe I can do this,'" she said.

However, the actor said that the challenging process was "worth it," as the role had changed her life in a way that she hadn't expected. “I never thought of myself as a brave person before,” she told EW. “I just didn’t associate with that. And then, after we wrapped, I thought, ‘Maybe I’m a little bit brave.'”

How To Build A Girl also features Game of Thrones star Alfie Allen and the legendary Emma Thompson. The film is set for release on May 8 on digital platforms and select theaters (if any are open by then), meaning that your quarantine watchlist has just gotten bigger.

More like this
Everything You Need To Know About The 'Knives Out' Sequel
By Grace Wehniainen
Kimberly J. Brown & Daniel Kountz Looked Back On Their ‘Halloweentown’ Romance
By Stephanie Topacio Long
All The Sneaky Lindsay Lohan Movie Easter Eggs In Her New Ad, Explained
By Stephanie Topacio Long
Anne Hathaway’s ‘The Devil Wears Prada’ Anniversary Post Turned Political
By Brad Witter
Get Even More From Bustle — Sign Up For The Newsletter