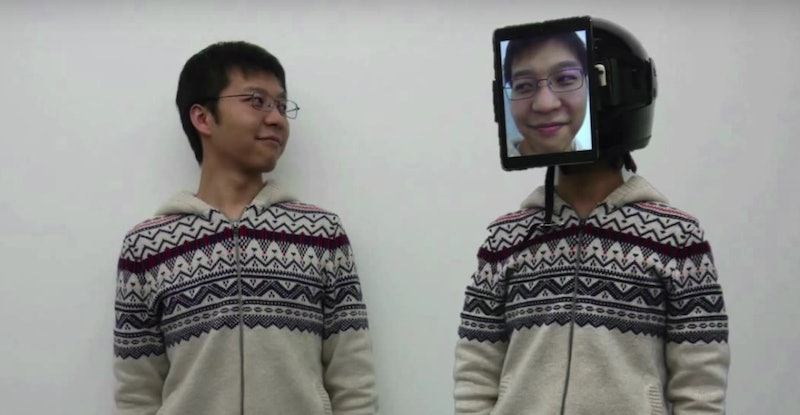 You can get just about anything delivered straight to your doorstep nowadays: pizza, puppies, and maybe soon ... people? This week, Japanese researchers demoed "human ubers," a new technology that would allow people to remotely attend events in a more “realistic” way, sending a surrogate person in your place.

Debuted at MIT Tech Review’s EmTech conference in Asia, the "human uber" works like this: a surrogate person straps an iPad-like screen to their face to physically fill in for another person. The screen would then show the remote person’s live face, and its speakers would transmit their voice.

The technology used in the "human uber" is known as ChameleonMask. A video on the ChameleonMask website further explains that a “surrogate user mimics the remote user by following the remote user’s directions.” Essentially, the remote person tells the surrogate user where to look, point, touch, etc. and allows the remote person to experience the environment as if they were there ... kinda. The sensory experience is limited to sight and sound, as you might expect. Unfortunately, the new technology doesn’t come with touch, taste, or the ever-elusive smell-o-vision that would truly make for a remote immersive experience.

The new technology initially caught the internet’s attention after MIT Tech Review writer Will Knight shared some initial pictures of the ‘human uber’ in a tweet. The photos of the tech in use are about as hilariously unsettling as you might expect.

(Also, have we learned absolutely nothing from Black Mirror?! This is some freaky, awful, futuristic nonsense just waiting to happen.)

According to Knight’s tweet, inventor Jun Rekimoto, a Japanese AR/VR researcher who is affiliated with Sony, called the technology “surprisingly natural.” If you’re unconvinced by those, um, rave reviews, you’re not alone. Twitter responded to the photos of the "human uber" with a resounding “...but why?”

Thankfully, ChameleonMask’s website answers that question, giving examples of when you might use a ‘human uber.’ Perhaps unsurprisingly, most of those examples revolve around cosplaying.

The website suggests you use a "human uber" to live life as a celebrity, cutting to a video of a person dressed as "Just Dance"-era Lady Gaga. And we make it exactly the second example before the suggested uses allude to maybe being a romantic/sexy thing. “Go out with her” the video states showing a woman cosplaying as a scantily clad anime character.

(I mean, did you really think it wasn’t going to become a sex thing, like, immediately?)

Twitter users were quick to point out that this technology has been foreshadowed in pop culture multiple times over the course of the past few decades. Shows from Arrested Development to Modern Family have used some form of robot or human surrogate as a comedic punchline. Even Kanye West has previously employed a robot to attend a gallery opening for him.

Aside from Arrested Development, the surrogate shown has always been some sort of segway-like robot. The "human uber" amps up the "human" part by, well, literally sending a person. I, personally, am not entirely convinced that the new technology isn’t just inherently hilarious. However, its creator says people have been fine with it in their initial tests.

As Select All reports, Rekimoto claims the "human uber" is a more realistic surrogate than the aforementioned iPad-Segway. “Our pilot study confirmed that people could regard the masked person as a right person,” he stated. (But, I mean, recognizing who the "human uber" is supposed to represent is a pretty far cry from people interacting with an iPad-faced human in a normal way.)

It would be admittedly be pretty nice to send someone else to attend events you don’t really want to go to, dropping in to a party for a quick ‘hello’ without actually having to get ready. If that doesn’t scream THE FUTURE IS NOW, I don’t know what does.