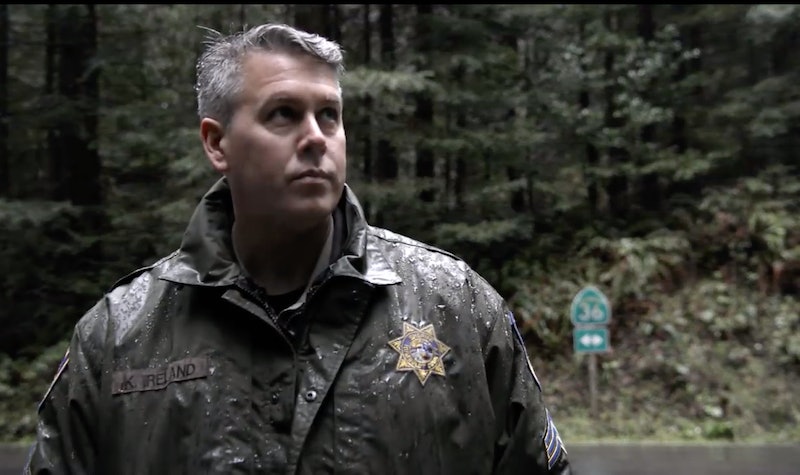 Murder Mountain is a new docuseries that borrows its name from the locale it features, a region of Humboldt County in California. Premiering on Dec. 28, the true crime series explores the disappearance and of Garrett Rodriguez, a local farmer who grew marijuana on the mountain. Rodriguez was eventually found dead, adding him to a long list of other Humboldt County murders that have turned the image of this serene landscape in Northern California upside down, as reported by the Huffington Post.

According to North Coast Journal, Rodriguez was declared missing in April 2013, after friends and family realized that they hadn't seen him since sometime between Christmas 2012 and New Year's Eve. He was later found in a shallow grave in Humboldt County. The ranch on which Rodriguez worked was located in an area known as Rancho Sequoia, which the Lost Coast Outpost describes as an area that became popular amongst "people who came from out of the area to own their piece of paradise," but eventually became a popular location for marijuana farming in the late '70s.

The name Murder Mountain was attributed to Rancho Sequoia after the 1982 murder of Clark Stevens who had reportedly been murdered by serial killer duo of Suzan Carson and Michael "Bear" Carson, also known as the "San Francisco Witch Killers." Rancho Sequoia is allegedly was also the last known location of Robert "Builder Bob" Tennison, who has not been seen since January of 2009.

While those disappearances may be local to Murder Mountain, the North Coast Journal reported that the county has the highest rate of missing persons reports in the state of California — there were 35 people on the California Attorney General's database of missing persons from Humboldt County as of Jan 18, 2018. Some of those names are no longer missing, including Bekah Martinez from the 2018 season of The Bachelor, whose inclusion in an article about the 35 missing people in Humboldt County went viral.

However, that kind of attention hasn't done much for the other missing people featured in the article. In addition to being associated with a high number of disappearances, Lost Coast Outpost reports that Humboldt County has California’s highest rate of gun deaths.

Part of the reason that death and disappearances are so prevalent in Humboldt County may be that the local farmers don't feel comfortable working with law enforcement. Lt. Steve Knight of the Humboldt County Sheriff’s Department told CBS San Francisco "The local growers don’t want law enforcement coming in to where marijuana is at. They are afraid that we will see the marijuana and will take it from them, and that is their living," and explains that there are also vigilantes within the community working outside of the law and won't serve as witnesses for crimes tried in a courtroom.

Knight told CBS, "Many of these communities will try and solve their problems on their own. And by the time that happens unfortunately the problem has magnified." While Humboldt County may be popular the world over for their marijuana output, their primary export is attached to a great deal of tragedy and death throughout the region — which Murder Mountain will explore.

More like this
What Is 'Pretty Wild' Star Tess Taylor Up To Now?
By Morgan Leigh Davies
Where Is Armie Hammer’s Ex-Wife Elizabeth Chambers Now After 'House Of Hammer'?
By Grace Wehniainen and Radhika Menon
Here's What Jeffrey Dahmer's Dad Has Said About His Other Son, David
By Grace Wehniainen
Where Is Lionel Dahmer Today? Jeffrey Dahmer’s Father Reflected On The Serial Killer’s Death In 2020
By Brad Witter
Get Even More From Bustle — Sign Up For The Newsletter