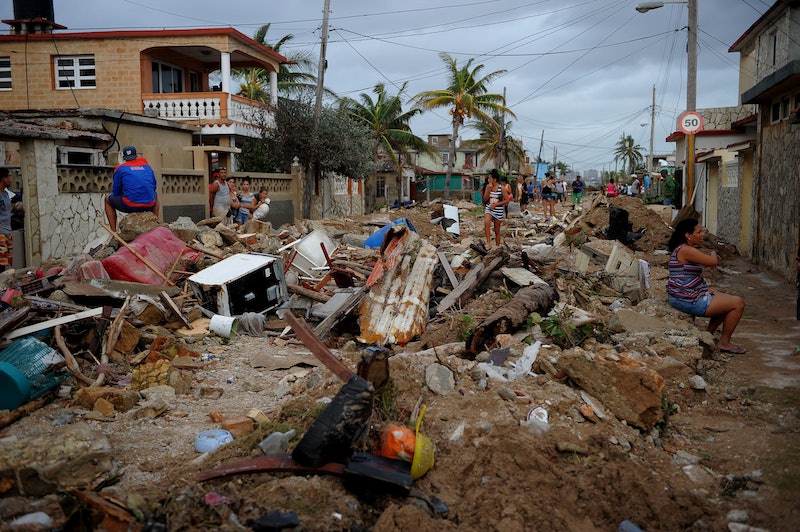 After destroying significant parts of the Caribbean, Hurricane Irma made landfall in Florida on Sunday. The hurricane has winded down to a Category 3 storm with winds at 105 m.p.h., but its initial devastation has been felt in the southern parts of the Sunshine State as well as several islands in the Caribbean. According to official reports of deaths by Hurricane Irma, 27 people have been killed in the Caribbean while three people in Florida have died due to the monstrous storm. One of the casualties includes a sheriff's deputy. Officials expect the death toll to rise as the storm continues to pummel the southern ends of Florida.

Hurricane Irma formed in the Atlantic Ocean on Thursday shortly after Hurricane Harvey hit Southeastern Texas. Irma was initially categorized as a Category 5 hurricane for at least three continuous days, leading up to meteorologists labeling Irma as the most powerful Atlantic hurricane in history.

Strong and scary hurricanes are nothing new but what makes Irma so unique and intimidating is how long it maintained its terrifying cyclone energy. With winds initially packed at 185 mph, Irma managed to sustain those winds and move westward toward the Caribbean where it targeted a number of islands. The Island of Barbuda was particularly affected as its prime minister Gaston Browne reported that Hurricane Irma had left the island in a "horrendous" situation. According to the premier, half of the island's population has been left homeless by the hurricane.

According to official reports, the death toll in Florida is expected to rise. All three casualties reported in Florida have been related to vehicular accidents during the storm. One of the deaths caused by Irma included a man in Monroe County who had reportedly lost control of his car in the hurricane. Two other deaths included that of a sheriff's deputy and a corrections officer in Hardee County. According to local reports, the casualties were caused by a collision between both individuals' cars during the hurricane.

Although The National Hurricane Center has brought Hurricane Irma down to a Category 3 hurricane, the center has advised locals to be prepared for subsequent wind and storm surges. If you live in Florida or in the potential path of Hurricane Irma, keep an eye on verified weather forecasts and remain prepared for violent wind gusts that can prove to be fatal.

As Gov Rick Scott noted on Saturday, locals should be careful about negligence in their preparations for the storm. A surge could prove to be life-threatening, Scott told the press. "Do not think the storm is over when the wind slows down," the governor urged. A violent surge or gusts "will rush in and could kill you."

In addition to the loss of human life caused by this natural calamity, local officials are attempting to understand the degree of property damage caused by Hurricane Irma. While it isn't clear at the moment — given that it is too premature to announce anything — it is likely that Irma has left a major dent in the Sunshine State.

In spite of the chaos caused by Irma, there have been inspiring reports of human kindness and perseverance among locals as well as out-of-states volunteers. As Fox News reported, empathetic Georgians decided to help Floridians fleeing the state for shelter by setting up camp at a gas station off the Interstate 75 exit. With hot dogs, clean water, and money for gas, people in the Southern parts of the United States have proved that no matter how mercurial and downright horrifying this hurricane season is, their sense of philanthropy and duty to their fellow Americans won't falter.

More like this
Why Experts Say Sleeping With A Fan On Isn’t Totally Risk-Free
By Sophie McEvoy
The 6 Best UV Umbrellas, According To A Dermatologist
By Rachael Green
The 8 Best Indoor Door Mats For Your Home
By Jenny White
The Death Tarot Card Meaning, Explained
By Kristine Fellizar
Get Even More From Bustle — Sign Up For The Newsletter