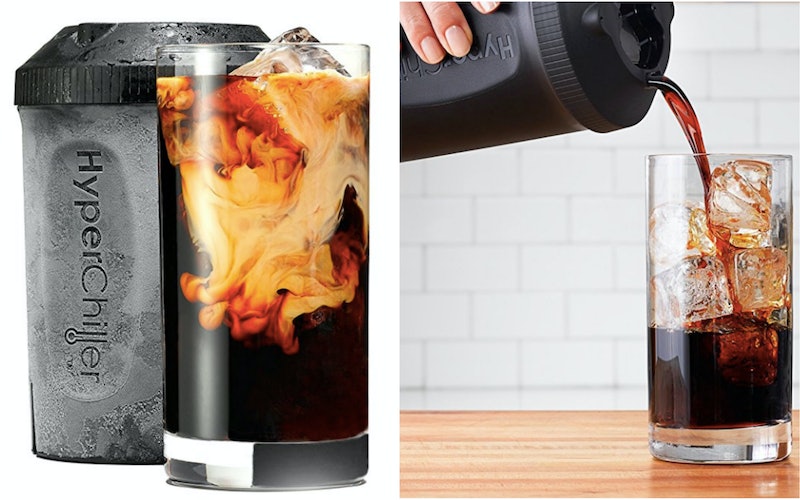 Pouring cereal only to realize you're out of milk. Brushing your teeth BEFORE drinking orange juice. Forgetting to grease your egg pan. There are countless ways your perfect breakfast could take a turn for the worst.

Luckily, few things can go wrong with trusty ol' coffee, right? Think again. Imagine you awakened on a sweltering July day. The last thing you want is to drink something so scalding. But, you also have to be at work by 9 a.m., so there's no time to chill your joe — until now. The Hyperchiller Iced Coffee Maker is here to be your summer morning godsend.

Before now, you would have to resort to one of a few methods to make iced coffee in a flash. You can go with the obvious method of adding ice to your hot coffee, but by the time it gets cold your coffee is diluted. You can skip the ice and just put your mug in the fridge or freezer for a bit, but it will take awhile before the drink is even room temperature. The HyperChiller Iced Coffee Maker bypasses all these methods to make the perfect cup of iced coffee in — wait for it — SIXTY SECONDS. Sound too good to be true? It's also a travel mug. By the time you fill it and get out the door, you'll be well on your way to the perfect cup of iced coffee.

The Hyperchiller Iced Coffee Maker has received almost exclusively positive reviews on Amazon. Perhaps that's because this iced coffee maker is the only thing its parent company has released. Talk about dedication!

Per its product description, the perfect iced cup will be all yours in four simple steps. First, you add water to the bottle, and freeze the entie thing. Then, once it is frozen, pour (or brew directly from a single cup machine) the coffee into the lid of the bottle. After waiting a minute, your hot coffee (as high as 130 degrees) will be chilled to perfection. You can then pour it straight into a glass and add whatever extras you would like. If you have an extra minute to spare, allow your coffee to stay in the Hyperchiller to be consumed straight from the bottle. When you're done, stick it back in the freezer so it's ready for the next time you need something quickly chilled. Ta da!

If you're still a little confused about how the whole thing works, maybe the diagram below will clear things up.

Aside from the obvious benefit of quick chilly coffee, the HyperChiller is perfect for those looking to save a little cash. At popular coffee chains, a medium iced coffee can run you anywhere from $3 to $5. If you want to add an extra like almond milk, the total will be even higher. Say you shell out $4 three times a week for a coffee. Using the HyperChiller instead will allow you to save around $50 a month. Imagine what you can do with all that extra cash at the end of a year!

Plus, this super bottle doesn't have to just be used for coffee. It's perfect for chilling any non-carbonated beverage. Some other recommendations include whiskey, wine, and iced tea.

Take it from the review by Billy S., who purchased a HyperChiller earlier this month: "Already had one for myself and bought a second for a friend. I'm thinking of buying a third for the office! I have a cold brew set to make concentrate which is nice but takes 24+ hours. Sometimes I forget/run out/am lazy and you can literally brew hot coffee into this thing and have ice cold coffee about 2 minutes later. From hot brewed to so cold in less than two minutes that the coffee doesn't even melt ice in the glass. Highly recommend if you're an iced coffee addict like me!"

Billy's already living his best iced life, everyone. Now you can, too.