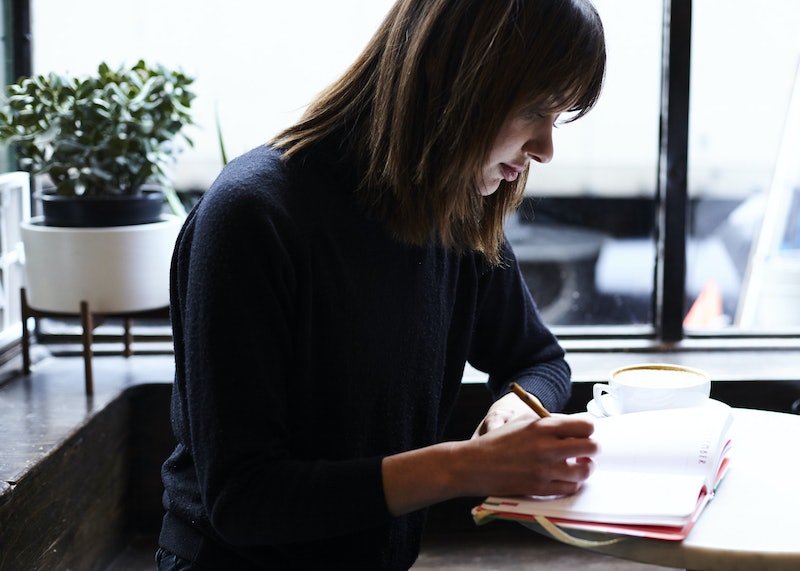 If you want to be a creator, you need a space to create. This idea is not new, of course. Virginia Woolf wrote A Room Of One's Own, an entire book's worth of thoughts on the subject, in 1929. But in many ways, the modern idea of a workspace has completely changed. A dedicated — maybe even beloved —place to return to every day, is a luxury few can afford. But if there were ever an argument for putting our mark on our own creative spaces, it's Patti Smith's memoir, M Train, in which she recounts her memories of New York City's Cafe 'Ino, which closed unexpectedly in 2013.

From he opening lines of M Train, it's clear that the West Village cafe and bar holds a special place in her heart:

"Four ceiling fans spinning overhead. The Cafe 'Ino is empty save for the Mexican cook and a kid named Zak who sets me up with my usual order of brown toast, a small dish of olive oil, and black coffee."

The memoir is a collection of creative thoughts and memories from Smith's life, all centered around her remembrances of her late husband Fred Sonic Smith. Cafe 'Ino is a place that Smith returns to over and over again in the text—both physically and metaphorically.

"I huddle in my corner, still wearing my coat and watch cap," she writes. "It's 9 a.m. I'm the first one here. Bedford Street as the city wakens. My table, flanked by the coffee machine and the front window, affords me a sense of privacy, where I withdraw into my own atmosphere."

From this very first page, we understand that this cafe — this table, even — is an important part not only of M Train, but of Smith's entire creative life. The artist spent long uninterrupted hours there, writing and thinking, crafting the collection of memories that would eventually become her second memoir. And while it's not so strange to imagine someone writing in a cafe — pass one in New York City on a weekday afternoon and you'll find each table occupied — the idea of one single table, in one single place, being this harbinger of creative flow was so foreign to me when I read the book that the concept has stuck with me since.

For most of us, the actually physical act of working and creating has become mobile, changeable, and dependent on the day or our mood. We work from home, on our beds, or on our couches. We work on the subway, the bus, and in cabs on our way to somewhere else. We work pretty much anywhere we can find with a half-decent wi-fi connection and a working socket for our chargers. And while there's nothing inherently wrong with this — writers like Lin-Manuel Miranda and Jason Reynolds have long espoused creating on mass transit — I have found myself thinking a lot more about the way I work, thanks to Smith.

Because for her, it was not just about liking the coffee at Cafe 'Ino more than Starbucks, or about it being the closest cafe to her apartment. Her table at Cafe 'Ino was the place where her creativity came powerfully out to play. A place where she could dive into her own mind, undisturbed, and open herself up to what needed to be set free. In M Train, we see a dedicated work space become sacred, and that space, in turn, elevating the act of creating to those same heights.

We hear all the time how beneficial it can be to designate spaces for certain activities, but it wasn't until reading through Smith's experiences that the idea of a creative space became so necessary to me. The physical connection we have with our work can do so much for our minds when it comes time to put pen to paper, or fingers to keyboard, or even just mind to creative thought. For Smith, this connection became so strong that she couldn't even bear to work at Cafe 'Ino if it wasn't at her usual corner table. If another patron were sitting there when she arrived, she would wait them out in the bathroom, or just turn back around and go back home.

But then Cafe 'Ino unexpectedly closed while Smith traveling. As I read about her experience saying goodbye to her corner, my heart broke. I decided then and there that I would find my own special place in which to make things; it would be my own daily call to creativity, my own "portal to where." And if you have been struggling to complete that first draft, or compose that song, or design that app, it might be time for you to find one of your own.