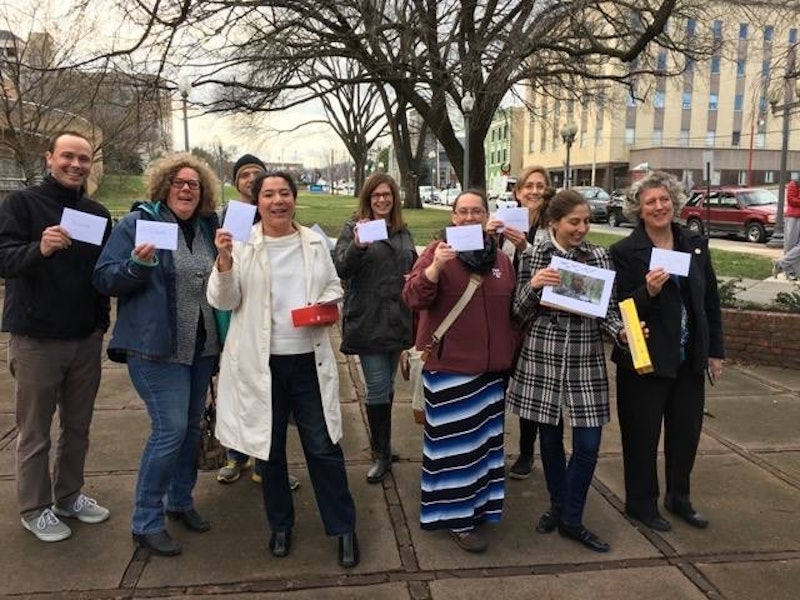 Nov. 8 was a day of shock and fear for many on the American left, after an election that seemingly everyone believed Hillary Clinton would win. Now, the incoming Trump administration enters office with Republican control of both houses of Congress. Moreover, Trump's cabinet picks suggest the most right-wing agenda in recent memory could hit the country.

However, there's reason for hope among those who oppose him. Trump won the presidency despite his opponent receiving more votes (nearly 3 million, in fact, according to the nonpartisan Cook Political Report). Now, some of those voters are starting to organize themselves to fight back against a Trump presidency before he is even sworn in — and they are actually taking some of their cues from their political foes.

In early December, a few dozen friends who had been involved in progressive causes — former Congressional staffers, nonprofit employees, union advocates — got together drafted a document they referred to as the Indivisible Guide. It's a set of guidelines for how activists can most effectively push their members of Congress to support causes they care about and to oppose Trump. They published it as a Google Doc on Dec. 14. "When we posted it, we kind of thought maybe our moms would read it and that would be it,” Sarah Dohl, a former staffer to Texas Rep. Lloyd Doggett, told Bustle.

"I do feel hopeful. I think we’re going to see more activism than we’ve seen in decades."

By the following morning, so many people had read it that Google Docs was unable to handle the traffic and crashed the document. By the next week, the document's writers launched a website, a Twitter account, and a Facebook page. Just a few weeks later, Dohl said that the Indivisible Guide has more than 275,000 downloads and their website has more than 1.2 million views. Around the country, activists are starting local Indivisible groups and putting into effect the tactics detailed in the guide.

Local activists pressured Rep. Bob Goodlatte over his proposal to limit the independence of a Congressional ethics watchdog, which was eventually withdrawn.

"We had been seeing, in the weeks after the election, this outpouring of energy and passion across our social networks across the country," Ezra Levin, another former Doggett staffer who has emerged as one of the leaders of the loose-knit group, told Bustle shortly after the guide went live. "So, we wanted to show that there is a model for success, that this type of directed local organizing can have a huge impact on national outcomes, and that there are concrete steps people can take to get there."

"There's a window of opportunity to change behavior and inspire people to make activism a habit, and that window will close."

"We’re getting overwhelmingly positive responses," said Levin. He appeared Wednesday night on MSNBC's The Rachel Maddow Show, providing the most high-profile coverage that the nascent movement has gotten so far. Indivisible is not alone. It's one of many groups that have begun sprouting up in the wake of Trump's victory. Instead of relying on top-down support from the Democratic National Committee, these organizations are turning to grassroots activism in the face of a political agenda they see as unacceptable. Groups like Daily Grab Back, which gives activists a concrete piece of action every day to fight back against Trump, Wall-Of-Us, which suggests four actions weekly, and Flippable, which aims at focusing on vulnerable races Democrats could win, have all seen similar explosions of interest beyond what their founders dreamed.

"The most shocking thing to us has been how willing people have been to think about things outside of just the national landscape."

"I do feel hopeful," Amelia Miazad, a founder of Wall-Of-Us, told Bustle. "I think we’re going to see more activism than we’ve seen in decades." She had hoped for a few thousand people subscribing to the site, so she was shocked and pleased to find over 40,000 subscribers, getting instructions on how to get involved every week. Even facing what she believes is an awful presidency, she sees this moment as one of hope, as long as people take advantage of it. “There's a window of opportunity to change behavior and inspire people to make activism a habit, and that window will close,” she said.

Chris Walsh of Flippable sees now as a time for Democrats and progressives to reorient their priorities. "I'd always been that irritating person going 'we need to pay more attention to state legislatures,'" Walsh said, referring to his time working on Democratic campaigns before the election. "The most shocking thing to us has been how willing people have been to think about things outside of just the national landscape. We're pretty focused. We're doing the state legislatures, cheap seats — take back our country through winning elections."

It remains to be seen whether this kind of activism can lead to real results — and whether those elections Walsh dreams about winning will go the way Democrats want.

"It's kind of like people who get cancer and they say, 'You know, this was a good thing for me. It made me reevaluate my life and find out what's important to me."

Progressives are high on their symbolic actions for the moment. Celestia Lyman of Daily Grab Back boasted about the group organizing a campaign to mail more than 300 pocket Constitutions to Trump Tower. But the real difference will come in actions that may be less flashy — the group also took some credit for helping the call-in campaign that scuttled Republican efforts to gut the Office of Congressional Ethics. In order to make change, there will need to be more of the latter than the former. "When people are actually making the phone calls like we're asking them to, it is making a huge difference, and they need to know that it's making a difference when they do that," Lyman said.

Even with this hope beginning to grow, progressives are buckling in for a difficult four years. Noah Masterson, who despite no background in politics started Indivisible Austin after reading the group's manifesto, told Bustle that while he's grateful for the chance for progressive grassroots activism to thrive, he certainly wishes it was in a different situation.

"It's kind of like people who get cancer and they say, 'You know, this was a good thing for me. It made me reevaluate my life and find out what's important to me,'" Masterson said. "I get that, but f--k, they still have cancer. I'm sure it would be better to not have the cancer."