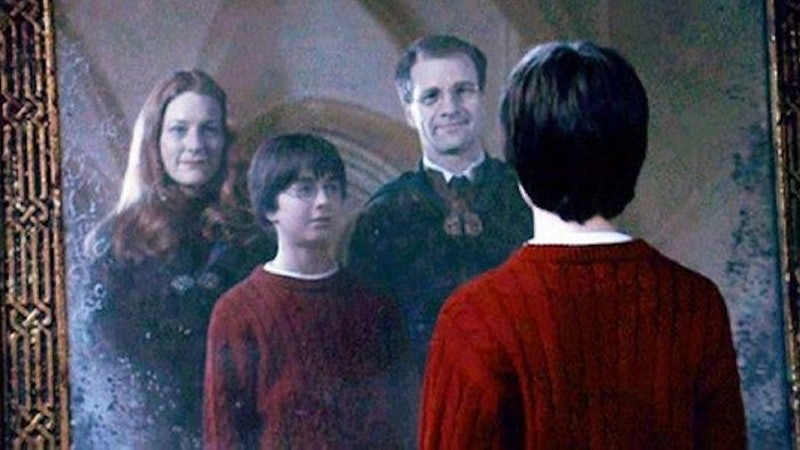 Every Harry Potter fan knows that the series is filled with easter eggs and tiny details, which makes it incredibly fun to re-read. Today's Harry Potter epiphany comes courtesy of Reddit user spice-cream, who shared their a mind-blowing discovery about the Mirror of Erised on a Harry Potter-themed subreddit.

OK, let's take it back to the beginning: You probably already know that "Erised" is "Desire" reversed. But J.K. Rowling actually took it one step further, and you probably didn't notice.

Harry first stumbles upon the Mirror of Erised in Harry Potter and the Sorcerer's Stone when he ducks into an empty classroom to hide from Filch. In that first description of the mirror, Rowling describes an inscription carved around the top that reads: "Erised stra ehru oyt ube cafru oyt on wohsi."

It seems like this is an ancient language, but that is actually not the case. As Reddit user spice-cream points out, if you reverse that inscription, it reads: "I show not your face but your heart's desire." It is a literal description of what the Mirror of Erised does, hiding in plain sight.

It's actually a much more straight-forward explanation of the mirror's power than the one Dumbledore gives to Harry: "The happiest man on Earth would look into the mirror and see only himself, exactly as he is."

Plus, when you think about it, all this reversed text is actually pretty clever, considering that reflections show text in reverse.

In a post on Pottermore, Rowling herself actually alludes to this trick, saying "The mirror’s inscription...must be read backwards to show its true purpose." Rowling writes that the mirror is a very old artifact, and no one really knows how it came to be in Hogwarts.

Even though it's a simple idea, the Mirror of Erised's powers to show your heart's desire prove to be pretty heart-wrenching throughout the series. Many of the desires it reflects are actually impossible. Harry sees himself surrounded by his deceased family. Dumbledore, we eventually learn, sees his family unbroken. Even Ron's vision of being Head Boy is kind of sad when you realize that, since Ron doesn't return to Hogwarts for his seventh year, he never has the chance to make his goal happen.

Of course, this is why Dumbledore warns Harry, "It does not do to dwell on dreams and forget to live." Or, as it would read in reverse: "Evil ot tegrofd nas meard nol lewd otod ton seod ti."