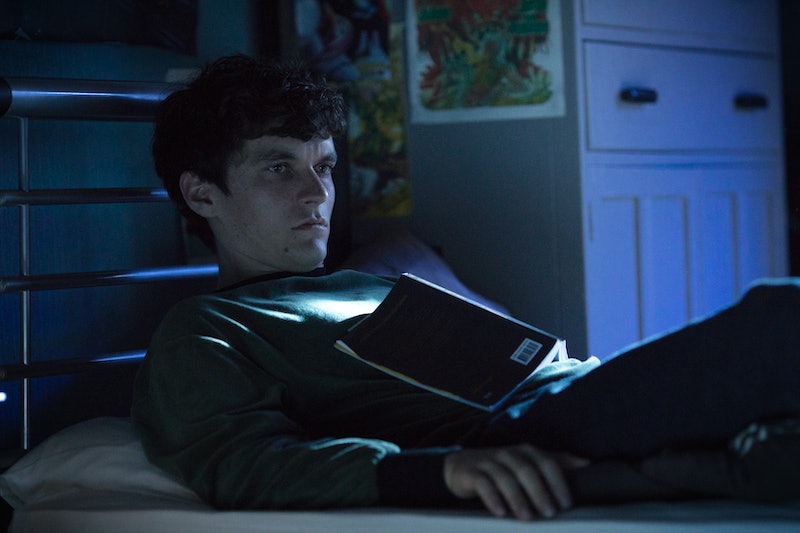 Considering they produce a show entirely about technology, the team behind Black Mirror sure can produce a gorgeous book. Available now, Inside Black Mirror is a behind-the-scenes look at the first four seasons of the show, which first aired on British TV station Channel 4 in 2011, then began streaming on Netflix in 2016. The book covers every episode of the series, but does not offer any information on the Netflix original movie, Black Mirror: Bandersnatch, which was released on the streaming site at the end of 2018. However, shrewd fans of the series just might be able to spot information about Bandersnatch in the book anyway.

For Inside Black Mirror, screenwriter and novelist Jason Arnopp spoke with the show’s creators, Charlie Brooker and Annabel Jones, as well as various crew, casting directors, and actors to get the details on how each episode of the series gets made.

Showrunner Charlie Brooker has sole writing credit on the majority of the scripts, which affords him singular knowledge of the show. In the interviews he conducted for the book, Brooker talks about script redrafts and character changes, and reveals the reasons for choosing certain songs or setting the episode in particular locations. These interviews took place during the production of Bandersnatch, but Brooker wasn't able to talk about the movie. However, if you read the book after watching Bandersnatch, you will quickly realize that Brooker appears to have used some of the ideas he discarded from previous episodes in the movie. The book came out two months before the film, so the clues were there for anyone who read it.

Here are three of Brooker’s quotes from the book that seem to be clues about Black Mirror: Bandersnatch. Warning: There are major spoilers ahead for the Black Mirror episodes "San Junipero," "Playtest," and "White Bear."

1. While discussing the Season 3 episode "San Junipero," Charlie Brooker says he considered setting an episode in the past. "We wondered about a retro episode," he says. "How could we do one set in the past?"

"San Junipero" follows Yorkie (Mackenzie Davis), who falls in love with Kelly (Gugu Mbatha-Raw) in a neon-lit '80s beach town, where all is not what it seems. As it so happens, the two lovebirds are actually living in a computer-generated simulation built to comfort the elderly.

Black Mirror is usually set in the near-future, so the '80s-set episode is quite an anomaly. Brooker says in the book that the time period was important to the story, "because these two people couldn’t have got married as two women in 1987."

They do get married, though, because the '80s setting is a simulation. In reality, Yorkie and Kelly are actually older women, nearing the ends of their lives, in a time technologically ahead of ours.

Charlie Brooker was 13 in 1984, the year Bandersnatch is set, and he said in a recent interview that he wanted to explore his memories of the era in a British 1980s-set episode. Note how much less glamorous Bandersnatch looks next to "San Junipero." Perhaps that's because Brooker actually lived through the grey world of Bandersnatch, and the world of "San Junipero" was a shimmering illusion.

2. In Inside Black Mirror, Charlie Brooker teases an episode where a character would speak directly to the audience, something he had to cut out of Season 3 episode ‘Playtest.' "At one point, we wanted to break the fourth wall," Brooker says. "We had a thing where Cooper [the lead character in ‘Playtest’] gets told he’s a character in Black Mirror."

"Breaking the fourth wall" is a a performance convention in which an invisible, imagined wall separates actors from the audience in a theatre. While the audience can see through this "wall," the actors cannot — except when the fourth wall is broken, and the actor interrupts the action of the play, movie, or show to speak directly to the audience.

‘Playtest’ is the tale of American Cooper Redfern (Wyatt Russell), who travels to London and ends up stuck inside a horror video game. The episode is packed with video games references for serious fans of the genre. (Brooker actually began his career as a video games journalist back in the 1990s.)

Though Brooker scrapped the "breaking the fourth wall" element of the episode, he keeps it in Bandersnatch when certain options are selected by the viewer. I won't give anything away; you'll have to discover the instances for yourself.

3. In Inside Black Mirror, Charlie Brooker teases an episode in which a psychiatrist and a creepy recurring symbol would be important, something he had to cut out of Season 2 episode, 'White Bear." “The psychiatrist asks them to draw a symbol they keep seeing in their sleep, and they draw this glyph, the symbol that we would ultimately use in 'White Bear,'" he says in the book.

The Season 2 episode 'White Bear’ is the first Black Mirror episode to contain a twist that makes the viewer question everything that has happened beforehand. A young woman, Victoria Skillane (Lenora Crichlow), finds herself pursued by masked men in the countryside. People stand by and watch, snapping photos and filming footage of her on their phones, but they do not help her, even when she appears to be in mortal danger. The same, eerie symbol — which looks like a tuning fork turned upside-down — crops up again and again throughout the episode.

That symbol is also present in many Bandersnatch scenes. In fact, it's the mark that the author of the original Bandersnatch novel, Jerome F. Davies, daubs in blood all over the scene of his wife’s murder. It also appears as an option alongside "Netflix" during one of the audience choice segments.

Brooker also cut a psychiatrist character out of "White Bear," but he found a place for her in Bandersnatch. Stefan makes a number of visits to Dr Haynes (Alice Lowe).

There were some major Bandersnatch clues hiding in a book the whole time. I believe there might be some clues about Season 5 as well, but I'll just have to wait to find out.

More like this
Allie Rowbottom Will Have Her Feminism With A Side of Botox
By Samantha Leach
Robert Downey Jr.’s New Film Is A Tender Story of Fatherhood & Forgiveness
By El Hunt
How To Stream 'She Said' In The UK
By Maxine Harrison
The 'Lady Chatterley's Lover' Book Leaves Us With A Troubling Question
By Catharina Cheung
Get Even More From Bustle — Sign Up For The Newsletter