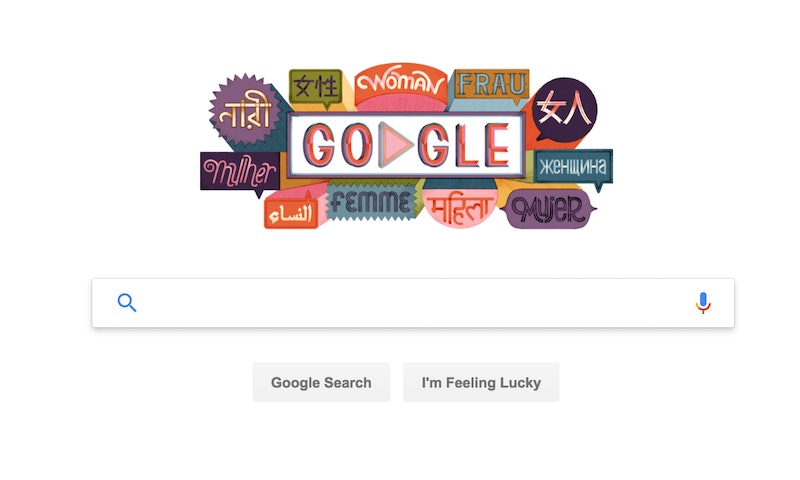 The Doodle celebrates women in their own words using quotes from the profiled pioneers. Per a statement from Google, the Doodle team commissioned female artists “to create stunning images of the inspiring quotes.” Each Google Doodle animation will show a lettered quote displayed in the pioneer’s native language, with subtitles. On March 8, starting at midnight your local time, you’ll be able to see the Google Doodle for 24 hours. If you’re looking to turn your Instagram into an homage to female pioneers, you’re in luck as the artwork and quotes will be easily sharable across social media with the click of a button.

The Doodles include women across multiple fields and eras: writers, scientists, artists, athletes. Each piece showcases someone who is a pioneer in her field, showing a snippet of her legacy in that woman’s own words. Friday’s Google Doodle showcases some of the women who have changed history and shines a light on some of today’s leaders. You’ll be able to easily learn more about each woman on account of...this is all taking place on Google. Here are the thirteen women who will be featured in the Doodle alongside their inspirational quote.

Jemison is an American astronaut and physician. She was the first black woman in space, has practiced medicine on three different continents, and even has her own Lego figurine.

Emma Herwegh: “Let nothing bind you in the world other than your highest inner truth”

Herwegh was a German writer whose role in the 1848 German revolution helped usurp the German autocracy and enforce liberal principles to better serve the working class people of the country.

Chimamanda Adichie: "I matter. I matter equally. Not 'if only', not 'as long as'. I matter. Full stop."

Adichie is a Nigerian Writer whose voice you heard on Beyonce's 2014 song ***Flawless. The feminist activist recently apologized for comments LGBTQ+ leaders critiqued as anti-trans. "I think of feminism as Feminisms," she wrote on Facebook, in an effort to explain her approach to intersectional feminism. "Race and class shape our experience of gender. Sexuality shapes our experience of gender."

Frida Kahlo: "Feet, what do I need them for if I have wings to fly?"

Kahlo was a Mexican Artist known for her self-portraits. Her work is celebrated for how it captured Mexican indigenous culture.

Marina Tsvetaeva: "Wings are freedom only when they are wide open in flight. On one's back they are a heavy weight."

Tsvetaeva was a Russian poet whose work is considered among the greatest in 20th century literature.

George Sand: "The future can awaken in a more beautiful way than the past."

Sand, born Amantine Lucile Aurore Dupin, was a French novelist known for her work celebrated as championing the working class.

Fawcett was a British Writer and Suffragette who campaigned for women's equal rights, championed education, and founded Newnham College, Cambridge.

Mary Kom: "Do not say you are weak, because you are a woman."

Kom is an Olympic boxer from India. She is the only woman to hold the World Amateur Boxing champion six times.

Zaha Hadid: "I really believe in the idea of the future."

Hadid was a critically-acclaimed British-Iraqi architect and the first woman to receive the Pritzker Architecture Prize.

Clarice Lispector: “I am stronger than myself.”

Lispector was a Brazilian novelist and short-story writer. She is considered among one of the greatest 20th century writers.

NL Beno Zephine: “We are too precious to let disappointments enter our minds."

Zephine is a 28-year-old Indian Diplomat, the country's first visually-impaired IFS officer. As a politician and activist, she champions equal rights for people with disabilities.

Sanmao: "A person who has at least one dream has a reason to be strong."

Sanmao was a Chinese-born Taiwanese writer known by some as "one of the first mass media celebrities in the Chinese-speakinger world," per What's On Weibo.

Yoko Ono is Japanese multimedia artist and activist. Her work in both realms has pushed cultural boundaries as well as emphasized peace.

As Forbes recently noted, Google Translate’s AI started exhibiting gender bias in both subtle and overt ways. “Objects that happen to be grammatically masculine are given masculine properties,” Kate McCurdy, a senior computational linguist in Berlin who discovered a similar bias in Bing’s search, told Forbes. “It’s learning to take gender stereotypes and project them into the whole world of nouns.”

Can an algorithm be sexist? I mean, not inherently so. Certainly not more than your car or phone can be sexist. (Although, every time my printer malfunctions it does feel like a hate crime.) However, algorithms are programmed by and learn from people. I don’t even need to ask whether human beings have the capacity for sexism.

Google processes upwards of 40,000 searches per second. (If you feel like wasting time in a mindblowing way, you can watch this live ticker update with estimates of how many Google searches they have been just today.) That’s a lot of people searching a lot of things using a lot of different languages. As Dr. Safiya Umoja Noble, professor and author of Algorithms of Oppression, told Salon, “Certain kinds of industries or ideologies can wholesale take over keywords and identities and communities.” In other words, what people search for shapes what we see.

Friday’s Google Doodle, though small, is significant in showing women across multiple career fields, women positions of power, women who are changing the world. And, for the millions of people who use Google every day, you don’t even need to go out of your way to find it.