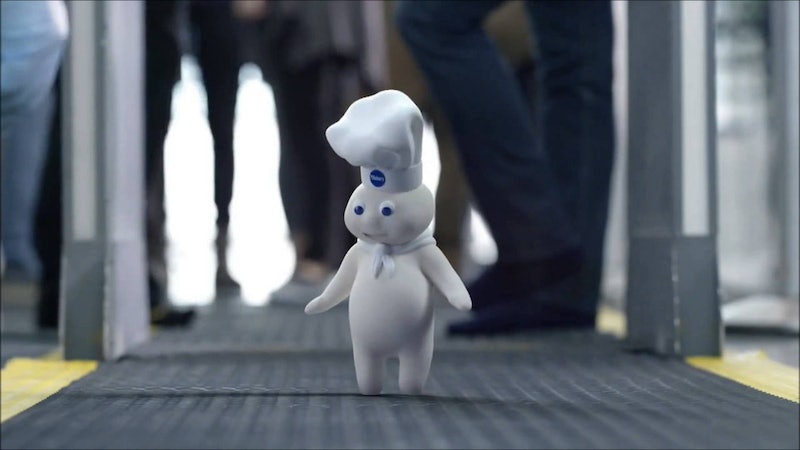 We’re all familiar with the Pillsbury Doughboy, right? Cute little guy, possibly made of dough, wears a baker’s cap, giggles when you poke him in the tummy? Well, what would you do if I told you that the Pillsbury Doughboy’s real name is actually “Poppin’ Fresh?” Would you freak out a little bit, suddenly learning that the loveable mascot you’ve always simply called the Pillsbury Doughboy had a whole separate identity you didn’t even know about? Well, uh… brace yourselves, because that’s exactly the situation in which we currently find ourselves. For what it’s worth, I have friends who are super up on their mascot trivia, and they’re all like, “Pffft, Poppin’ Fresh is Doughboy 101, I don’t understand why everyone is freaking out” — but for the rest of us, this is weirdly big news.

Ryan Schocket over at BuzzFeed recently highlighted this little tidbit of information as seen on the Doughboy’s Wikipedia page, but — as you might expect — that’s just scratching the surface of the long and storied history of both Pillsbury and Poppin’ Fresh. Pillsbury itself actually dates all the way back to 1869, when Charles A. Pillsbury purchased a one-third stake in a Minneapolis flour mill. The mill was renamed C.A. Pillsbury & Co., and according to AdAge, it was profitable from year one. Well done, Pillsbury!

For decades, Pillsbury focused primarily on dry goods — flour,of course, but also cake mixes, biscuit mixes, pasta, and other similar items. In 1965, however, Pillsbury branched out into a new type of product: Refrigerated crescent rolls whose dough came in a tube which, when hit on the edge of something sharp(a table or counter edge, for example), popped out, ready to bake. At the time,Pillsbury was working with the Leo Burnett advertising agency in Chicago — and according to AdWeek, when Leo Burnett copywriter Rudolph Perz was making Pillsbury Crescent Rolls at home one night, he suddenly envisioned not the dough popping out of the tube, but a mascot instead. That’s where the name presumably came from — because he pops out of the tube, of course it makes sense that he’d be called something like Poppin’ Fresh.

As Heather Taylor reported on Advertising Week in 2016, the early sketches of the Doughboy lacked some of the distinctive qualities we associate with the character today: The chef’s toque was present, but the kerchief tied around his neck wasn’t, and he wasn't quite as rotund. In fact, he looks a little like Casper the Friendly Ghost — which, indeed, was identified as one of the issues with these early designs. The other characteristics helped distinguish him from Casper, as did rendering him in 3D. (Originally Perz had intended for the character to be an animated cartoon, but the stop-motion credit sequence of The Dinah Shore Show inspired him to try animating him with “Claymation” instead.)

The Doughboy’s real name likely isn’t the only thing you didn’t know about him, either. Here are a few other factoids that might just blow your mind: