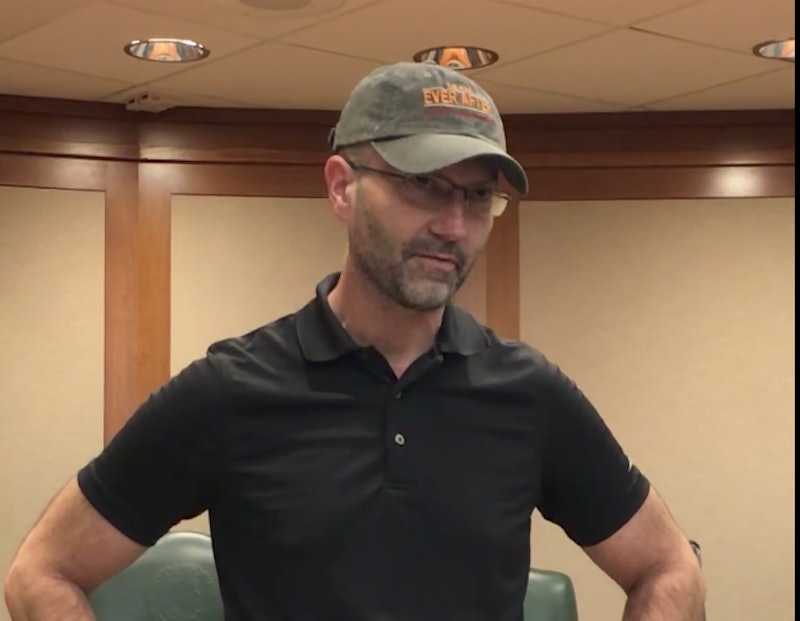 “The thing is,” Ballard told the audience, “I only knew I had a son for the past two years. Twelve years prior to that I kept calling him my daughter.”

The video, which was shared on Facebook by the group Equality Texas, has gone viral, with thousands of people praising the gruff Texan dad for his work advocating for his transgender son, and transgender children around the country.

Although Ballard is a staunch advocate for his son now, he acknowledges that it hasn’t always been easy. He learned his child was transgender when he swept Ashur’s hospital room at the Children’s Medical Center of Dallas, and found a suicide note that said that if Ashur couldn’t live as the person he was inside, he didn’t want to live at all. Ashur had been hospitalized for severe cutting, and when his parents confronted him about the note, he admitted he had tried to take his own life a couple of weeks before, but had not succeeded. It was then Ballard realized he had to make a choice.

Instead, Ballard and his family embraced their son, and went on to advocate for his rights in a state that has repeatedly tried to take them away. Just recently, a “bathroom bill” was debated in the Texas legislature that would have forced trans Texans to use the bathroom corresponding to the sex they were assigned at birth. Fortunately, it was overturned, and Joe Straus, the Texas House speaker, spoke out strongly against it, stating: “I don’t want the suicide of a single Texan on my hands.”

Straus is not hyperbolizing. Due to a number of factors, including the widespread discrimination they face at home, at work, and in public, trans individuals are at a far higher risk of suicide than others, and an August 2016 study found that 30 percent of transgender youth report a history of at least one suicide attempt.

In his speech, Ballard explains that he is not one to talk openly about his feelings, but that he has been moved to do so by the discrimination he sees all around him, from laws telling his son which bathroom he can or cannot use, to the overt racism of a border wall, to the policing of women's bodies.

Read the full transcript of Ken Ballard's speech below:

I’m Ken Ballard. I was asked to talk today because I have a son.

The thing is, I only knew I had a son for the past two years. Twelve years prior to that I kept calling him my daughter. It's what they told me at the hospital.

So for 12 years, he played that role, until he no longer could. Right up until the letter I found in his room telling me that he had tried to commit suicide. When I was faced with that reality, you start going back, you start playing back the history of the signs, the hints, and you really come to the realization that now matters. Because now you have the info, you know what you need to do, and you have a son, so raise him.

Was I going to be his bully? Was I going to try to put him back in a box that fit the rules of my world at the time? Or wait it out and see if it would just pass and go back to the way it used to be? Would I push parental instinct on holding onto the idea of a daughter, or only to end up losing that child altogether?

I say it often — I’ve said it before to anyone who has ever heard me talk — I didn’t have this kid to fulfill my dreams. I had this kid to help him realize his. So, I did what a dad does: I loved him. I still love him. I won’t say it’s been easy. You know, we’ve had our struggles. But, I think if you ask the kid, he knows his mother and I are in his corner always. And as a result, I have a relationship with my son, and I’m not mourning at a headstone.

And I’ll be honest: It’s not in my wheelhouse to talk to people. It’s not my desire to be standing here talking, or talking about my son. Because I’d like to believe we’re at a point that in civilized society none of this no longer matters. The color of skin, how a person identifies, what’s on their birth certificate… But these are not those times.