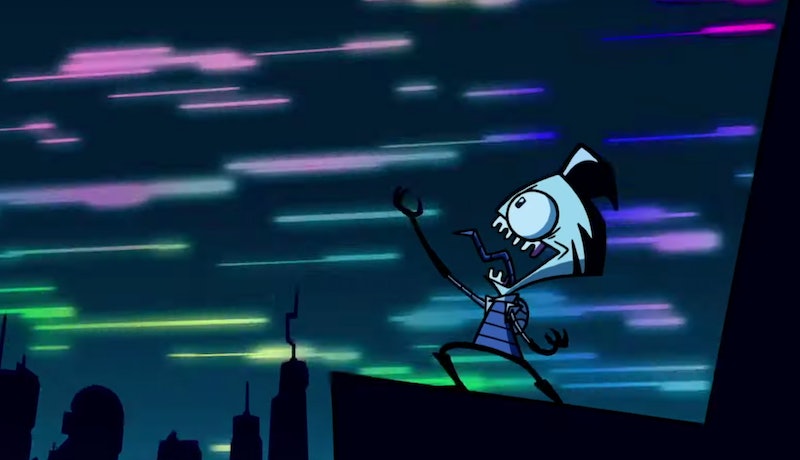 The wacky, horrific, and beloved Invader Zim cartoon is coming back to fans in a brand new movie based off of the original early 2000s show. And if you were wondering how it would live up to the series, the new Invader Zim: Enter the Florpus trailer proves that the cartoon is keeping its signature animation, theme, and spirit.

Nickelodeon canceled Invader Zim in 2004 before the second season was full finished due to poor ratings. But since then, and even during its initial run, the show was a fan-favorite despite being subversive in its animation, content, and messages. Plus, the merchandise for it has never really gone out of production, and over a decade later you can still buy many items featuring Zim and his trusty robot servant GIR at Hot Topic.

However, because of that cancellation, the show never had a resolution. Did Dib out Zim as an alien to everyone at Skool? Did Zim ever get his Invaders from Irk to come — or, well, invade? In case you forgot, Zim was sent to Earth in lieu of his banishment in a fake mission to infiltrate the planet. His people had no intention of following through with his plan and take over; they just wanted him off their backs.

The new Netflix movie's synopsis seems to tease that ZIM will finally find out why he was sent to Earth. "ZIM discovers his almighty leaders never had any intention of coming to Earth and he loses confidence in himself for the first time in his life, which is the big break his human nemesis, Dib has been waiting for," the trailer description reads.

In an interview with Polygon about the upcoming movie, creator Jhonen Vasquez said that he'd turned down revisiting Invader Zim in the past, and explained why he's choosing to do so now. He said:

"The tricky thing about returning was making it clear to the new Nick that inviting Zim back meant inviting Zim back, a thing that wasn’t going to be something else, they were still inviting a pulsating garbage bag of filth encrusted rabid weasels into their studio. For the most part everyone understood what they were signing on for."

According to Vasquez, it just happened that the stars aligned between him and Nickelodeon in 2019, and the movie was born. "I know I wouldn’t work on anything until I had an idea that justified the work beyond simply providing something because people wanted it," he said. "I had to think it sounded fun."

Fans are obviously overjoyed at the return of a childhood classic, sharing favorite scenes and hyping it up on Twitter.

Polygon also talked to Vasquez about how his work in darker, more adult comics, influenced Zim. "Yeah, I love horror movies and things that come from nightmares," he said, "but I love fantasy and adventure and kids shows and musicals and all kinds of things that make up a person that exists beyond a two-dimensional projection of 'that guy who draws murdery stuff.'"

Even though Invader Zim is a show for kids, it definitely still had "murdery stuff" and other aspects that were a little evil and macabre. But that's what fans like about it, and with the same creators behind the Netflix movie, they'll be pleased with this one too.