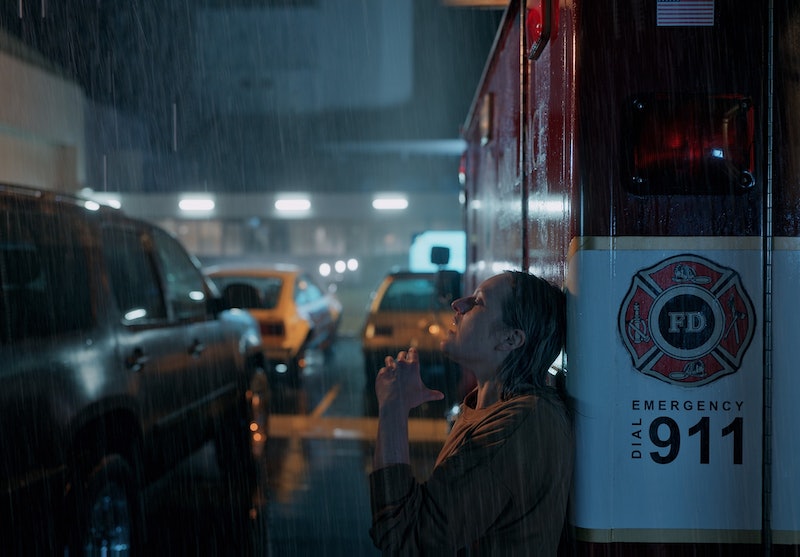 He may be gone, but he'll never really disappear. The Invisible Man trailer starring Elisabeth Moss takes a look at an abusive relationship that continues to haunt her — and it is terrifying. This new Invisible Man, written and directed by Leigh Whannell, updates the monster movie classic by turning it into a story of domestic violence, and an abusive partner who won't let go.

The trailer begins with Moss's Cecilia Kass sitting in an attorney's office being told that her abusive ex Adrian, a wealthy scientist played by The Haunting Of Hill House's Oliver Jackson-Cohen, has taken his own life. She doesn't believe it, and despite the insistence from her family and friends that he really is dead, she just might be right.

"You don't have to be scared of him anymore," her friend tells her over the phone, but Cecilia knows better. As the tagline for the horror movie states, "What you can’t see can hurt you." Celia doesn't think she's being haunted, she thinks that Adrian found a way to make himself invisible so that he could torment her. "He was a sociopath completely in control of everything," she explains. "He said that wherever I went he would find me. Walk right up to me and I wouldn't be able to see him."

For writer-director Whannell, the idea of the Invisible Man was a perfect representation of the effects of an abuser. "The idea of a spectre of somebody haunting you, is a great metaphor for one of these relationships where people are scared and traumatized," he told Empire in a breakdown of the trailer. He added, "I really just wanted to tell the most nerve-wracking, scariest Invisible Man story I could."

The director added in a separate interview with Games Radar that Adrian's invisibility "is a great metaphor for gaslighting." And Twitter agreed.

Taking the original Invisible Man story and turning it on its head was something that appealed to Moss when she took the role. Though she hasn't said much about it, she previously teased the project in April in an interview with The Hollywood Reporter, calling it "a really feminist story of female empowerment."