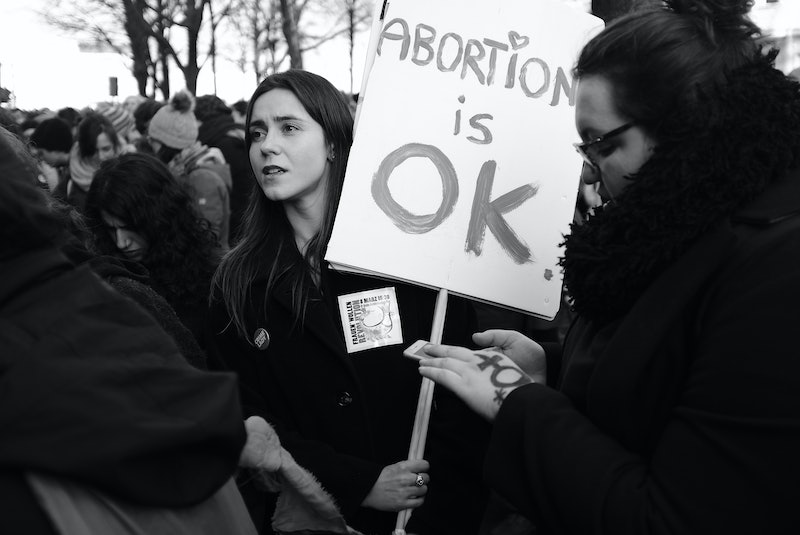 On Wednesday, shortly after an early-morning vote in the state's House, a vote on Iowa's "heartbeat bill" was fast-tracked through the state senate by the Republican majority. The bill aims to ban abortions following the detection of a fetal heartbeat, which would generally be around six weeks into a pregnancy, according to Planned Parenthood.

If the bill passes, it would be one of the strictest pieces of abortion legislation in the country. But it's not the first time that a heartbeat bill has been proposed or passed. In recent years, Ohio, Arkansas, Alabama, Mississippi, Kentucky, North Dakota, Wyoming, Kansas, and Texas have all either introduced or passed fetal heartbeat bills in their state legislatures. In 2013, a federal appeals court rejected the heartbeat bills passed in North Dakota and Arkansas; this court's jurisdiction also includes Iowa, according to CBS News.

Iowa Gov. Kim Reynolds has not yet indicated whether she would sign the bill. However, Reynolds' press secretary, Brenna Smith, told NBC News that the governor "is 100 percent pro-life and will never stop fighting for the unborn," implying that she was open to signing the bill.

Earlier on Wednesday, just hours before the Iowa Senate vote, the bill passed through the Iowa House, which is also controlled by the GOP. The Democratic minority attempted to take a stand against the bill during the House floor debate, which started on Tuesday afternoon and continued until early Wednesday morning. Democratic Rep. Vicki Lensing slammed the bill for infringing on women's rights, NBC News reported.

"How dare we think that the privacy and decisions of a woman and her medical choices are up to us to determine?" Lensing said during the floor debate. "I am personally offended by this bill that seems to second-guess a woman's ability to make an unintended and difficult decision."

Democratic Rep. Beth Wessel-Kroeschell also denounced the heartbeat bill on Tuesday, arguing that all women "should be able to obtain reproductive health services, including abortion, free from political and economic barriers."

If Reynolds does sign the bill, TIME reported that the bill would likely face legal challenges on the basis of violating Roe v. Wade and other abortion-related Supreme Court rulings. But Republican Sen. Jake Chapman hopes that the Supreme Court would use Iowa's heartbeat bill "as a vehicle to overturn Roe v. Wade." In fact, according to the Des Moines Register, Republicans in favor of Iowa's heartbeat bill actually hope it faces legal challenges, so it can advance to the Supreme Court.

The Supreme Court declined to hear the North Dakota and Arkansas cases after a federal appeals court rejected their heartbeat bills. However, Republicans opposed to abortion hope that the appointment of Supreme Court Justice Neil Gorsuch coupled with the existing precedent for fetal heartbeat legislation pushes the Iowa bill through to the highest court. Ultimately, anti-abortion lawmakers hope that the Iowa heartbeat bill will lead to the overturning of Roe v. Wade by forcing the Supreme Court to once again "weigh in on the issue of life," according to Republican Rep. Shannon Lundgren, the bill's floor manager.

Iowa has been on the path to more restrictive abortion legislation for quite some time. Last year, Iowa Republicans passed a 20-week abortion ban that was signed by then-Gov. Terry Branstad; the ban only made an exception for pregnant people whose lives or health were in danger. However, the Iowa Supreme Court granted a emergency temporary injunction to halt a portion of the ban following challenges from Planned Parenthood and the American Civil Liberties Union, Reuters reported at the time. These same organizations have expressed outrage over Iowa's current heartbeat bill, and are expected to appeal it immediately if Reynolds signs it.