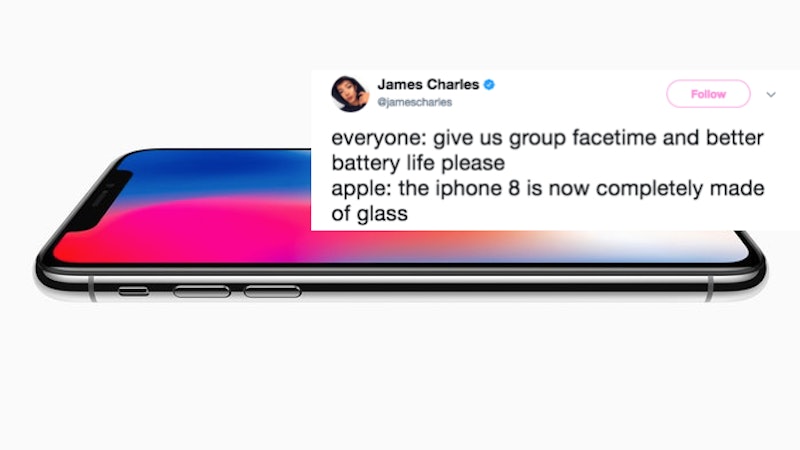 The time-honored tradition of the highly-anticipated Apple product release continued today with the tech company's debut of the iPhone 8, 8 Plus, and X. There were plenty of features to discuss after the release, including the new models' compatibility with wireless charging, new advanced camera modes, and an improved processor. But the thing that most people are freaking out about is the change in design for the back of the new iPhones. The iPhone 8 has a glass back, and Twitter is panicking about the next-level fragility of the new device.

The iPhone is already not known for its durability. Shattered screens are a frequent complaint among users, so much that Twitter's first reaction to the news was panic about how there are now just more surfaces to crack on the pricey technology. This is not the first time an iPhone has had a glass back as part of its design though; the iPhone 4, now an ancient artifact in the tech world, also deployed a glass back. Apple says that the glass utilized on the back of the new iPhone 8, 8 Plus, and X is the most durable glass used in iPhone construction to date, but that hasn't stopped Twitter from worrying about Apple's new aesthetic choices for the iPhone.

Larry David's grimace sums up what so many are feeling about the new iPhone: inevitable shattered glass ... times two.

Double the surfaces to break, double the replacement costs, double the disappointed reflections to stare at.

3. I Can See The Future, & It Holds iPhone Tragedy

Twitter users are not optimistic about their ability to not break the new iPhone.

4. I Already Broke It

It's a done deal.

This is actually kind of pretty. I wouldn't hate a web of rainbow spider cracks on the back of my phone.

Apple stores are going to being inundated with screen repair appointments in the near future.

People are not buying the "durable" glass line in Apple's product description.

Some people think the new iPhones are nothing but an iPhone 7 with a glass back.

A lot of people have been waiting for Apple to add a Facetime capability to include more than two users in a conversation, and were hoping this new release would fulfill their wishes. Better luck next time, guys.

Other tech companies have tried to produce phones that at least give off the perception of being durable, by using construction materials like plastic and metal. Apple went a different direction.

11. But Wireless Charging Is Cool

The reason for the glass back is that it allows the iPhone to be charged wirelessly, a feature that has not previously been available for Apple products.

Kind of like more to love ... but actually the opposite.

And then there were the tongue-in-cheek challenges to up the ante on the technology.

Well, there are actually some major differences.

Some were not all that thrilled by the new iPhone.

17. But Some Had A Positive Outlook

One of the few people on Twitter who expressed approval for the all-glass design.

A glass-half full way of looking at the news.

iPhone keeps coming up with these crazy features, when all people want is three-way Facetime.

20. The iPhone Of The Future

Predictions that future iterations of the iPhone will just get more fragile and with less parts is probably not that far off.

21. All We Want Is A Decent Charger

That's the real technological advancement we're all looking for.

The glass back to the iPhone 8, 8 Plus, and X is clearly going to take some getting used to. Only time will tell just how durable these new phones will be.