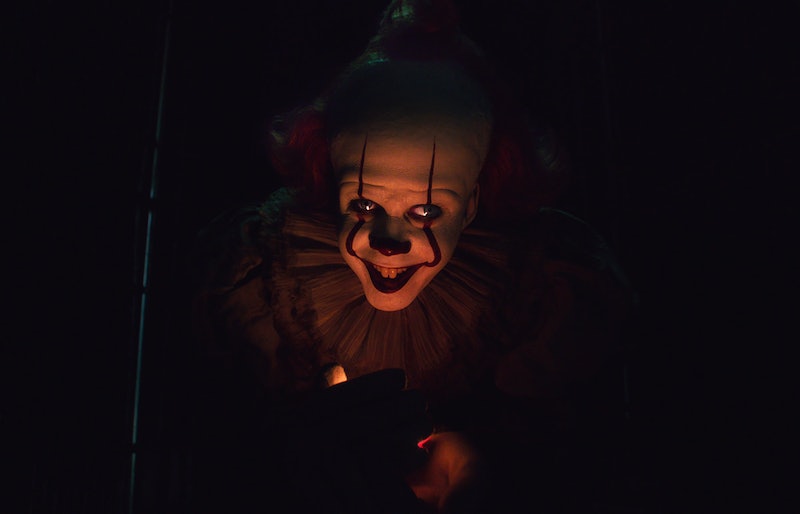 Pennywise is back, but lucky for the children of Derry, Maine, so are the Losers. Bill, Beverly, Ben, Richie, Mike, Eddie, and Stan have returned 27 years after their defeat of the evil clown, only to find out that they didn't really defeat it at all. The It Chapter Two trailer teases Pennywise's terrifying return, and it definitely looks like the Losers' Club has their work cut out for them.

The new It Chapter Two trailer premiered at a special Comic-Con preview on Wednesday, July 17, and hit YouTube the very next day. And, boy, does it live up to the hype. Gone are the days of childhood innocence. The Losers' Club has grown up, and, while they seem happy to see each other again, they don't seem too pleased to be reuniting to face off against Pennywise, the clown that haunted them in 1988 and 1989. "We made an oath," an all grown up Mike reminds the Losers at dinner — if Pennywise, or It, ever returned, they would return to fight it, and now it's time to follow through. "We didn't stop It," he says. Cut to Bill running through a freaky clown-themed funhouse trying to save a little boy from Pennywise's clutches (or, should I say, teeth).

Just because the Losers' Club is all grown up doesn't mean fans of the 2017 hit It will have to say goodbye to the beloved young actors who made the story so compelling. It Chapter Two will feature the characters in the "present day" (2016) and in flashbacks, which means teenage actors like Sophia Lillis (Young Beverly) and Finn Wolfhard (Young Richie) will be back at work alongside newcomers to the franchise, Jessica Chastain (Beverly) and Bill Hader (Richie).

Speaking to Indiewire, Hader teased that It Chapter Two would be bigger and better than the first film. "It's bigger than the first one," he said. "It's an epic horror film. It feels like Lord of the Rings or something — just, 'Whoa! This is cool!'" Cool, and also terrifying.

The grown-up cast o It Chapter Two joined Conan O'Brien for a special Comic-Con appearance on Wednesday, and even they had to admit that acting opposite Bill Skarsgård, Pennywise himself, did scare them from time to time. Speaking of their first table read, Chastain told O'Brien that she was unprepared for how frightening Skarsgård's performance would be. "All of a sudden, Bill starts saying his character," Chastain recounted, "And he just turned to me and, like, screamed in my face, 'Boo!' You know, like that weird voice he gets?" He must have caught her off guard, because Chastain continued, "And I yelled like I was six-years-old in front of everyone — in front of all the executives at Warner Bros., it was so embarrassing."

McAvoy even admitted he dreamed about Skarsgård's Pennywise, though he was probably joking.

It Chapter Two will hit theaters on Sept. 6, so fans won't have to wait too long to see how the Losers' Club defeats Pennywise. If they succeed, that is.

More like this
Anne Hathaway Shared A "Thrilling" 'Princess Diaries 3' Update
By Darshita Goyal
James Cameron May Come To Regret His 'Titanic' Door Experiment
By Stephanie Topacio Long
Taylor Lautner Copped To Finding Jacob "A Little Annoying" In Twilight
By Stephanie Topacio Long
Reese Witherspoon Confirms This Fan Favorite Will Return For 'Legally Blonde 3'
By Jake Viswanath
Get Even More From Bustle — Sign Up For The Newsletter
From hair trends to relationship advice, our daily newsletter has everything you need to sound like a person who’s on TikTok, even if you aren’t.