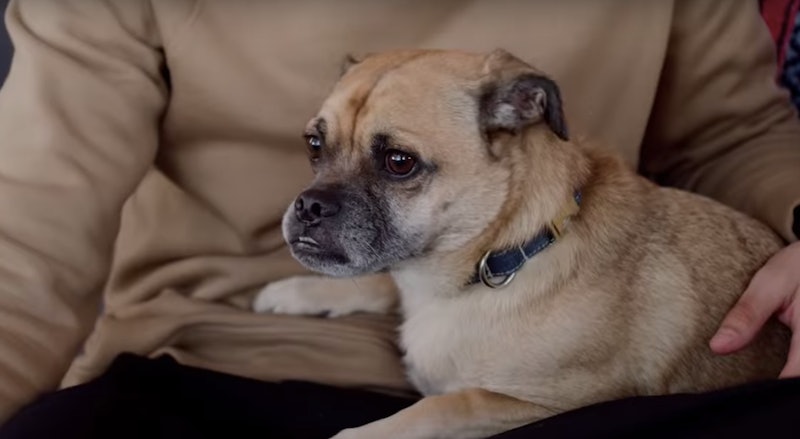 Netflix's It's Bruno! follows Malcolm (played by series creator Solvan "Slick" Naim) and his rescue dog as they wander around Bushwick, Brooklyn. The two are clearly inseparable, and Malcolm gets upset whenever anyone touches his dog, calls him the wrong name, or doesn't let him bring Bruno into a store. But luckily, thanks to the It's Bruno! dog's Instagram, you can appreciate him from afar all you want.

As Naim told Variety, Bruno is played by his own rescue dog — also named Bruno, of course. "I always knew there was something very interesting and charismatic about [my] dog," Naim explained. "Bruno always has these facial expressions and a demeanor about him that's hilarious. He's just a loving dog and he always wants to show you attention. He's never angry or mad. We can all learn a little something from him."

Indeed, if the show's trailer is any indication, Bruno brings people together — often much to Malcolm's chagrin, as mere strangers will approach him and start petting his dog without asking permission (a no-no in New York). However, Bruno also helps to attract a beautiful woman named Lulu (GLOW's Shakira Barrera), who is apparently riveted by the dog's "daily routine." As for Bruno's real-life routine, that is fairly well-documented on his Instagram, which doubles as PR for his owner's Netflix series. Here are some of the cutest posts.

More like this
Here’s Everything Coming To & Leaving Netflix In October
By Jake Viswanath
Ed McVey Shares A Surprising Connection With Eddie Redmayne
By Catharina Cheung
The First Clip From Netflix’s Queen Charlotte ‘Bridgerton’ Prequel
By Bustle Editors
What’s New On Netflix: Ana De Armas’ 'Blonde' & A Nick Kroll Special
By Arya Roshanian
Get Even More From Bustle — Sign Up For The Newsletter