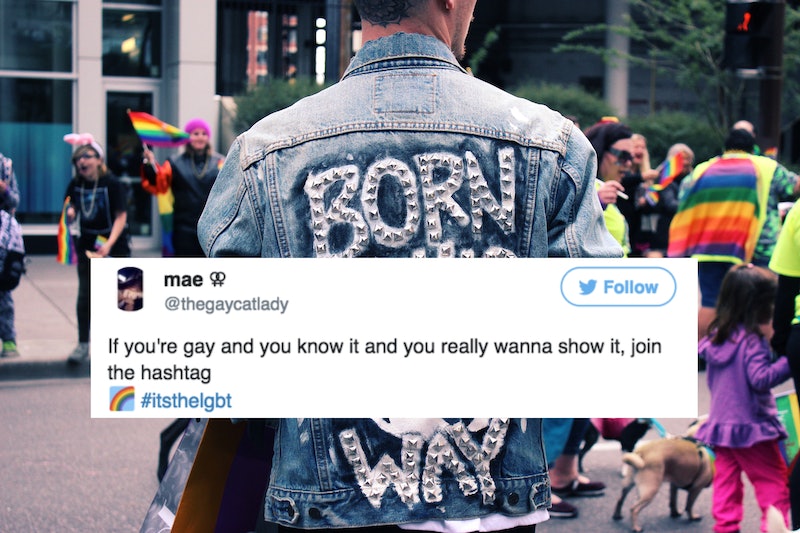 Ladies, gents, and all people of the rainbow community, prepare to feel many feelings. The hashtag #ItsTheLGBT has started trending on Twitter, and its focus is all about celebrating your fine, queer self through the ancient art of the selfie. Although people of all ages have been using it, most tweets appear to be posted by teenagers — a group that isn't exactly known for self-acceptance. If the sight of young, queer people embracing their identity doesn't warm you to your very toes, you probably ought to get checked out by a doctor. Obviously, your Feels Box is malfunctioning, you emotionless android.

The pride hashtag appears to have gained popularity on Saturday, when user @thegaycatlady asked her followers to post selfies tagged with #ItsTheLGBT. "If you're gay and you know it and you really want to show it, join the hashtag," she wrote, tweeting a series of selfies.

By Tuesday, thousands of LGBT users had done exactly that. The idea is simple: If you're LGBT, post a selfie (or five) in which you are, to paraphrase Beyoncé, feelin' yourself. As Pink News put it, #ItsTheLGBT "stand[s] against all detractors and protect[s] young, out LGBT people with its overwhelming joy, warmth and acceptance."

Scrolling through the hashtag on Twitter makes it clear that beauty comes in all shapes and sizes.

Many users took the opportunity to cheer others on. Meanwhile, some even chose to come out to Twitter.

A few had never participated in an LGBT hashtag before, and they decided now was as good a time as any.

Others were old hats at this point.

All the tweets had one thing in common: The users are comfortable in their sexuality. On Saturday, @thegaycatlady tweeted that she was thrilled with its popularity. "So happy I started the #itsthelgbt hashtag. You guys are so cute and meeting people and it's precious," she wrote.

Negative attitudes toward LGBT people may be slowly changing, but the legalization of same-sex marriage doesn't mean life changed overnight. Compared to their peers, research has shown that LGBT youth are far more likely to experience harassment, bullying, and violence in school. According to the Centers for Disease Control, "LGB youth are at greater risk for depression, suicide, substance use, and sexual behaviors that can place them at increased risk for HIV and other sexually transmitted diseases (STDs)." Then there's the oft-cited fact that 40 percent of homeless youth identify as LGBT, and family rejection is an all too common factor in their homelessness.

However, as #ItsTheLGBT shows, the situation is improving in many ways, and more and more LGBT youth appear to be more comfortable with themselves. According to a 2011 research study, the number of lesbian, gay, and bisexual teens who come out to family and friends has increased dramatically in the last two decades. In 1991, the average "coming out" age was 25 years old, but by 2010, it dropped to 16.

It's worth noting that the Internet has only helped the visibility of the LGBT community. #ItsTheLGBT is far from the only queer pride hashtag out there. In early August, #LGBTbabes shone the spotlight on, well, LGBT babes, including Brooklyn Nine Nine's Stephanie Beatriz. Each year, people take part in Bi Visibility Day on Twitter, Instagram, and other forms of social media. In February, #BlackGaySlay celebrated both race and sexuality.

While there's still a long way to go before LGBT people are actually equal, it's incredibly heartwarming to see such self-acceptance, especially in young people. Here's hoping there will be many more, similar hashtags in the future. Who knows what fabulousness is in store for 2018?