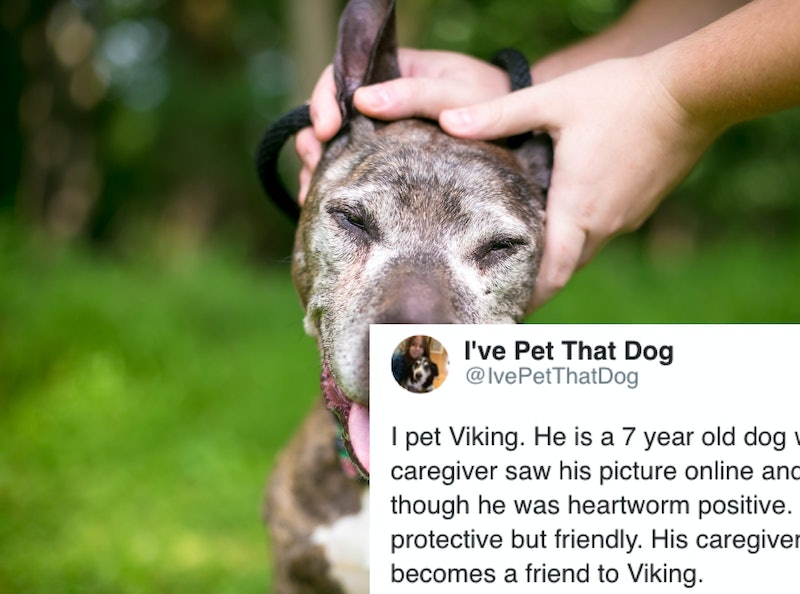 Finding a dream job at any age is commendable, but a Twitter user younger than Google Chrome has landed the best gig known to man. Gideon Kidd, who is nine, has nearly 100,000 followers on his "I've Pet That Dog" Twitter account. The premise is as straightforward as it sounds. Gideon's Twitter bio explains it all: "My name is Gideon. I am a 9 year old boy who likes petting dogs. These are pictures of dogs I’ve pet." A news clip about Gideon and his dog-petting adventures shows him wearing a shirt that says, "Can I Pet Your Dog?" Drake University in Iowa even invited him to meet (and pet) the school's bulldog mascot.

It isn't clear if the account with the apt handle @IvePetThatDog is managed by a relative, but given the fact that the Internet is a cesspool and Twitter's minimum age requirement of 13 years old, it's likely that Gideon isn't posting himself. Still, all of the account's tweets are written in the cadence of an elementary schooler, and it's honestly heartwarming. According to an interview with the Des Moines Register, Gideon has pet more than 360 dogs since he started the Twitter account, which means he's done more in his short life than many of us ever will. When asked about his huge following, he chronicled it well. "When I started the Twitter account it's like about 70, 80, 100, then it was 500 and one day after school it was 1,000," he says in the Register interview.

There's an overabundance of dog-related accounts on Twitter. @WeRateDogs, an account dedicated to dog rating, has nearly seven million followers and the owner is making six figures, according to TIME. Meanwhile, @RacismDog points out racist dogwhistles and has more than 510,000 followers. But Gideon is bringing something new to the Internet with his no-nonsense descriptions of the dogs he pets, and I'm all the way here for it. The interview with the Des Moines Register is filled with the kind of hilarity that you can only find when talking to a 9-year-old. When asked his favorite dog he's ever met, he shares the name of the dog in the room with him. Another excerpt:

When I first started the website, the dogs were awesome, but now I've learned dogs aren't just awesome. They're amazing. [...] Just a few days ago, a woman said, "Hey, come to my house and pet our dog," and it was Precious. Precious was amazing. Everybody started commenting it was like half-human because dogs' eyes and humans eyes look different, but Precious' eyes look like humans' and it was hilarious.

Basically, Gideon just gives us stream of consciousness when talking about his dog petting hobby, but it works. He loves dogs, and he loves petting them. What could be simpler? And even though Gideon has three cats, but he says he doesn't plan on launching a cat petting account anytime soon. "It would be weird knocking on a stranger's door saying, 'Do you have a cat? Can I pet it?'" he wisely told the Register.

If you're a fan of dogs and commentary from children, you should probably follow @IvePetThatDog immediately. Even if you aren't a kids person, it's hard to not follow Gideon and his dog excitement. It's Gideon's world, and we're all just living in it, but it's impossible to be mad about it. Gideon says he wants to keep the Twitter account going as long as he can, which means we could one day have teenager Gideon sharing facts about the dogs he meets. I can't think of anything better.

More like this
Behind The Hilarity Of The "POV: You Walk Into My Room" TikTok Trend
By Lexi Inks
Why TikTok Is Flooded With Controversial Videos About "Pick Me Girls"
By Courtney Young
This TikTok Song About An Unrequited Romance Has FYPs In Shambles
By Emma Carey
TikTok's Butter Board Might Be The New Cheese Plate
By Emma Carey
Get Even More From Bustle — Sign Up For The Newsletter