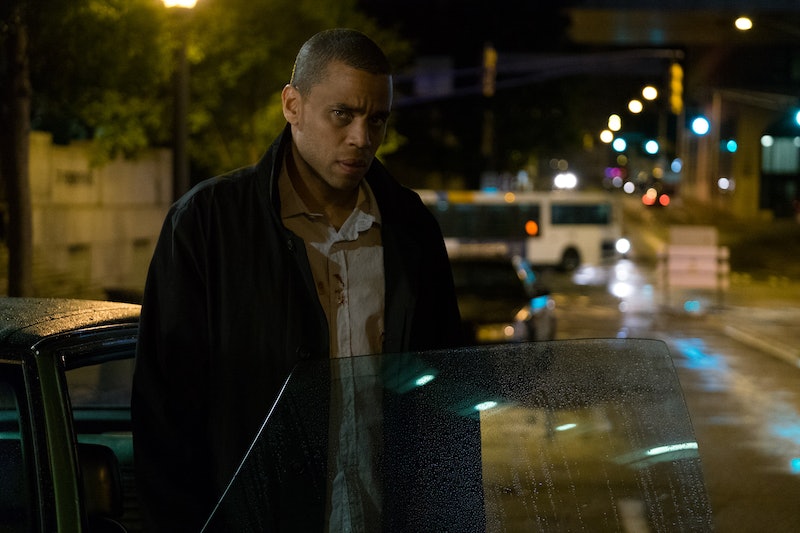 Releasing in theaters and on demand on Aug. 23 is a modern remake of a cult classic horror film, one that often comes to mind when discussing "mindf*ck" movies: Jacob's Ladder. The 1990 film focuses on Vietnam War veteran Jacob (Tim Robbins) and his struggles with separating reality from nightmarish fantasy after coming home from war. This reboot isn't a shot-for-shot remake; rather, it uses the original's trippy, disorienting style to show the effect post-traumatic stress disorder (PTSD) has on many veterans and their families. Speaking to Bustle over the phone, new Jacob's Ladder star Michael Ealy warns that — despite its thriller categorization — the movie is very gritty and real in some ways and explains how a personal connection to the story drove him to exhaustively research the disorder.

"I’m not going to fool people into thinking this is a happy story," Ealy says. "[PTSD] is something that is affecting people all over the world. And it has for centuries."

So while the new Jacob's Ladder does pay homage to the original via some very key quotes and names, the overall narrative has a new focus. Jacob (Ealy) is a veteran of the Iraq War, whose seemingly perfect life as a husband, father, and doctor begins to spin out of control when he finds out that his brother, Isaac (Jesse Williams), has mysteriously turned up alive, despite seemingly being killed in action. Of course, this is also wrapped up in the way the war itself impacted Jacob's mental health.

"The core of the research that I did for this film was on PTSD and experimental medications for PTSD," Ealy explains. "This is a psychological, gut-wrenching thriller, but at its core, it’s about a guy who’s suffering from PTSD. And this is happening to our soldiers as we speak, every single day, and it’s happening to their families."

According to the United States Department of Veteran's Affairs, anywhere between 11-20% of every 100 veterans who served in Iraq have experienced PTSD in any given year. The organization explains that people with PTSD may experience any of four main symptoms: re-experiencing past trauma, avoiding experiences or situations that might be reminders of that period in time, negative changes in behaviors and feelings (for example, avoiding relationships, forgetting or being unable to talk about the past), and "feeling keyed up," or in other words, always feeling on edge.

Despite the work he did to understand these symptoms, Ealy cautions audiences to not think of Jacob's Ladder as "a documentary on PTSD." The film does indeed focus heavily on the more emotional impact of this disorder, heavily couching it in visual metaphors and allegories. Jacob is haunted by ghosts and as he loses his grip on his thoughts, they begin to appear more frequently, which builds to a twist conclusion that's dramatic and extreme. A PTSD lecture, this is not.

But the core of the story lies not in its thrills, but its relationships. Ealy's performance is strongest in these moments when we see Jacob's relationship to his wife, played by Nicole Beharie, and estranged brother. There's a personal connection that shines through, which is something Ealy touches on.

"My uncle went to Vietnam. And he died when I was 19 years old. But he went to Vietnam and he never came back the same person. I talked to some of my family members before doing this role," he says. "It was extremely personal. And it was hard to hear because I have fond memories of him, but I also could tell that unlike my mother, who didn’t go to Vietnam but was in the army for a little bit, he wasn’t quite the same. And you could always tell he was fighting something."

Over the course of the film, Jacob's sureness in his reality begins to falter, and that feeling of always fighting something comes across not just in his words but in his actions. Some of the most effective scenes in the film are the ones where nobody speaks but much is still said. But that's where the personal connection begins and ends, the actor says, bringing the focus back to what he hopes this movie accomplishes, which is a greater awareness of others' struggles. "It was important for me to give voice to the struggles of everybody who’s kind of going through this, day in and day out," Ealy explains.

To fulfill that goal, Ealy and director David Rosenthal set out put audiences through a exhausting, visceral experience. "I’m going to be brutally honest," Ealy says. "I want people to say, 'That was brutal.' I never like to predict what people should take from a movie, because I don’t know if you can set people up in that way, but when I saw this movie with my team, they were exasperated afterwards."

In this sense, the remake succeeds. It is indeed a tiring ordeal, one that invites constant guessing right up until the last moment. In that constant theorizing, we are Jacob. We're invited to not only join him in his descent, but to also be him and experience his dizzying confusion as he tries to parse what's actually happening. "We weren’t trying to make something that was shiny and neat. We wanted to get in and f*ck you up," the actor further explains. "And what really f*cks you up in this movie is how real it could be."

In his review of the original Jacob's Ladder, Roger Ebert wrote, "This movie left me reeling with turmoil and confusion, with feelings of sadness and despair. Those are the notes it strives for." That version's Jacob tries to pick his life back up in New York after the war, but is followed by strange visions and experiences. The quintessential "mindf*ck" element plays itself out in the film's final reveal, which is very different from that of the 2019 version.

This new film takes different steps to wear the audience out and put them in the same frantic state where Jacob finds himself, leading up to a fresh twist on the original's iconic ending. "When [Jacob's Ladder] opens your mind to think about what other people could be going through," Ealy says, "then mission accomplished."