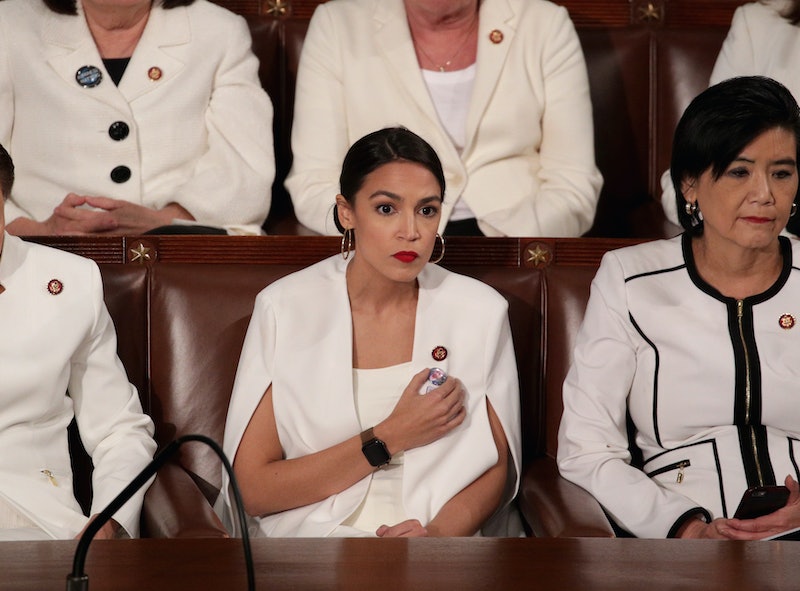 At Tuesday's State of the Union address, several women representatives honored the memory of a seven-year-old Guatemalan girl who died in U.S. custody after crossing the southern border with her father. Women lawmakers wore Jakelin Caal pins that likely served to both pay tribute to the young girl as well as to raise awareness about her death.

At least four women lawmakers opted to wear pins featuring Jakelin Ameí Rosmery Caal Maquin's photograph on Tuesday evening. Representatives Rashida Tlaib of Michigan, Alexandria Ocasio-Cortez of New York, Ilhan Omar of Minnesota, and Ayanna Pressley of Massachusetts all took part in the tribute to Caal. Representative Tlaib also shared an image of the pin on social media, writing in the caption, "We are bringing Jakelin Caal into the room with us during the #SOTU."

As The Hill reported, Caal and her father were part of a group of undocumented migrants that crossed into the United States on Dec. 6. The paper noted that, eight hours after arriving in America, Caal began exhibiting symptoms that included seizures and vomiting. Forbes noted that the child was provided with medical care 90 minutes after first displaying symptoms. The outlet added that a Customs and Border Protection report indicated that Caal later died at a Texas hospital from fever, seizures, and dehydration 27 hours after she entered the United States.

Reuters reported on Dec. 18 that Department of Homeland Security Secretary Kirstjen Nielsen asserted that Caal's death highlighted the dangers of undocumented immigration, which can sometimes involve long journeys through the desert that put migrants' health at risk. President Trump also tweeted on Dec. 29 that he believes Democrats' immigration policies contributed to the deaths of Caal and Felipe Gómez-Alonzo, another child who perished from the flu while in U.S. custody. As the president wrote on Twitter:

Any deaths of children or others at the Border are strictly the fault of the Democrats and their pathetic immigration policies that allow people to make the long trek thinking they can enter our country illegally. They can’t. If we had a Wall, they wouldn’t even try! ...

However, as NPR reported, some members of Congress, including Representative Joaquin Castro, the chair of the Congressional Hispanic Caucus, have called for an investigation into the girl's death, particularly to examine medical resource availability at border facilities. After touring several border facilities on Dec. 18, Castro said via NPR, "We learned today there were some very disturbing systematic failures in how the young girl's condition was handled."

On Dec. 24, 2018, the UN’s special rapporteur on the human rights of migrants, Felipe González Morales, also filed a formal complaint regarding Caal's death. González similarly called for an independent investigation into how children's needs are addressed at American border crossings, The Guardian reported. “Something as serious as the death of this girl should not be left to administrative authorities,” González told the paper. “I want to make sure that judges and public attorneys carry out the investigation fully in an independent manner ... ”

Senator Bob Casey of Pennsylvania noted on Feb. 4 that the United States Government Accountability Office (GAO) is moving forward with an investigation into the conditions faced by children detained at the border. This investigation came to fruition after a large group of senators sent a request to the office to look into the matter.

Overall, several women representatives certainly believed it was important to ensure that Caal was acknowledged and remembered during Trump's SOTU address. You can be sure that they will be closely following the GAO's investigation as it unfolds over the next few months.