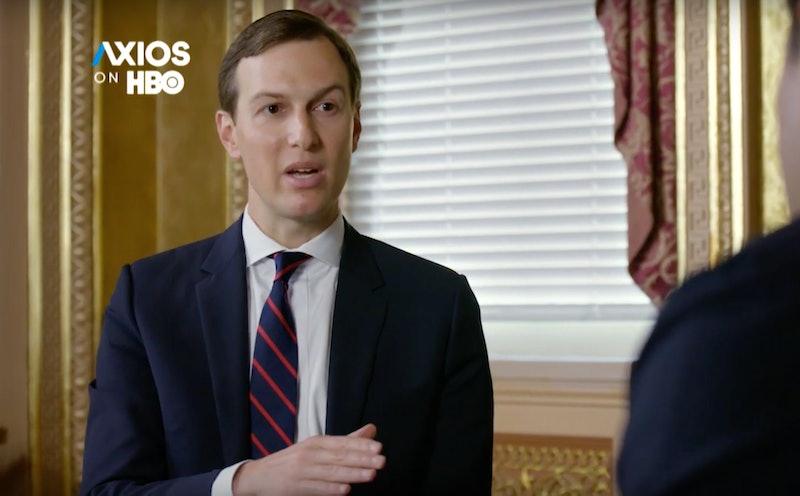 The president's son-in-law told Axios that he's very sure that Trump is not racist in an interview posted to the internet on Monday. He refused to answer, though, whether or not birtherism — the movement Trump helped foment that argues former President Barack Obama was not born in the United States — was racist. Jared Kushner's Axios interview covered Trump's birtherism, but the answer was more of an awkward practice of avoidance than anything revealing Kushner's true thoughts.

The interviewer, Jonathan Swan, started off the exchange noting that Rep. Alexandria Ocasio-Cortez calls the president a racist. Swan then asked if he's ever seen Trump do something "that you would describe as racist or bigoted."

"No, absolutely not," Kushner's answered. "You can't not be a racist for 69 years and then run for president and be a racist. And what I'll say is that when a lot of the Democrats call the president a racist, I think they're doing a disservice to everyone who suffers from real racism in this country."

Kushner responded, "Look, I wasn’t really involved in that."

Swan pushed back, saying, "I know you weren’t. Was it racist?"

"Like I said, I wasn’t involved in that," Kushner repeated.

"Look, I know who the president is and I have not seen anything in him that is racist," Kushner said again, not answering the question. Asked if he wished the president hadn't done it, Kushner repeated that he wasn't involved and that it was a long time ago.

Then Swan transitioned to talk about how Trump campaigned for the presidency on banning Muslims. "Would you describe that as religiously bigoted?" Swan asked Kushner.

"I think he's here today, and I think he's doing a lot of great things for the country, and that's what I'm proud of," Kushner responded.

The president's son-in-law said that he wouldn't say that he disagrees with the president publicly. "When I do disagree, you’ll never read about it in the press, and I wouldn’t say it publicly," Kushner told Swan. "But I will say there’s a lot more things I agree with him on than disagree."

Kushner also deflected a question about the president's views on abortion. "So you agree with him on economics, on foreign policy," Swan told him. "Where do you stand on abortion?"

"Again, I was not the person who was elected," Kushner said.

"So you agree with the president’s position?" Swan asked.

"I’m here to enforce his positions. His position is the one that as a staffer in the White House, we’ll work to push," Kushner continued.

Kushner did acknowledge, though, how he got the job. "The president wouldn’t have been able to get me to work on his campaign had it not been for familial relations, and I guess because I’m related to him, people will make that accusation one way or the other," Kushner said. "I do think that I’ve got a good track record in all the things I’ve done of, focusing on producing results."

Whether he supports those results — at least when it comes to the travel ban and abortion — is less clear.