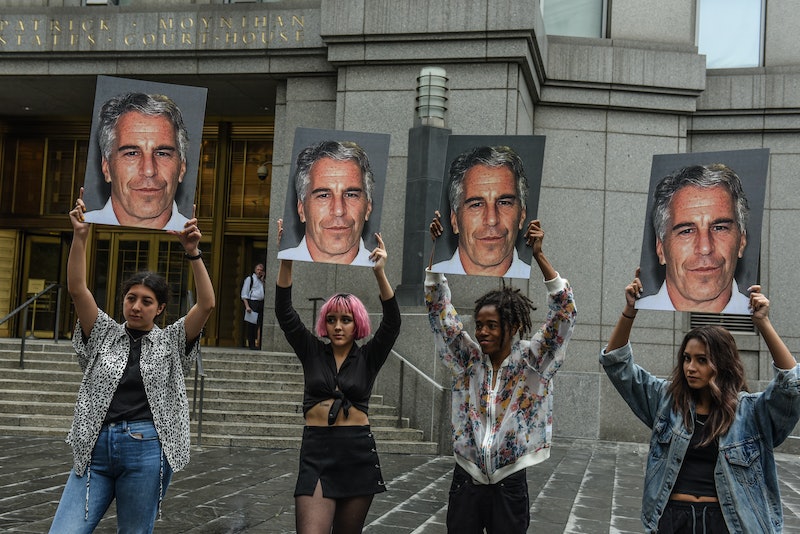 On Monday morning, federal prosecutors in New York unsealed an indictment against billionaire Jeffrey Epstein for allegedly sex trafficking dozens of girls, some as young as 14, at his homes in multiple states between 2002 and 2005. The indictment alleges that Epstein, who made his fortune as a financier and has been linked to both President Trump and Bill Clinton, also paid his victims to recruit new girls "to be similarly abused" by him. He was charged with one count of sex trafficking of minors and one count conspiracy to engage in sex trafficking of minors.

Bustle has reached out to Epstein's attorney, Jack Goldberger, for comment.

Epstein was reportedly arrested Saturday as part of a joint investigation by the FBI and the New York Police Department, according to NBC News. The indictment alleges that he enticed young girls "to engage in sex acts with him" at his homes in Manhattan, New York, and Palm Beach, Florida. He allegedly paid the girls hundreds of dollars in cash afterward. All of the alleged acts took place between 2002 and 2005, and they overlap with previous charges Epstein faced in Miami for prostitution. Here's what you need to know about the new indictment, Epstein's previous charges, and his connections to the Trump administration and other powerful figures.

Who Is Jeffrey Epstein?

Epstein began his career as an investment banker, eventually starting his own company, J. Epstein & Co., which was later called Financial Trust Co., according to NBC News. In addition to helping his wealthy clients manage their money, he also was one of the primary investors in L Brands Inc., which now owns Victoria's Secret and Bath & Body Works, among other brands.

Why Was Epstein Arrested?

This isn't the first time Epstein has faced charges of this nature. In 2008, he pleaded guilty as part of a deal to procuring a person under 18 for prostitution and felony solicitation of prostitution in Miami.

NBC reported that plea deal included a non-prosecution agreement, which is an agreement from the prosecutor to grant amnesty in the Miami area (which includes Palm Beach) if the defendant meets a set of requirements. As part of the plea deal, Epstein had to serve 13 months in prison, register as a sex offender, and pay restitution to his victims, according to CNN. Notably, that agreement included a paragraph that says Epstein could be prosecuted for alleged crimes in other states, which is why he was arrested Saturday and has now been indicted.

The Monday indictment alleges Epstein "created a vast network of victims for him to sexually exploit" in Palm Beach, New York, and "other locations." It references allegations from three victims, two of whom say Epstein asked them to recruit other girls for him to abuse and one who says he abused her over a "period of years." He would also allegedly pay victims even more money if they brought new girls to him.

How Is Epstein Connected To Trump And Clinton?

The 2008 plea deal is where Epstein's connections to the Trump administration begin. The deal was set up in part by Trump's secretary of labor, Alex Acosta, who at the time was the head of the U.S. attorney's office in Miami, according to CNN. In a series of stories, The Miami Herald's Julie K. Brown revealed that the plea agreement was hidden from more than 30 of Acosta's victims and it also concealed "the full extent" of Epstein's crimes. The Department of Justice opened a probe into the case in February, and a judge ruled on Feb. 21 that federal prosecutors under Acosta's watch broke the law by concealing the plea agreement, The Herald reported.

In addition to the connection to Acosta, Brown told MSNBC that Epstein had a "friendly" relationship with Trump. According to New York magazine's 2002 profile of Epstein, Trump said of him, "I’ve known Jeff for fifteen years. Terrific guy. He’s a lot of fun to be with. It is even said that he likes beautiful women as much as I do, and many of them are on the younger side."

Epstein also traveled to Africa with Bill Clinton to work on "democratization" and combating HIV/AIDS, New York mag's profile. Clinton said through a spokesperson at the time:

Jeffrey is both a highly successful financier and a committed philanthropist with a keen sense of global markets and an in-depth knowledge of twenty-first-century science. I especially appreciated his insights and generosity during the recent trip to Africa to work on democratization, empowering the poor, citizen service, and combating HIV/AIDS.

Epstein was also once friends with Prince Andrew, the Duke of York, according to the BBC.

It's not yet clear how much prison time Epstein could face if convicted. U.S. attorney Geoffrey Berman said on Monday, according to CNN, "While the charged conduct is from a number of years ago, the victims -- then children and now young women -- are no less entitled to their day in court." Berman said prosecutors will argue against giving Epstein bail, saying given his wealth and his ownership of two planes show a "significant flight risk."