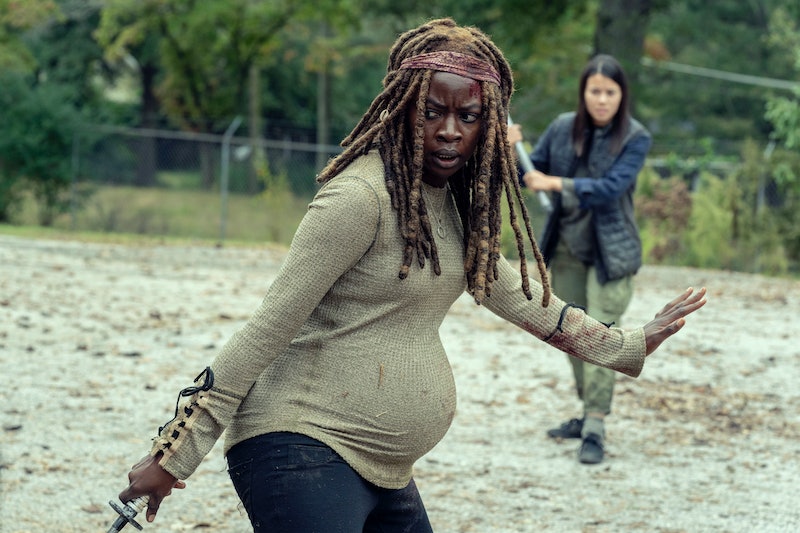 There are three Season 9 episodes of The Walking Dead that fans have been wanting to see for months – Rick’s exit, the explanation of Michonne's isolation and X scar, and the deadly fair. The Michonne flashback episode finally took place on March 17 and the fandom is shocked, to say the least, about her horrific experience at the hands of a former friend. The acting was undoubtedly stellar, but Michonne and Jocelyn’s story didn't fully address why the community leaders had become so distant from each other.

The episode bounces back and forth between the events that caused Michonne and Daryl’s X scars and their current plight with Henry, Lydia, and the fair. The flashback showed a very-pregnant Michonne re-uniting with her close college pal Jocelyn after she showed up injured at Alexandria's gates with several kids in tow.

The episode was action-packed and disturbing, but it presented more questions than answers. It didn’t explain why Michonne and Maggie, who had settled their differences right before Rick’s accident, were so distant from each other just months later. And, it seems like they would have bonded over the shared experience of losing a lover during pregnancy.

Michonne told Daryl in the flashback that she basically felt like she had no friends, so did everyone abandon her before this incident even took place? It’s honestly sad to think about Michonne having no real support system or friends to rally around her as a pregnant woman grieving the death of her man.

"The show’s physical violence against Michonne has been a problem for years, especially when you look at what she has endured compared to her female counterparts."

Tara was also venomously angry with Michonne and it still doesn’t make sense after the flashback. Why would Tara be so upset about Michonne locking down her community to protect them from threats? Surely, she must have heard about the kidnapping at Alexandria. And, Michonne’s philosophy of putting her people first is no different than how Maggie was in the first half of this season.

It’s also not clear if Michonne or Daryl ever told anyone about what they went through or what Michonne had to do to save the children. Michonne is a lot like Rick, so she probably spared everyone the details to protect their fragile hearts while she shouldered the emotional weight. If she did tell the whole truth, then it really wouldn’t make sense for people to not understand why she has become so guarded after this experience.

And, it was way too coincidental for Jocelyn to pop up in Alexandria out of all the places in the continental United States. So, fans basically learned nothing about the world outside of the survivors except that Michonne had a traumatic pregnancy and can’t seem to get any peace. There could have been a dozen other reasons why Michonne would want to protect Alexandria and this extreme display of violence didn’t have to be the way.

The show’s physical violence against Michonne has been a problem for years, especially when you look at what she has endured compared to her female counterparts. A member of the short-lived Claimers hit and threatened to rape her in Season 4, she was nearly beaten to death in the Season 7 finale, and now this latest incident really pushes things over the edge. The optics of putting a Black woman through this type of physical punishment when it has barely (or never) been seen against her White women counterparts is exceptionally unnerving and perpetuates the “strong Black woman” trope.

Michonne has basically been villainized by the other communities, particularly the Hilltop, when all she did was protect them all by getting rid of Jocelyn and her little band of mini murderers at a great expense to her own physical and mental well-being. And, to be fair, Michonne has never been against any of them coming to Alexandria, which was seen when she invited members of the Kingdom to come live in her community.

Michonne and Jocelyn’s tragic story of betrayal and murder answered the question about how the scars came, but it didn’t explain how our groups became so broken. And it really didn't do any justice to Michonne. Really, it was yet another brutal, even gratuitous, display of violence that makes you want to give Michonne the biggest hug ever. Hopefully, she will reunite with Rick soon and get the happy ending she deserves.